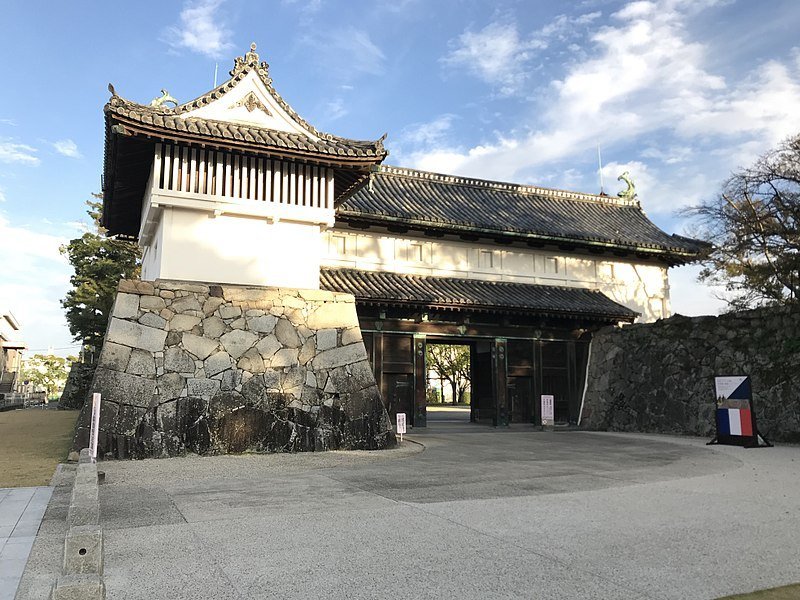 By Japanese standards, Saga Castle is a rather unusual castle. Being built on plains and surrounded by only a wall, whereas most Japanese castles are built on hills or mountains and upon stone bases. This kind of castle is called a hiraijiro.

Saga Castle is closed until further notice to stop the spread of Covid-19.

This castle was built from 1602 to 1611 and was home to the Nabeshima clan, the daimyo family of the Saga Domain. Its nickname, Shizumi-jo, means "Submerged Castle" for the interesting style of rampart that surrounds the castle. With the banks of the moat planted with pine and camphor trees for additional concealment, the castle appears to be almost sinking.

Unfortunately, the castle has seen some destruction. In 1726, a fire destroyed most of the structures; and another fire occurred in 1835. In both instances, the castle was quickly rebuilt. From 2001 to 2004, the main portion of the castle was renovated and today it houses the Saga Castle History Museum. Saga Castle is also the largest wooden castle reconstruction in Japan.

Saga Castle is a unique, lowland style castle located in the heart of Saga-shi, formerly the Hizen Domain.

Hotel Route-Inn Saga Ekimae is without doubt a convenient stay if you are planning to spend time in Saga. It is 35 minutes by bus from Saga Airport and just one minute walk from Saga station of JR Nagasaki Main Line. The hotel is in an excellent location if you want to move around the area, but it is in a perfect location if you want to explore the city too. It is within a walking distance from the main tourist attractions. We can easily reach Saga City Folk Heritage Museum, Saga shrine, Matsubara shrine, Saga Castle History Museum…

A great place for all you can eat pasta, pizza and salads in Saga City.

If you are looking for an impressive shrine, then you should simply visit the Saga Shrine. The shrine is dedicated to the Nabeshima family, the heads of the samurai who ruled the area around Saga before the Meiji Restoration. With two sturdy cannons in front of the shrine depicting the development of advanced weapons in the prefecture, the Saga Shrine is especially dedicated to the tenth lord of the Nabeshima area, Naomasa Nabeshima, and Naohiro, the eleventh lord. After visiting Saga Castle or the Saga Prefecture Museum, the shrine is just a short walk away. A New Year's event will be held at the shrine on December 31 at midnight, with the governor, mayor and other attendees firing a cannon shot to celebrate the year.

The Saga Prefectural Museum serves as a window into the region's archeology, culture, history, and folklore. Alongside the permanent exhibitions on display, the museum regularly hosts special limited-time exhibitions for patrons to enjoy.

A special exhibition taking place at the Saga Prefectural Art Museum looks at works from Kumamoto-born Tatsuya Tanaka, a photographer who focuses on miniatures. His creations are humorous and thought-provoking, and he often uses everyday items in unique ways.