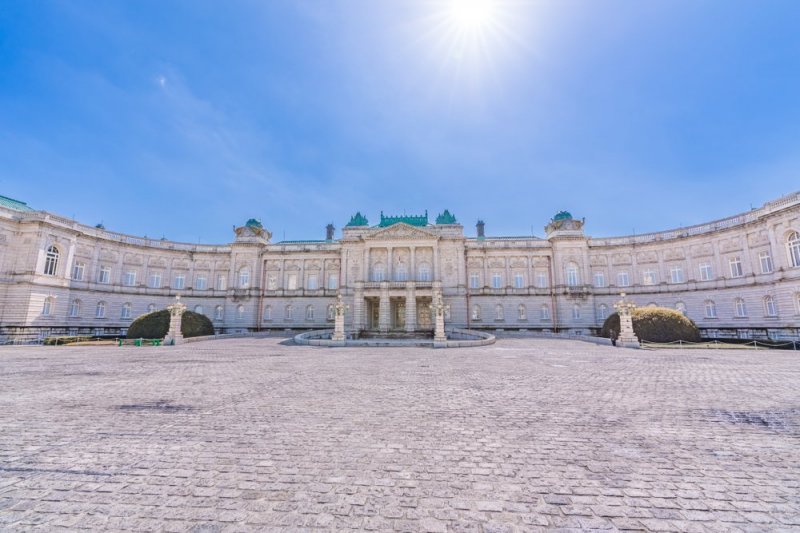 Akasaka is one of Tokyo's more upscale areas, known for its lively nightlife, elegant boutiques and restaurants, and thriving business community.

When it is not officially used, the palace and its grounds are open to the public, making it a must see for tourists and residents alike. Its stately western architecture, with Japanese grounds primarily designed to create a more authentic Japanese ambience for state dignitaries, creates an incredibly impressive backdrop, and the interior of the palace offers sheer opulence and pomp.

The palace also features a range of Western and Japanese art and furniture, as well as samurai-themed decorations. Audio guides are also available to visitors for ¥ 200 (in various languages).

The Japanese Annex (which is primarily used to create a more authentic Japanese ambience for state dignitaries) creates an unbelievably impressive setting and the interior of the palace is pure opulence and ostentation.

PIZZERIA & BAR NOHGA is an all day dining restaurant interpreting a fusion of “Spanish Italian” cuisine and has a kitchen to table design. There is a casual bar area and restaurant where you can take a peek inside the open kitchen whilst enjoying your meal. Visit the cafe for a range of coffees and teas along with an offering of tapas snacks and seasonal desserts. The cafe also offers an assorted dessert and all-you-can-drink cafe set. Breakfast takes on the art of sharing, where a range of platters are combined with focaccia and your choice of eggs cooked your way. Coming for lunch? Choose from a selection of pizzas, pastas and salads. Each lunch menu is accompanied with homemade soup, iced tea and focaccia. Dinner time offers a range of exquisite tapas and pizzas that can also be shared. Breakfast: 07:00 - 10:00, Lunch 11:30 - 14:30, Cafe 14:30 - 18:00, Dinner: 18:00 - 23:00  with last order at 10pm.

The Hie Shrine is a Shinto shrine in Nagatacho, in the Chiyoda district (Tokyo). Its Sanno Matsuri, which takes place on June 15, is one of the three great Japanese festivals of Edo, the forerunner of Tokyo. The procession consisted of the Edo period 45 floats, was accompanied by singers and dancers and was considered to be one of the best festivals in Tokyo. Nowadays the festival takes place on a smaller scale, but is definitely worth seeing. The main god of the shrine is Oyamakui-no-kami, the god of Mount Hie in Shiga Prefecture. This deity is also commonly known as Hie-no-kami, from which the Hie shrine gets its name. The shogun Ieyasu Tokugawa began ruling Japan from Edo Castle. He also became the patron saint of the Hie Shrine and worshiped the deity as the protector of Edo. The citizens of Edo also had a strong trust in the Hie Shrine, where the shogun's patron deity was worshiped.

21_21 Design Sight is a museum in Roppongi in Minato, Tokyo, which opened in 2007. The design museum was designed by architect Tadao Ando and fashion designer Issey Miyake. The building is on the edge of the park area and has 1,700 square meters of floor space, including two galleries and an affiliated café run by chef and restaurateur Takamasa Uetake. The aim of 21_21 Design Sight is to promote understanding and interest in design by involving designers, corporate employees, engineers, craftsmen and the general public. The museum organizes exhibitions on the subject of "everyday life" with multidirectional programs such as lectures and workshops. What is unique is that most of these exhibitions are directed by designers. [Photo: gary yim / Shutterstock.com]

The National Diet Building was constructed between 1920 and 1936 and is where both houses of the National Diet of Japan meet. The House of Representative sessions take place in the left-wing, while the House of Councillors meets in the right-wing. Interestingly, the Diet Building is constructed out of Japanese-made materials, save for the stained glass, door locks, and pneumatic tube system. Plans for the Diet Building began as early as 1880, however, thanks to design disputes, the fall of the Ito government, and two separate fires (destroying the first building in 1891 and the second in 1925) they were postponed. It wasn’t until 1918 when a public design competition sponsored by the Finance Ministry that the design by Watanabe Fukuzo won and a final image for the building was created. Tour of the House of Representatives Free English tours are available of the National Diet, for non-Japanese visitors. Each session takes about 60 minutes, with slots limited and advance email reservation required. They take place every weekday afternoon (3pm, or 2pm on Mondays). Discover more Tour of the House of Councillors A free 60-minute tour can be joined without prior reservation, during visiting hours. A Diet guard will escort visitors through the House of Councillors, taking in highlights such as the Public Gallery, Emperor's Room and Front Courtyard. Discover more