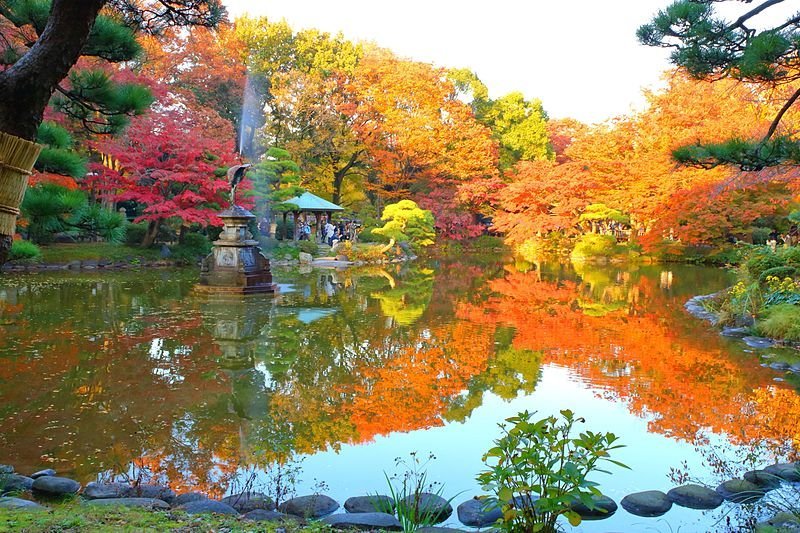 This large green space just outside the walls of the Imperial Palace is the oldest western-style park in Japan. Opened to the public in 1903, the park sits on the grounds of former daimyo (feudal lord) estates. Today, the park is known for its seasonal flower displays and quiet walking paths, making it a relaxing escape in a bustling business district.

The nearly 40-acre park is home to several historic sites. At the north end of the park, the stone walls of the old Edo Castle moat and one of the fortification’s guardhouses stand hidden amongst the greenery. Nearby, a decorative horse fountain hearkens back to a time before the automobile rolled down Tokyo’s streets. On the southern end of the park, the blocky Gothic-style Shisei Kaikan served as the Japan State News Agency during World War II.

The large fountain in the center of the grounds is one of the park’s most popular features and is often illuminated in the evening. Nearby is a traditional Japanese garden, known for its autumn foliage displays and a fountain in its pond in the shape of a crane (the national symbol of Japan). Just beyond that, an open-air concert venue makes for a popular summertime destination. In the northwestern corner lie some of the most coveted tennis courts in the city. Reservations are nearly impossible to come by.

Hibiya Park is also home to some of the first Western-style gardens in Japan and still remains a popular destination for seasonal flower displays. November sees around 2000 chrysanthemums on display, a tradition that began over a century ago. There are also large tulip and rose gardens and a morning glory market in early July.

While Hibiya Park is graced with many leafy trees, one, in particular, has long attracted attention. Known as the “risky ginkgo”, this 400-500-year-old tree was due to be cut down to make way for a road-widening project in 1901. The park designer, Seiroku Honda, resisted, and under his guidance, the ginkgo was instead uprooted and moved a half kilometer further into the park. Remarkably, the tree survived.

Hibiya Park hosts a number of festivals on its grounds throughout the year, from a summer Bon festival to the Fishermen’s Festival in November.

The Nikkan Festival is held each year to celebrate Japanese and Korean cultures. Held in Hibiya Park, the festival lasts two days and features events representing both Japan and Korea.

A two-day farm food festival for children in Hibiya Park, Tokyo. Held on the 10th and 11th of November, the festival aims to teach children about where food comes from, and features lots of hands-on activities.

The Tokyo Christmas Market in Hibiya is one of the most extravagant ones in Japan.

Hibiya park in Tokyo covers an area of 161,636.66m2 between the east gardens of the Imperial Palace to the north, and the Shimbashi district to the south-east.

Hibiya Park is the perfect escape from the noise and the crowds when traversing Tokyo. The park was once home to a feudal lord, served as a military drilling ground, and was urbanized as the first western style park in Japan.

Marunouchi Ondo festival is held at the fountain in Hibiya Park. Starting in 2003, this festival is by far the biggest held in Tokyo to celebrate the Bon Odori dance.

A two-day farm food festival for children in Hibiya Park, Tokyo. Held on the 10th and 11th of November, the festival aims to teach children about where food comes from, and features lots of hands-on activities.

The Nikkan Festival is held each year to celebrate Japanese and Korean cultures. Held in Hibiya Park, the festival lasts two days and features events representing both Japan and Korea.

The Tokyo Christmas Market in Hibiya is one of the most extravagant ones in Japan.

Participants at the Tokyo International Charity Marathon 2020 can be sure to feel they are running for a great cause. Organized by the NPO group Join Life, the “Hope and Live” marathon and live concert event is sure to help you feel good in both body and spirit.

Located right next to the vast Shinjuku Central Park, THE KNOT TOKYO Shinjuku is a modern boutique hotel with convenient access to nearby Shinjuku Station and Meiji Shrine. The 14-floor hotel building was revamped and reopened as THE KNOT TOKYO Shinjuku in August 2018. With more than 400 rooms and 7 room types, the hotel’s Western-style rooms offer top floor park views as well as a newly opened Terrace Suite. From the hotel, it is a 4-minute walk to the nearest station and a 14-minute walk to JR Shinjuku Station. The hotel’s motto was built around its location, centered around the diverse Shinjuku area where people of all backgrounds and lifestyles gather. Hence, THE KNOT TOKYO Shinjuku aims to be the “People’s Park” and “A Place to Gather”. Despite its proximity to Shinjuku city, the hotel offers a place for visitors to escape the hectic city atmosphere by relaxing in the tranquil Shinjuku Central Park. The large urban green space offers respite for tired travelers looking to unwind. In the park, you can also find the Shinjuku Juniso Kumano Shrine, a multi-purpose athletic park, and a small art gallery. THE KNOT TOKYO Shinjuku is within walking distance to Meiji Shrine (1.8km), Shinjuku Gyoen National Garden (2km), the Golden Gai (2.1km), and Kabukicho (2.1km). The area’s diverse offerings allow guests to enjoy a balance of nightlife and serenity — shopping at Shinjuku, bar hopping at the Golden Gai or visiting the serene Meiji Shrine grounds. The in-house dining options include a Spanish Tapas Lounge, Bakery and Tea Stand, and Italian Grill/BBQ Restaurant. Free-wifi and English language support are provided, as well as Tokyobike rentals upon request.

Opened in March 2018, the Pokemon Cafe in Nihonbashi is the series' latest permanent character cafe in Tokyo. The cafe and adjacent Pokemon Center DX store were launched to celebrate the 20th anniversary of the first store back in 1997. The Pokemon Cafe operates on a reservation-only basis, timeslots can only be reserved up to a month in advance. The cafe serves up Pokemon-inspired dishes and drinks, making it a must-visit for fans on their Tokyo Pokemon pilgrimage. Pokemon Cafe Nihonbashi also sells exclusive cafe-only merchandise, as well as limited random coasters and placemats that are given to customers who order specific food items. The menu changes every month or so, depending on the season and game or event the store is currently promoting.

PIZZERIA & BAR NOHGA is an all day dining restaurant interpreting a fusion of “Spanish Italian” cuisine and has a kitchen to table design. There is a casual bar area and restaurant where you can take a peek inside the open kitchen whilst enjoying your meal. Visit the cafe for a range of coffees and teas along with an offering of tapas snacks and seasonal desserts. The cafe also offers an assorted dessert and all-you-can-drink cafe set. Breakfast takes on the art of sharing, where a range of platters are combined with focaccia and your choice of eggs cooked your way. Coming for lunch? Choose from a selection of pizzas, pastas and salads. Each lunch menu is accompanied with homemade soup, iced tea and focaccia. Dinner time offers a range of exquisite tapas and pizzas that can also be shared. Breakfast: 07:00 - 10:00, Lunch 11:30 - 14:30, Cafe 14:30 - 18:00, Dinner: 18:00 - 23:00  with last order at 10pm.

The Toyosu Market is a wholesale market in Tokyo, located in the Toyosu area of the Kōtō ward. There are two buildings for seafood and one for fruits and vegetables. Tourists can observe the market on a second-floor viewing deck. There are restaurants with fresh seafood and produce from the market and shops (Uogashi Yokocho). It is built on reclaimed land in Tokyo Bay. It replaces the historic Tsukiji fish market.Auction tours, events, merchandise sales, and restaurants can be used by general consumers and tourists. [Wikipedia]

The Tokyo International Forum is a multi-purpose exhibition center in Tokyo, Japan. The complex is generally considered to be in the Yurakucho business district due to its adjacency to the Yurakucho Station. However, it is administratively in the Marunouchi district. [Wikipedia]

CD/DVD sales and rentals are on the right and the bookstore is on the left side of the street, about a 5-minute walk from Gotanda Station West Exit. The store stocks a wide selection of video games and comics and everything you could want entertainment-wise.

The newly named Tokyo Sports Square (previously 1000 Days Theater) is sure to be a hit this 2019 Rugby World Cup season! This lively Tokyo Fanzone is bound to get everyone involved excited for the event. Enjoy food, drinks, and stage events while you watch the exhilarating matches on a large screen. It’s perfect for fans who can’t make it to the stadiums—or just want to experience something new. You won’t want to miss out on this rugby information transmission base as you’ll be able to access all the latest updates on your favorite teams. There is also an exhibit of uniforms, photo spots, and mascots. This three-story building is sure to become a name in Tokyo sports news; not only will it be a popular Fanzone for the Rugby World Cup but in 2020 it will also be used to broadcast news about the Tokyo Olympics.