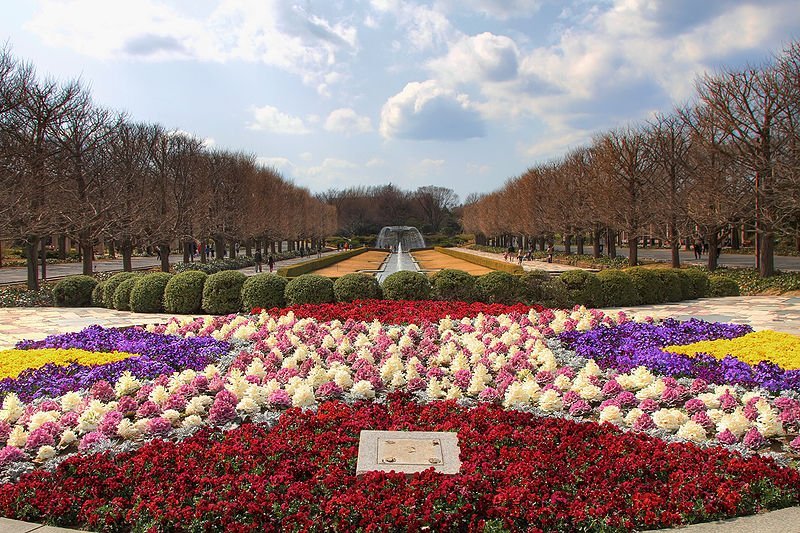 The Showa Kinen Park or Showa Memorial Park extends over the districts of Akishima and Tachikawa and is the largest park in Tokyo with its almost 1.7 km². During World War II, the place functioned as an air force base and was administered by the USA after the war In 1977 the site was returned to the Japanese government and part of it was converted into a park to commemorate the Emperor of Showa.

The Showa Kinen Park offers the possibility to rent bicycles at the entrance and has an 11km long bicycle route. There is also a lake with rowing boats, small stalls for snacks and drinks and barbecue areas.

The park is particularly popular in autumn, when the leaves change color and you can walk through a corridor made of gold-colored ginkgo trees, and in spring when the cherry blossoms are in bloom. The many lawns between the cherry trees offer the opportunity to have a picnic there for hanami. In winter, parts of the park are lit for Christmas.

The Showa Memorial Park is the perfect weekend place to spend time with your family. Here's a glimpse of what awaits you!

Showa Kinen, a large park just a short walk from JR Tachikawa Station, is one of the first places in the Tokyo region to see fall foliage.

There are plenty of reasons to visit Japan during summer and the abundance of firework displays is one of them! Originally used to ward off evil spirits in Japan, fireworks (Hanabi) have since evolved into an appreciation for beauty amidst cool summer evenings.

Every year, a huge number of visitors -- both locals and tourists -- flock to the Showa Kinen Park in Tachikawa City, a huge multi-purpose park located at the western part of Tokyo.

The Showa Kinen Park in Tachikawa, Tokyo hosts the incredibly beautiful spring Flower Festival. Colors, scents and designs stretch as far as the eye can see.

Showa Kinen Park was established to commemorate the 50th anniversary of Emperor Showa's reign. A pleasant place to stroll, check out the bonsai in its Japanese Garden .

163 hectares of pure contact with Mother Nature. Japan never ceases to amaze with its beautiful parks, and this may be one of the best!

Say good-bye to summer in the company of 70,000 cosmos flowers.

Tokyo outside Festival × Outdoor Festival 2020 is an event celebrating the great outdoors at Tachikawa's Showa Kinen Park. There will be opportunities to engage in craft activities and sporting events, appreciate flowers and greenery, and more.

Head to the adult sanctuary at Water Hotel S and relax away from the busy Tokyo life.

To satisfy your cravings for Korean cuisine, try Kusa No Hana at Granduo, just a few strides from Tachikawa Station.

Cafe Bar Foret is a small pleasant Italian cafe and restaurant in Mori Town in Fussa City in the western part of Tokyo.

Want to up the ante on your regular melon pan? At The World's Second Best Melon Pan, you can do just that - they turn them into ice cream sandwiches!

Sanrio Puroland, or Hello Kitty Land, is an indoor amusement park based on the popular character" "Hello Kitty" ". The amusement park, which opened in 1990, is located in Tama New Town in Tokyo and also shows other characters from the Sanrio company (My Melody, Cinnamoroll, Gudetama etc.). Sanrio Puroland has over 1.5 million visitors a year and is 4.5 hectares in size. The on-site attractions are suitable for children of all ages. The parades of Hello Kitty and other Sanrio characters are also highly recommended. The park also has themed restaurants and shops dedicated to specific Sanrio characters that sell exclusive goods.

In 1993, the seven-acre Edo-Tokyo Open Air Architecture Museum was opened by the Tokyo Metropolitan Government as part of the Edo-Tokyo Museum. The aim of this museum is to preserve historic buildings of great cultural value that are not in their current location can be relocated, reconstructed, preserved and exhibited and this valuable cultural heritage can be passed on to future generations. The open-air museum offers the following exhibitions: An introduction in the visitor center. Restored buildings and scenes from everyday life in the Edo period. Architectural remnants and recreation of an urban landscape A collection from the Original Musahino Folklore Museum in a special exhibition. The various exhibitions can be viewed within the exhibition rooms or in the actual open-air museum.

Eric Carle is the author and illustrator of the iconic children's book "The Very Hungry Caterpillar". The Play! Museum in Tachikawa is hosting an exhibition titled Eric Carle: Book to Play, which allows visitors to connect with his work through fun activities.