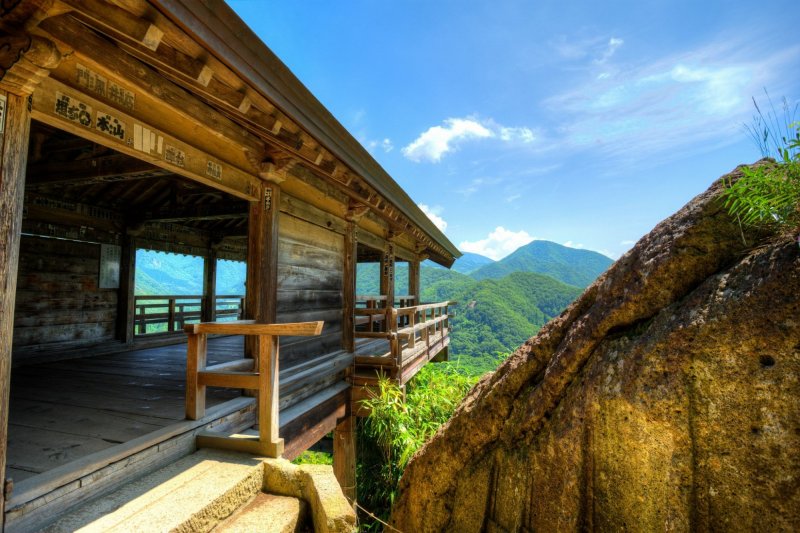 Yamadera is a temple complex on a mountain top northeast of the city of Yamagata in the prefecture of the same name. Its official name is Risshakuji, but it is largely known as Yamadera (literally the" mountain temple ") as it climbs up a steep mountain over several levels It is considered a place of particular beauty and is a registered historical site.

The temple was built in 860 by the priest Ennin and at that time belonged to the Tennai sect. It was expanded during the Kamakura Shogunate before being destroyed after a fire in the 13th century and then rebuilt and made into a Zen temple.

The temple grounds begin at the foot of the mountain and lead up over 1,000 steps and several levels. The unusual location on the sometimes steep mountain slopes as well as the embedding in the surrounding nature inspired the well-known poet Matsuo Basho, who wrote one of his most famous haiku poems here. There is also a museum dedicated to him near the temple, in which one can admire his works.

Yamadera is served by its own self-named train station, which is located on the JR Senzan line that connects Yamagata City and Sendai.

Risshakuji is a temple complex of the Tendai Sect in Yamagata Prefecture. Its temple buildings are built up and in the side of a mountain, thus it is known as Yamadera.

Yamadera: The Temple in the Mountain

Yamadera - "temple in the mountain" - fully lives up to its name: famous haiku poet Basho penned a poem here in praise of the place.

Climbing Yamadera is an enjoyable challenge easy with a grand panorama from the summit. Along the way up there are numerous temples and fantastic views of the surrounding nature.

Atmospheric in every season, Yamadera is perhaps at its most beautiful in early November when the leaves turn a variety of rich reds and oranges.

Hiking Up to Yamadera

An enjoyable day trip to the historical mountain temple of Yamadera.

Yamadera: Temple in the Clouds

Yamadera in Winter. Scenic beauty of a mountain temple in snow and ice

Yamadera is a lovely place anytime of the year, but on summer evenings you can take your time and watch the sun set over the valley.

Yamadera is a location of a mountain temple. Climb to the top and view the entire valley below. Get detailed direction to the location for those traveling by train and those by car. Find out about the temple's long history and even its special spiritual power.

The Enchantment of Yamadera

Atop the mountain lies a place rich in history and marked by wondrous beauty.

This business hotel is the most convenient place to stay in Tendo.

Rustic, handmade soba, available even during the off-season at Yamadera, Yamagata.

An old cargo train carriage turned in a cafe. A lovely atmosphere and great coffee in this location in Yamagata City.

The temple at Yamadera isn't all there is to see - give your body a rest and let your mind learn about Japan's most famous haiku poet.

Montedio Yamagata is one of the few pro sports teams in Yamagata Prefecture.