Hiking Up to Yamadera

An easy and scenic day trip from Sendai

Yamadera literally means Mountain Temple and is an appropriately named place as it is home to a temple complex built into the side of a mountain. The temple's official name is Rissakuji and it is over one thousand years old with as as many steps connecting the buildings and leading up the mountain.

We were staying in Sendai which is the nearest big city and is a good place from which to make a day trip out to Yamadera. We caught an early rapid train from Sendai Station and enjoyed a pleasant one hour ride though the countryside and mountains. It was nice and sunny outside with only a few clouds and therefore perfect for outdoor activities, or so we thought. Once we got off the train at Yamadera Station we realized that is was actually extremely windy! It was strong enough that we had to make sure the things we were holding didn’t blow away and we had a lot of trouble communicating with each other!

The temple entrance is located within walking distance of the train station and we consulted one of the big maps near the station to see how to get there. From the map it looked like there were three sets of stairs leading up into the temple. We thought we'd go up the western most stairs but unfortunately could not find them and had to walk back to the middle ones. Once we found some steps and started climbing the mountain, the terrain and trees blocked the gale’s onslaught, which was a relief.

Sold throughout the temple are Tama-kon which are a food like substance made of balls of konjak root cooked in soy sauce and served on a stick. Apparently they're supposed to give you stamina to make it to the top and they are also allegedly Kilojoule free. The sticks were sitting in browny black pots and looked a little unappetising to me. My partner Kate, lured by the low energy claims, was brave enough to buy some and liked it enough to finish the while stick. I tried some of hers and while the flavour was alright, I wasn't really sold on the texture.

Once we had finished our stamina boost, we started climbing the many steps up the temple. One thing that we found amazing was the amount of elderly people climbing all the way up the mountain — walking sticks and all. The walk up was very scenic and the temple grounds featured many historically and culturally important buildings, gates relics and statues. One of the statues we recognised was the famous poet Basho who visited the temple around four hundred years ago.

About half way up we encountered a cliff absolutely full of 1 yen coins. Some of them were very precariously balanced or wedged into the cliff face. One yen coins are a really popular denomination to offer at temples and as I added mine to the cliff I wondered how many go out of circulation and if this causes any problems for the Japanese Mint. About nine elevenths of the way up there was a level path leading up to a great viewing platform that provided excellent views of the temple, town and surrounding countryside. Since it was mid autumn many of the trees had begun to show their bright red and orange autumn colours. Once we finished enjoying the view we continued to the Daibutsuden Halll which contains a big statue of the Amida Buddha and is located right at the top of the temple

On the way back down we saw what looked to be some kind of lichen growing out of the rocks — except it was squirming! It turned out it was some kind of weird bugs and a nearby lady selling temple goods said they did it to stay warm!

After making our way back down it was lunchtime and we managed to find a nice Tempura restaurant with a good view of the river. The food was delicious and I got some vegetables in the form of pumpkin, eggplant, chili (skipped) and a green leaf thing. There were also one or two prawns, soba noodles and miso soup! It was extremely delicious!

After lunch we walked back to the train station, caught the next train and were back in Sendai by about 3pm. 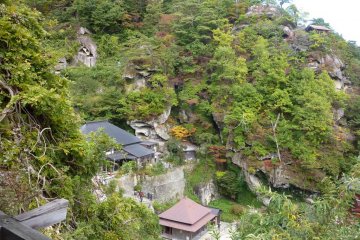 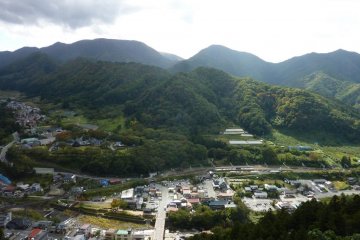 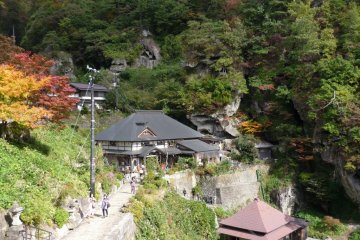 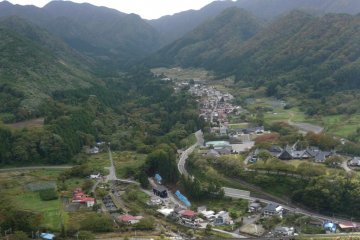 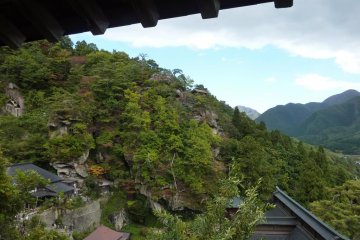 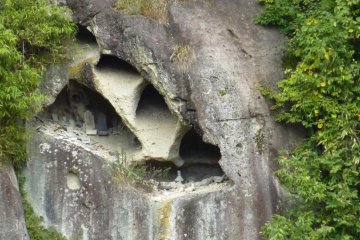 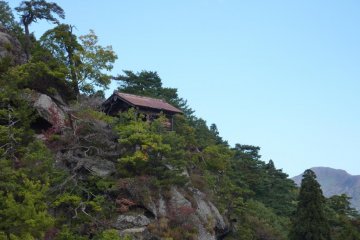