A mountain shrine standing under the gaze of Mt. Fuji

Mt. Komagatake is a 1357-meter high lava dome, created by a Hakone volcanic eruption 40,000 years ago. Almost 2400 years ago, the top of this mountain became a holy precinct for mountain ascetics. They deeply felt a sacred dignity for Mt. Koyama (the highest point of the Hakone Mountain range) and Mt. Fuji beyond it.

In 757 (around the time Priest Ganjin established Toshodai-ji Temple in Nara), Hakone Shrine was established at the Ashinoko lakeside for the purpose of praying to Mt. Koyama. People never climbed Mt. Komagatake except on special, rare occasions because they were afraid. After that, for a long period, people held ceremonies and festivals at the lakeside Hakone Shrine.

This religious practice eventually changed, and in 1964, Yasujiro Tsutsumi, a Japanese politician and businessman (and also the founder of the Saison Group) donated a hall of worship for the top of Mt. Komagatake. Tsutsumi had already helped to successfully develop Hakone as a resort area, so he had a lot of power. The hall was named Hakone Shrine Mototsumiya, and is now admired together with the original lakeside Hakone Shrine.

We can reach the top of Mt. Komagatake in only 7 minutes by using a comfortable and convenient ropeway. The ropeway’s lakeside station is at Hakone-en. The total length of the ropeway is 1800 meters, and a return ticket for adults costs 1050 yen. Going up and facing the mountain, you’ll see Mt. Fuji and a chain of Hakone mountains on the left; Odawara, Yokohama, Ohshima Island, and Sagami Bay on the right; and Ashinoko Lake and Suruga Bay behind you. Below you is an afforested area of Japanese cedars halfway up the mountain.

The view from the top

The top of the mountain is covered with undergrowth only. There are no trees, indicating that a lava flow there hardened, and so plants couldn’t grow well. But basically, the paths are well prepared. At the very first, your eye will be captured by red shrine pillars and a red gate against the blue sky. It’s so impressive! If you go left behind the ropeway station, a magnificent Mt. Fuji view is waiting for you. If you go along the path to the right, you will look down a gentle ridge of mountains, and view Sagami Bay and Odawara beyond them.

Then go ahead up to the shrine. Just before the red shrine gate, there is a rock with a sacred straw rope. It is called “Bakou-seki” meaning that God came down on the rock with his white horse. They say there are some holes in it from where the horse stepped. Go and stand in front of the shrine. If you feel something, please feel free to join your hands in prayer before the altar.

You might wonder about some cube-shaped rocks that are scattered around in the back of the shrine. Those rocks had been used for various rituals in the old days. We have a great view of Mt. Fuji from there, and I can imagine that those ceremonies were surely performed under Mt. Fuji’s grace.

The best timing to go

If you would like to get a nice clear view, a winter morning is your best bet. The later in the day, the hazier it gets. Sunset in late autumn and winter is another good chance. But compared to mornings, the probability that you will see the great mountain and other wonderful views is much lower. 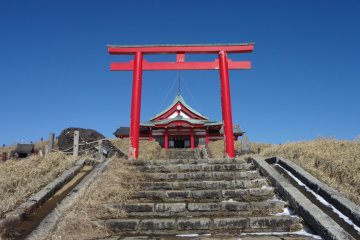 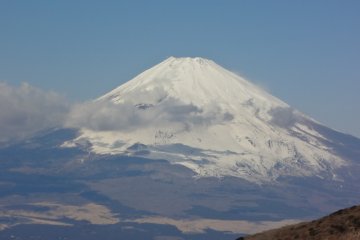 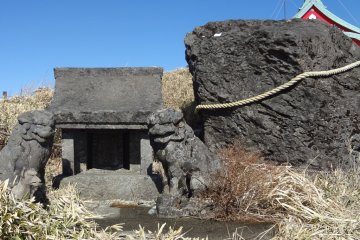 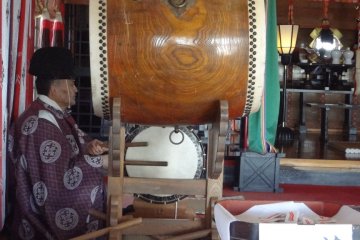 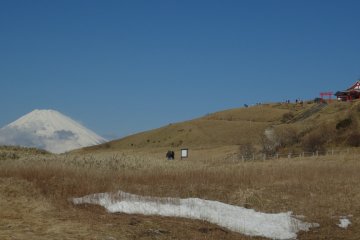 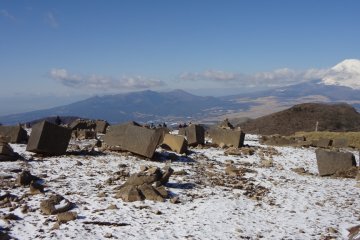 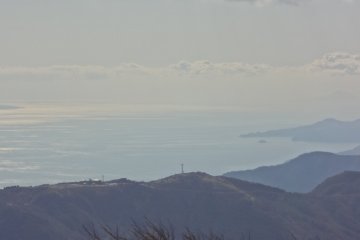