The sea behind the sea in Shimane and Tottori

Lake Naka Umi is the fifth largest in Japan and is located between Shimane and Tottori Prefectures. It owns the distinction of having four cities on its shores. Matsue, Yonago, Yasugi and Sakaiminato all call Lake Naka Umi home. The lake is like a galaxy in the universe of Japan.

The environment of Lake Naka Umi is as variable as the cities that line its shores. There are nature preserves where waterfowl feel no sense of fear towards humans. If you walk towards them they just stand there and look at you. There are the multitude of temples and shrines that occupy the mainland. You can actually camp on what is essentially a Shinto shrine. There are factories that use the same chime as Big Ben to mark the changing of the working hours. Two islands sit inside the lake. One is called Daikon Island and the other Eshima and both are connected to the mainland by bridges.

Although it is a lake, Naka Umi is not referred to as such in Japanese. Its name means “inner sea”. I have read that the reason may be because of the amount of salt in the water due to mixing with the Japan Sea. I like to think that it is because of the lake’s sheer size. I camped out on the shore once and I noticed that I could see the peninsula of Sakaiminato running perpendicular to its Shimane counterpart. From that perspective I couldn't see the Japan Sea but I knew it was there because it dominated my view on the way in.

A promenade lines the shore of the Yonago City side of the lake. There is a statue of three children dressed in school clothes and kimono walking into the future. This area is also the location of a city children’s center.

The presence of four cities around the lake means that in summer there are several fireworks festivals happening around the same time.  Mid-August is the best time to be there if you want to enjoy the light show.

You can get to Lake Naka Umi via Yonago or Yasugi Station for the quickest access and of course you can make it there from Matsue Station if you’re in that neck of the woods. A visit to Lake Naka Umi is a trip to a unique world. 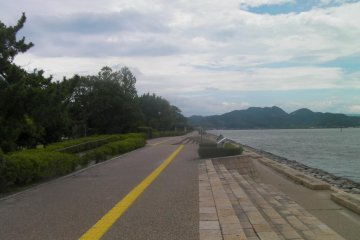 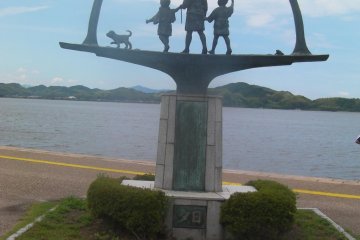 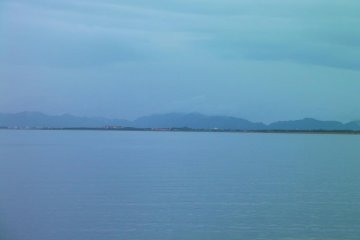