A Day in Tokyo's Sumida Ward

Sumida ward is one of Tokyo's most influential districts for Edo-period culture and follows a number of Tobu Railway lines crossing through the region. Here's an itinerary outline for how to spend a wonderful day out in Sumida ward.

Think of Japan, and it is The Great Wave that springs to mind. No artwork is more iconically Japanese.

This famous woodblock print depicts a wave leaping with impressive fury towards the sky, just moments before its inevitable breaking. The empty space beneath the wave’s curving underbelly frames Mount Fuji on the horizon, while three flimsy fishing boats lurch in the water beneath. Spray from the wave falls as if like snow upon Fuji-san`s peak.

Reproduced thousands of times since and inspiring countless modern interpretations, The Great Wave Off Kanagawa is one of Katsushika Hokusai’s Thirty Six Views of Mount Fuji, and but one of the numerous works of art he produced during his prolific life. It has inspired minds the world over, from Impressionist artists to Debussy, to modern artists. On 30th October 2010 Google even celebrated his 250th birthday with a special doodle:

Last November, a gorgeous new museum dedicated entirely to Hokusai opened in Tokyo's Sumida Ward. Sumida Ward holds special significance in Hokusai’s life, as it is where he spent the majority of his 90 years, even though it is said he moved house 93 times. In addition to the well-known and well-loved Great Wave, the museum offers an in depth look into Hokusai’s life told through state of the art technology and multimedia displays.

Not only can visitors read about each work in detail, they can even engage in fun activities such as designing a kimono using Hokusai’s patterns, or seeing a life size replica of the artist at work. For those who watch closely, there is a surprise in store! The museum itself is stunning, rising elegantly into the sky. You feel as if you have stepped into Hokusai's world of ukiyo-e, or “Floating World”.

Tokyo Skytree is purposefully designed to look like the curving sabre of a Samurai sword. Be it day or night, the tower provides unbeatable views of the Tokyo that inspired Hokusai, among many others. Take a ride to the Tembo Deck, where at 350m above sea level you will be able to spot some of Tokyo's most iconic sights and quite literally experience the sensation of floating above the world.

For lunch, there are all manner of restaurants and snack shops in the TOKYO Solamachi area where you can choose between 300 different options, including a themed cafe for Moomin lovers!

End your day with a tranquil stroll along the banks of the Sumida River, about a 10 minute walk west of Tokyo Skytree. Each spring, the grounds are festooned with dreamy garlands from 1000 cherry blossom trees while in July, the park is host to the largest firework display in Japan. Hokusai loved capturing scenes of the Sumidagawa in his woodblock prints, so be sure to take a look while you are at the Hokusai Museum. 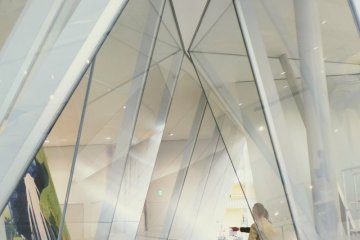 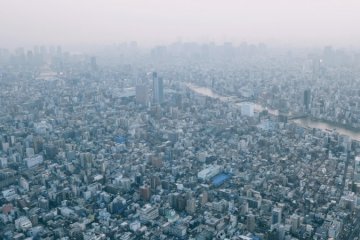 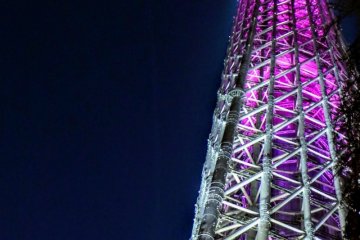