Dance all day and night at this Tokyo trance event

On the Tuesday of Golden Week, a friend and I made our way out to AgeHa nightclub in Shibuya, arriving around 2:00pm. A nightclub, but 2:00pm? Yes. We were there for the daytime leg of Matsuri Tribe, an event run by Japanese trance label Matsuri Digital, promising several hours of DJs and bands performing throughout the club's different rooms. We were ready to dance and dance.

Before we could go in, though, we had to deal with the needlessly officious ticketing policy. We'd turned up expecting to be able to pay on the door, but for some reason, daytime-only tickets were available only by advance online sales, and it looked as if we'd be expected to pay the full cost of both daytime and all-night event. Why? Fortunately, one of the organizers could speak good English, apprehended how unimpressed we were, and allowed us to pay only for the daytime.

So once we were in, we set about getting the lay of the land. The main room wasn't open yet, so we wandered around the outdoor part, which was set up like a mini-festival, a tiny outpost of Glastonbury. There were a handful of food stands, a market with stalls selling clothes (lots of tie-dye), jewelry and accessories, and already a decent number of people. Watching the crowd was fun too: it was a mix of twenty- and thirtysomethings, many with kids, dressed colourfully, casually and comfortably, with lots of loose, bright clothes, dyed hair and dreadlocks on show. It certainly put the lie to the idea that Japan is a land of suits and stifling conformity, best demonstrated by the one guy in white pants and short white trenchcoat, with a flowing scarlet scarf.

The music had already started, with three spots to choose from. Indoors there was a chill-out space, where you could take your shoes off and relax with mellow tunes, carpeted floor and pastel lighting. (I say "you" because I didn't spend much time there myself.) The 'Box' room outside had attracted a good few people, happily dancing to bouncy minimal techno, while by the pool we could admire the view over Tokyo Bay while gently bopping to mid-tempo electronica, played by a DJ who looked about twelve years old.

When the main room opened, the opening act was Gocoo, a boundlessly energetic troupe of taiko drummers, and wow, were they great... they set the tone for the whole day with pounding rhythms and exuberant dancing. The whole room - and it's a big one, holding 2000 people - was full of excitement, with the crowd being led on by podium dancers in luminous psychedelic costumes, and a festival queen being carried around in a contraption that looked like a mikoshi portable shrine crafted from a rhinoceros.

The next few hours I spend enjoying the atmosphere and music (and very reasonably priced food and drinks). The crowd was full of friendly, happy faces, and I made friends with people from as far afield as Poland and Peru. I also had a quick chat with a couple of members of Gocoo before the start of a drum workshop they held - it was nice to get out into the open air and watch kids enjoying themselves beating he big drums. I did lots of dancing too, especially to Green Nuns of the Revolution - though I was disappointed that 'they' were just a lone shaven-headed DJ - and the driving percussion-led grooves of HiLight Tribe, who left the crowd, including me, bathed in sweat and screaming for more. 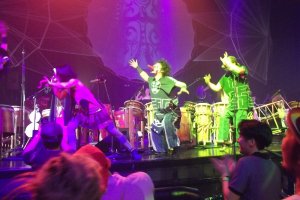 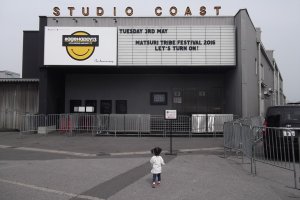 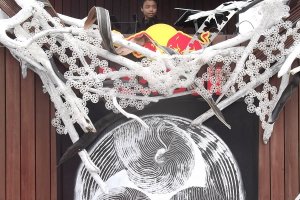 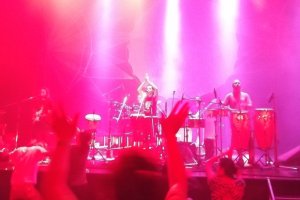 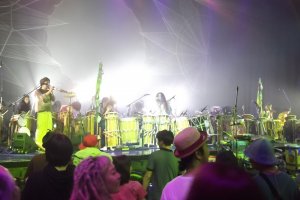 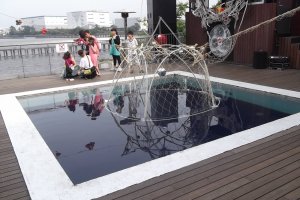