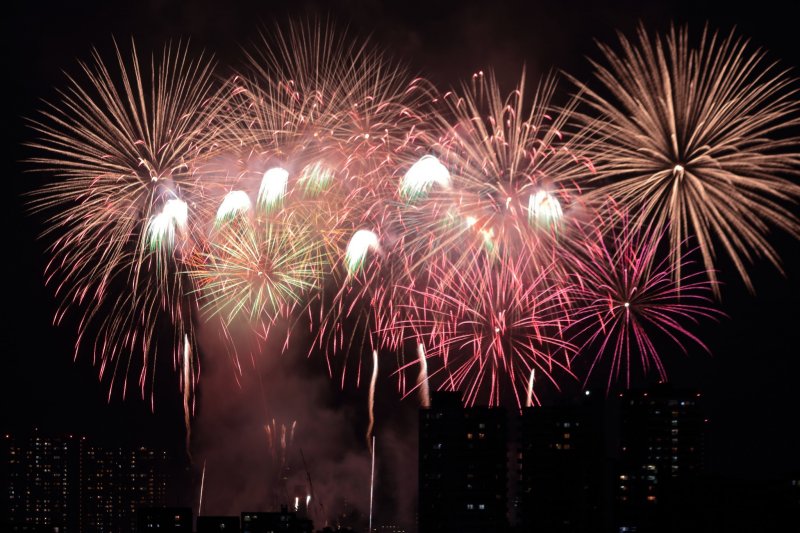 A summer's night filled with lights and laughter

We've all probably seen fireworks displays before and I guess most people may not work viewing a fireworks festival into their travel itinerary so it came as a big surprise, a very pleasant one, when I attended one of the many fireworks festivals in the Tokyo area. Starting mid/end July and throughout August, there are many 'Hanabi Taikai' (fireworks festival) around Tokyo and other places, something essentially linked to summer.

I went to a previous Edogawa Hanabi Taikai. This particular fireworks festival happens every year on the first Saturday of August. I found out later it is actually 2 fireworks shows held together and the Edo river runs through the middle. On one side of the river is Ichikawa City, Chiba, and the other side is Edogawa-ku, Tokyo, which makes the show more fun as both sides try to outdo each other. For the full festival experience, you can dress in yukatas (summer cotton kimono) and buy food from the many yatai stores (food stalls) just by the river banks.

I was lucky to be invited to share a picnic mat with other friends. Picnic mats/sheets are a serious matter as some people stake their space up to a couple days prior to the actual event. I've read that rules have been set up and sheets are only allowed to be placed from afternoon, the day prior. Anything placed before that will be removed by a security patrol teams. It's a fun experience to be able to enjoy this much like the locals do. Everyone who attends contributes food or drinks to share. You'll feel like you know everyone else even though you just met, and laughter is heard all around. The whole atmosphere is awesome and it comes with the orange glow from the setting of the evening sun. Once it gets dark, commentary over the PA systems is heard and music starts to play in sync with the fireworks. 90 minutes seem to just fly by in the blink of an eye.

From a foreigner's point of view, it's incredible: from how orderly people are while getting out of the stations, how they pick up their own rubbish, to the hospitality they extend to everyone. A point on the rubbish: people are encouraged to bring home their rubbish, as rubbish left at the site is cleared by students and volunteers the next day so it would bring a little more enjoyment to everyone if everyone shares the load and just brings back their own.

Post the fireworks, the train stations will be congested. If you aren't in a rush to get back, what we did was a slow walk to the next station before we got on the train to head back home.

It is a wonderful experience and definitely recommended for anyone who will be in Japan in summer to do.

It would be good to get to the stations by the evening and head to the bank. In the case of rain, the event may be cancelled so it may be a good time to bring out the teru-teru bozu.

My first trip to Japan coincided with SARS and that almost cancelled our trip but I was too stubborn to give up. Traveling on a budget with a friend, we went from Osaka to Hiroshima then up to Hokkaido before heading back up to Tokyo. I had the best time of my life. I was hooked. From then on,...