Delicious gyoza with a unique spin in Sugamo

I've come to realize something during my time in Japan - if there's a line forming out the door at a food establishment, it's almost a guarantee that what's served up inside is delicious. Fight Gyoza, on a small street off Sugamo's Jizo-Dori shopping area, is perhaps the best gyoza I've enjoyed during my time in Japan. One thing you may notice though, is that they don't look like the gyoza you may have accustomed yourself to.

The secret to the gyoza here is that they use a different outer "shell" - instead of your usual thin, chewy gyoza wrapper these are wrapped in a more doughy exterior. They're also deep fried in a wok rather than pan fried and steamed, which means that they take a little longer to be served. The menu itself says to allow 15 minutes for your gyoza to be prepared, but they're well worth the short wait.

The prices here are incredibly reasonable too. If you want to go down the route of only trying the gyoza, you can get 10 pieces for only ¥480 - an absolute bargain considering how filling they are. There are also set meals where you can get ramen and 5 pieces of gyoza (¥790), ramen, a half serving of rice and 5 gyoza (¥920) or fried rice and 5 gyoza (¥890).

The atmosphere inside the store is lively and communal. Depending on how many people you're eating with, you may be seated at a table or on the counter with other patrons - but that's part of the fun!

Do note that the store is cash only, and they're closed on Tuesdays. They also close on weekdays between their lunch and dinner sessions from 2pm until 5pm.

Fight Gyoza can be found just off the Jizo Dori shopping street in the Tokyo suburb of Sugamo. It's less than 10 minutes on foot from Sugamo Station itself, which is serviced by the JR Yamanote Line and the Toei Mita subway line. 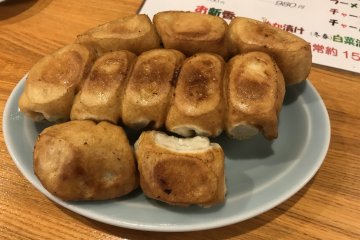 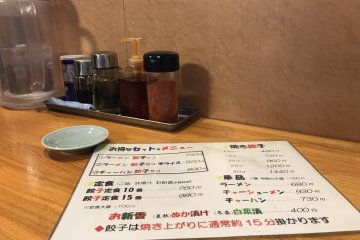 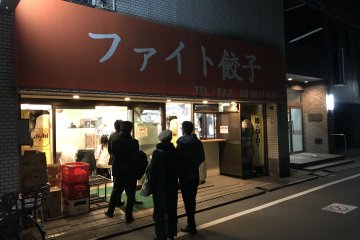