Silence with a dragon above you

It's not an uncommon thing in Japan to be walking down a busy commercial street only to find yourself in front of a silent space. Shinto shrines are good for that. No matter where they are, they seem to have the uncanny ability to stop sound.

So it really shouldn't be a surprise then to find such a shrine in the middle of one Tokyo's most upmarket residential and commercial districts. Nestled amongst the more glitzy districts of Shibuya, Roppongi and Ebisu and filled with an international vibe courtesy of its non-Japanese population, Hiroo ought to be the last place you'd find a traditional Japanese Shinto shrine.

But of course, this is Japan and you will find a Japanese Shinto shrine. A quiet one too because, again, that is what these shrines do. They absorb the noise of the outside world leaving you with a clear feeling of separation between the mundane and the divine.

Hiroo Inari Jinja is a shrine that was established at the end of the 16th century by the second Tokgawa shogun, Hidetada. As the story goes, Hidetada enjoyed falconry and decided that a place of rest was called for during his visits to the area. On his command an Inari shrine, one commemorating prosperity, was built for that purpose.

As expected, there is some fine woodworking detail on the building but what sets this particular shrine apart from others like it is the ink drawing of a dragon on the ceiling of the main structure. Painted by the famous painter Yuichi Takahashi in 1847, the artwork has been designated an Important Cultural Property of Minato Ward.

To see the dragon, you will need to ask permission of the staff at the shrine shop to allow you to enter the building. Purchasing a goshuin seal stamp from that shrine shop should make it easier for the staff to help you.

Take the Hibiya Subway Line to Hiroo Station and head out of Exit 1. The shrine is about a 2-minute walk. 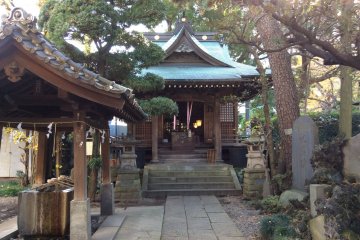 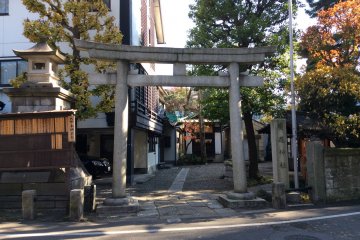 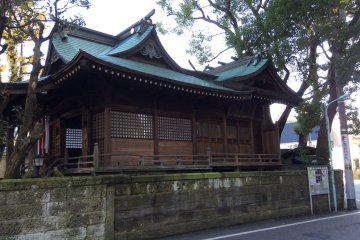