A charming little Japanese garden space nestled in amongst the residential areas of southern Tokyo, Ikedayama Park is one of Japan's many quintessential public spaces designed in the traditional way. Featuring all of the elements that make up a traditional garden in Japan, the park turns out to be one of those lovely places to relax and regenerate.

The park's decent sized pond is naturally the highlight for many visitors, and filled as it is with the ubiquitous koi carp fish and turtles that are common to Japanese garden ponds, offers a traditionally-minded sense of serenity. Adding to that feeling is the multi-layered landscaping. Created on a small hill, Ikedayama Park spreads out over a number of levels where the pond and surrounding garden can be admired. The covered park bench at the top makes for a perfect spot to take in the atmosphere, relax and while the time away.

The love and appreciation of nature is very much in evidence here. Pathways and views are all designed to be able to take in and enjoy the park's eruption of flora. Many varieties of plants can be found here including the obligatory sakura cherry blossom, ajisai hydrangeas and tsutsuji azaleas. Budding botanists and gardeners will appreciate the trees with edible fruits like the zakuro pomegranates, kaki persimmons and even kuri Japanese chestnut.

The pond's stone bridge - sans handrail - is quite charming and the steps carved into the hillside are organic enough to remind you of the value of appreciating nature's primacy. Courtesy of the park's trees, a sunny day will bathe the grounds in dappled lighting, a phenomenon known in Japan as komorebi.

Gentle, elegant and tranquil, Ikedayama Park is another one of Tokyo's hidden little gems.

Take the Toei Mita Line, the Metro Namboku Line or the JR Yamanote Line to Meguro Station. Ikedayama Park is about a 10-minute or so walk from the Main Exit. 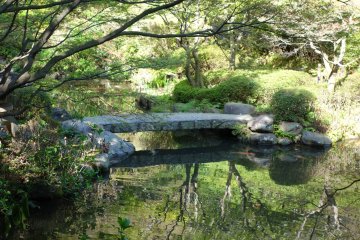 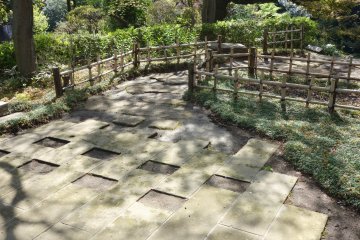 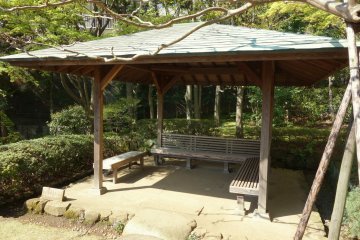