An oasis of calm in the heart of the city

Tokyo has a reputation for being the ultimate concrete jungle, and in many places it's easy to see why. However, for every cluster of skyscrapers, the city also holds a tranquil park or garden, and one of the most agreeable must be Kiyosumi Tei-en. It's only a short ride on the subway from the urban bustle, but once you step through the gate you'll find yourself in an oasis of calm, far removed from the crowds and noise.

The garden is designed around a large pond, with a few islands which provide places to rest for its resident ducks and turtles. A good place to start a circuit of the pond is the path of broad stepping-stones in front of the Taisho Kinenkan, an elegant wooden memorial hall next to the entrance. As you step from one stone to the next it's fun to watch the shoals of carp who swim to the surface hoping for tidbits, or to throw pieces of bread or rice-crackers for the ducks to squabble over.

Strolling slowly around the pond you`ll become more relaxed, watching as the reflections change with every few steps. The garden originally opened in 1880, and it's easy to imagine being transported back to that time, such is the insulation from the noise of the city. When you round the south-east corner of the pond you come to the garden's largest hill, which may have been named Fuji-san because of the profusion of azaleas which bloom brightly on its sides every spring.

Set back from the pond's southern shore is a serene open space, a good spot to sit and rest for a few moments. As well as a shady arbor and a bed of irises, you'll find a stone monument here with an inscription of a haiku by Edo-era poet Basho. Not inappropriately, it reads: The sound of a frog, jumping into an old pond. Returning to the pond you'll come to the Ryotei, an atmospheric restaurant designed after a traditional teahouse; you'll need a reservation if you want to eat there, but'it`s as much a part of the scenery as a place to eat. Part of the beauty of the garden is how the man-made features complement the water and greenery; seen from across the pond, the Ryotei seems to be floating on the pond's surface.

Continuing around the pond you'll come to another path of stepping-stones and a low stone bridge, and a striking stone object which looks like a lantern designed by a modern sculptor. You'll also get a close-up view of Matsushima, an island with a similar object at one end and a tall stone pagoda at the other.

Then you're back at the entrance,wondering where the time has gone. You may be ready to re-emerge refreshed into the big city, or maybe ready to stay a while longer and enjoy another unhurried stroll around Kiyosumi Tei-en. 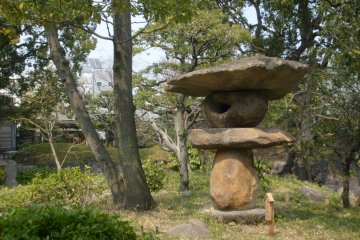 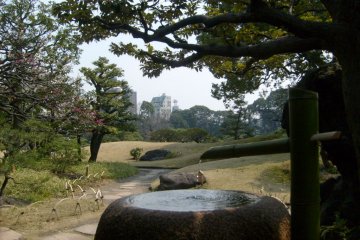 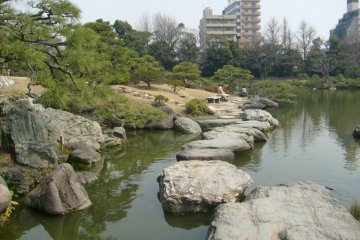 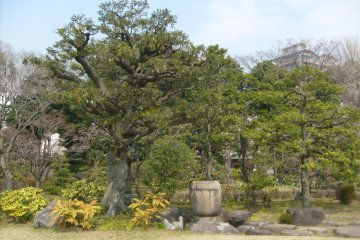 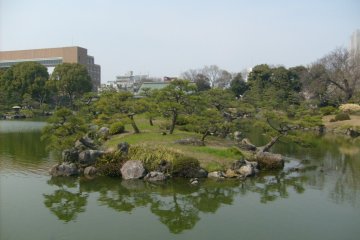 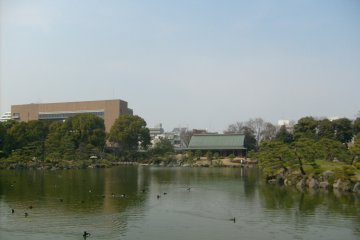 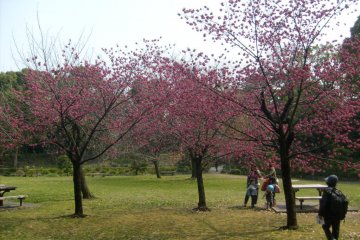 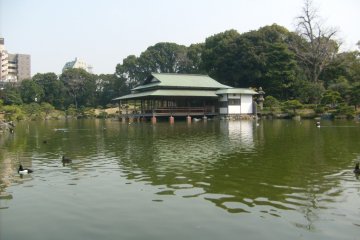 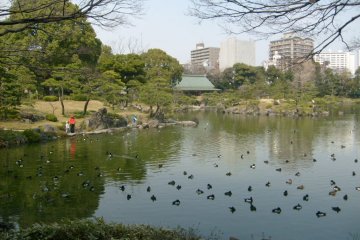 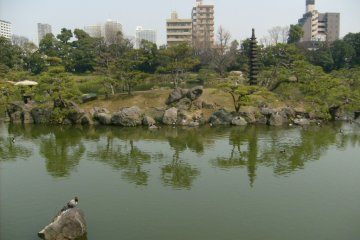