While Meijiza is Tokyo’s oldest theater, having first greeted the world as Kishoza over 140 years ago, it has always stayed relevant to its audience through constant innovation.

Today, a new digital stage curtain, designed by TeamLab, is Meijiza's latest move to keep up with the times.

A history of tenacity

Since first opening in 1873, the theater has experienced many challenges such as burning down multiple times due to circumstances like the Great Kanto Earthquake and the World War || bombings. However, its spirit has always persevered with its history of adopting new names also reflecting its willingness to adapt. Originally known as Kishoza, two more name changes—Hisamatsuza and Chitoseza—paved the way before its current Meijiza brand was adopted in 1893.

Keeping up with the times

Meijiza has always put on a variety of shows for its audiences, from Japanese period or modern dramas to more traditional Kabuki, or Western plays and Enka folk song performances. It was noted as the first theatre in Japan to originally perform Shakespeare's works.

In recent times, to connect better with younger and more international audiences, it launched an evening performance, Sakura - Japan in the Box -, blending contemporary Japanese culture and arts. This hybrid coming-of-age play centered around a figuratively lost high school girl who journeys through a mysterious land with a mythical white fox. Blending the old and new arts from traditional Japanese dance and instrumentals to digitalized stage effects with anime and video game influences, Sakura is a hybrid play that adds depth to Meijiza’s usual shows through the liberal yet apt use of technology.

When you witness the intricacy and beauty of Meijiza’s new innovative digital stage curtain, Four Seasons Kishoza, you will see why the mere curtain alone warrants a visit to the theater. The ever-morphing, animated canvas was created by TeamLab to enhance the theatre's unique stage curtain, while remaining true to Meijiza’s traditions.

The curtain, spanning 7 meters by 20 meters, depicts a living, breathing scene around Nihonbashi during the early Meiji Era. From day to night and throughout the year, the curtain reflects the variations in time and season accordingly. As such, viewing the curtain is always a refreshing experience. Looking closely, you will observe villagers dressed in traditional Japanese garb going about their day from dawn to dusk.

And as day changes to night and seasons pass, the characters’ clothing and activities and scenery will likewise evolve.

The curtain is so intricate that as the weather at Nihonbashi shifts, changes are depicted real-time on the artwork. If it rains at Nihonbashi, it rains on screen. Visiting the theater in mid-April, you will see cherry blossom trees with a hint of green appearing through the clouds of pink as the sakura season draws to an end.

On Meijiza’s new stage curtain lies a wealth of art that is constantly fresh, exciting and insightful as it offers a glimpse into Japan’s past, as depicted through a continually changing scene.

Coupled with its medium of digital technology, Four Seasons Kishoza reflects the theater’s signature style of welding tradition with innovation.

Note: The Four Seasons Kishoza display can only be viewed by Meijiza theater ticket holders.

As a general rule, the stage curtain can only be viewed by Meijiza ticket holders starting from when the doors open up until 10 minutes before specified performances. The theater's performance schedule can be confirmed via the official Meijiza website. Please note that there may be changes or cancellations without prior notice due to unforeseen circumstances.

One minute walk from Hamacho station, on the Toei Shinjuku line. 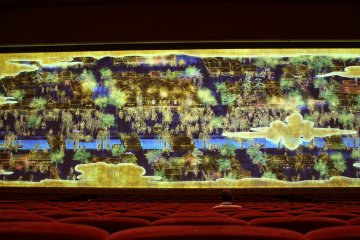 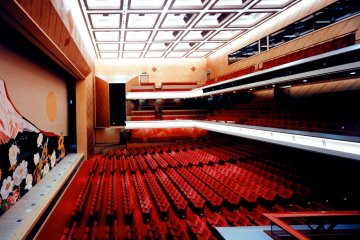 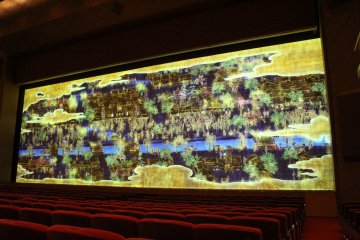 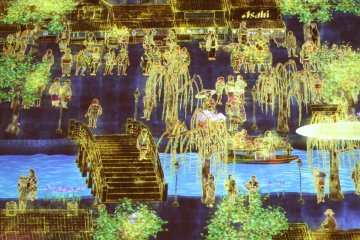