Japan is teeming with life so it's only natural that it has one of the most well-developed public transportation systems in the world. It's no small feat to be transported at breakneck speed and with pinpoint punctuality to different places, but with an unrelenting thirst for innovation, the inventors in Japan make it possible.

While a lot of passengers turn to the shinkansen to go where they need to be, there are people who prefer a more solitary mode of transportation, like bicycles. Bike-sharing services in Japan allow you to move from point A to point B without having to fight for a spot in congested spaces. But cycling isn't everyone's cup of tea, thus manufacturers are offering an alternative in the form of mopeds.

Mopeds are generally described as low-power motorized bicycles that are lightweight. Shaero is a new electric moped sharing service that provides a cheap and easy way to navigate the streets of Tokyo. On one of these two-wheel carriers, 2.5-kilometer travel from Shibuya to Roppongi only takes around ten minutes, making it significantly faster than riding a bike or using the train. Though it might seem awkward-looking at first glance, it's actually pretty convenient to ride because Shaero's mopeds are electric so there's no need to pedal or refuel. Plus, it's good to know that by choosing mopeds, we help nature because they're more eco-friendly than cars.

Another of its awesome perks is that Shaero mopeds are foldable! Parking fees can make a dent in your wallet so knowing you can just tuck your moped in some sequestered area is a relief.

All you have to do to rent a Shaero moped is download the app (available on iOS and Android) and create an account. You must have a moped license and wear one of the helmets offered at the stations because these are considered motorcycles despite how compact they appear.

You may use the Shaero app to find the nearest Shaero station and rent a moped for 15 minutes (200 yen), 24 hours (2,000 yen), or 30 days (20,000 yen). Don't worry if you go over your allotted time. The app will adjust the pricing plan to the most cost-effective choice as you ride. Once you've finished riding the moped, simply drop it off at the nearest Shaero station and attach the charging cord.

There are currently ten rental stations in Tokyo, including Akihabara, Takadanobaba, and Roppongi, but Shaero intends to expand by next summer—their goal is to produce 200 units.

Don’t miss out on this piece of modern Japanese culture. Go rent yourself a Shaero moped! 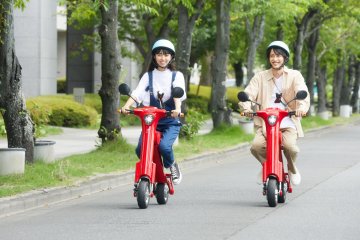 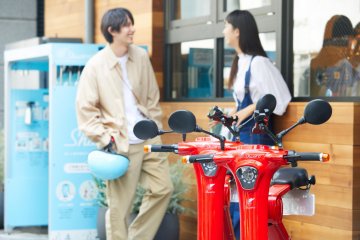 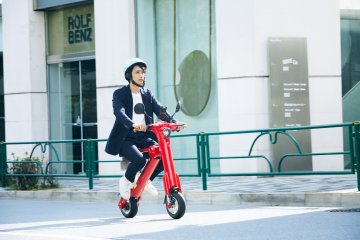