The house of the most famous Japanese ghost story

Yotsuya Kaidan is probably the most famous Japanese ghost story. Originally staged as a kabuki play in 1825, it has been adapted into film, theatre and television dozens of times. It’s still so influential in Japanese society that film and stage crews adapting the story must visit the temple of Oiwa, the ghost, to pay their respect and prevent any curse. You can visit this place as well, no need to be afraid.

Oiwa-Inari Tamiya shrine is located at the Shinjuku district in Tokyo, deep inside a neighbourhood of small alleys surrounded by old houses. This place was once home of Oiwa and Tamiya Iemon, protagonists of the famous horror story.

In summary, the tale is one of betrayal, murder, and revenge. Oiwa’s husband Iemon fell in love with another woman, Oume. Wanting to marry her, the only way to do so was by killing Oiwa. After unsuccessfully poisoning her, he pushed her off a cliff. Days later and after finally marrying Oume, the murderer started seeing and hearing her ex-wife everywhere. One day, Oiwa’s face replaced the one of her new wife. He used his sword against her, he then realised he had just killed Oume. Not being able to stop Oiwa following him, he decided to run for the cliffs. He stopped at the edge, just before Oiwa pushed him and jumped after him.

After these events, the Tamiya family continued to have many strange and tragic accidents. They believed it was the result of Oiwa’s curse.To quiet this, they decided to build the shrine.

Opposite to what you might expect, there is nothing really scary about this place. It is actually a very quiet, small and beautiful local shrine. The charming details in every corner make it a curious place to spend time exploring. It’s interesting to sit down on one of the wooden chairs and observe people walk in and make their offerings. Although it’s not possible to access, inside the main building there is a statue of Oiwa. It is said to have the power to grant wishes of her worshippers.

If you want to ask her for any wish, make sure you write it down on an ema, a wooden wishing plaque. You can buy one with a beautiful drawing of Oiwa directly at the shrine. Write your wish on the back and hang it where all the other ones are. Maybe the horror story protagonist of many plays and movies (including the one of The Ring - a clear homage to her) will prove not to be as evil as she seems to be. 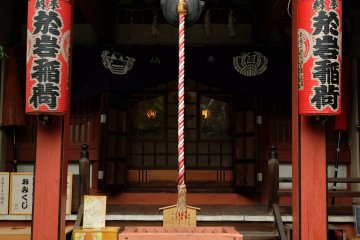 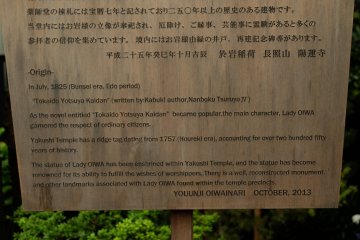 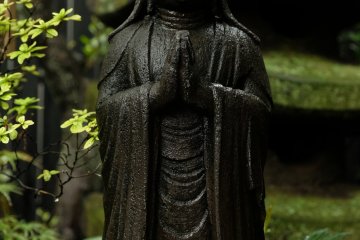 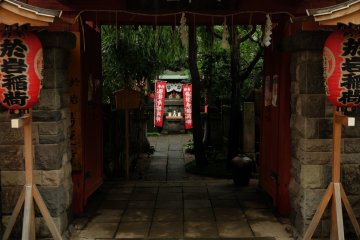 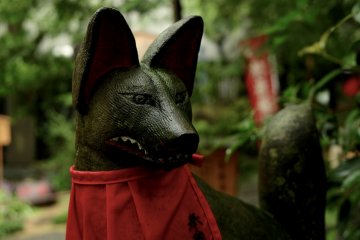 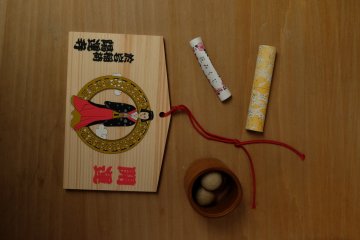 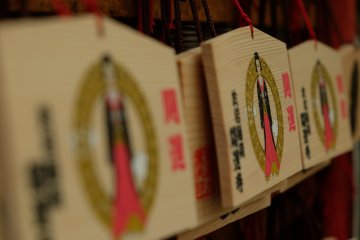