One of Tokyo's largest Shinto shrines

Suginami City may seem sleepy in comparison to other areas of the capital but it also happens to be home to Omiya Hachimangu, the third largest Shinto shrine among Tokyo's 23 city wards. Said to have been founded by the 11th century feudal lord, Yoriyoshi Minamoto, the shrine is now known for its belief in protecting women in childbirth and the raising of their children.

Like many large shrines, Omiya Hachimangu's grounds are quite expansive. The two torii gates lead to a main hall complex consisting of three structures - a prayer hall, a building where the shrine's deities are enshrined and a connecting building - as well as a kaguraden. During festivals, the latter is where traditional music and dances are staged.

To the left of the main building lies a storage facility that houses the shrine's mikoshi portable shrines. Omiya Hachimangu features 32 of these shrines and all of them are available for viewing. In mid-September, these shrines leave the building to be paraded during the Omiya Hachiman Matsuri.

The grounds of the shrine are also home to traditional martial arts displays. The Wakaba Matsuri is held in early March and features martial arts demonstrations in honour of the shrine's deities. Even earlier in the year at the beginning of January is the Hikime-no-gi and Omata-shiki, traditional archery rituals, the first to purge evil spirits with whistling arrows and the second to 'pacify' the country by demonstrating the power of the bow.

Along with its main buildings, entrance gates and festival traditions, a visitor to Omiya Hachimangu Shrine will also come across a picturesque torii gate tunnel, a number of smaller shrine structures, komainu stone guardians as well as the sense of peace and quiet that Shinto shrines in Japan are known for.

Take the Keio Inokashira Line to Nishi-eifuku Station. The shrine is a 7-minute walk north-east from the North Exit. 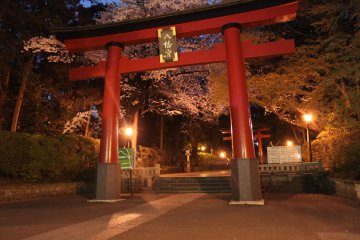 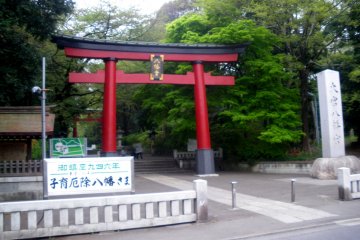