Renting a Kimono in Asakusa

On an early Spring Sunday, after a visit to Tokyo Skytree with a friend, the afternoon was still a bit young so we decided to visit nearby Asakusa.

It wasn’t my first time in the touristy-but-charming part of Tokyo, but it had been a few years since I’d last been there. One thing that caught my eye in the Nakamise Mosh Pit, which I didn’t notice before, was a few people walking amongst the tourists, vendors, and the like… they were wearing kimonos.

I didn’t notice kimonos years ago, before. Perhaps it was the bright colors set against the mostly dark colored pants and jackets in the background, or was it an inner cry to experience more “Japan” while I’m in Japan? The (mostly) ladies and gentlemen in their traditional wear certainly caught my eye, and perhaps more: I had seen so many of my friends and co-workers displaying themselves and their significant others, families, etc, wearing the traditional wear. I had never worn a kimono before, and never gotten curious about them until that moment.

My friend noticed my curiosity. “Oh, there are places where you can rent kimono here”, she said to me with a grin. She was more in the know as she’s a true Tokyo-ite while I’m only a temp who has been in Japan for just a few years. I smiled to her, and said “They look really cool.” My mind, though, made a note; “look into it, man”. We continued to walk that day through Asakusa and enjoyed the rest of the day of course, but in the days and weeks that followed, I would find out more on my own. I was fascinated by the thought.

Looking online, I saw that there were several shops in Asakusa that rent kimonos (duh, I know, that’s what she said) and thankfully for me, they were in English and also accepted reservations online. One shop, called Kyoto Kimono, seemed pretty conveniently located, and much cheaper than she thought it would be.

A short walk from the Tsukuba Express Asakusa station, we arrived at the shop. Kyoto Kimono had our reservation info ready when we arrived. We were separated for a bit, as I was directed to choose a male kimono while the staff showed her what she had to choose from. I picked out a purple kimono for myself, with a grey “haori” to complement the look. One I choose my outfit, the ladies of the staff directed me to a room where one of them would dress me up. Cool, I thought, though I wondered if Japanese males of yesteryear were dressed in a similar routine.

Once it was done, though, looking at myself in the mirror I looked like a different person. “You look very nice,” the staff member told me with a smile, “almost like a Japanese.” Though I don’t think it made me look local, the reflection in the mirror did tell me that I did look nice, though I think the kimono had more to do with it than anything I provided. Anyway, my part of the dress-up was done, and, as I was to discover, hers was still a step away.

Stepping out from the dressing area and seeing her in a kimono was like looking at a different person as well. She looked more refined, like a “textbook” Japanese lady, in her flowery-designed kimono. We took a quick selfie before she was taken to an extra step that was unofficially required for the ladies: the hair styling. The process didn’t take too long for her, but the result of it was she looked like a completely different person now. The hair styling, which by no means am I an expert of, complemented the rest of her look perfectly. A few studio photo shots later, and we were on our way out to old Asakusa town in our new, old, looks.

It felt nice, sublime even. To walk around in modern Japan while wearing traditional clothing against the backdrop of Asakusa, Sensoji-temple, Nakamise Street… it felt even more perfect than pajamas at home. Except that at home we typically don’t have paparazzi taking photos of us… but that was cool as well, it felt good that other appreciated our look as well, enough to take pictures of. Of course, there were others dressed similarly to us, and we would kind of smile and nod at them as we would pass by each other. We were all in this fun experience together.

It was a great experience and one I'd highly recommend to anyone, tourist or even local, to give a try. It may seem cheesy, but the Asakusa experience and the photos from this are far more awesome than anything you can do in a photo studio. 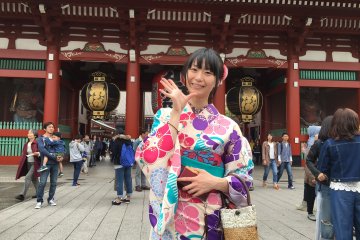 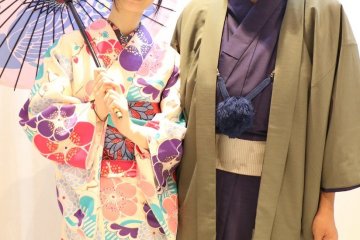 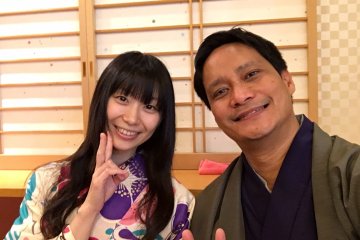 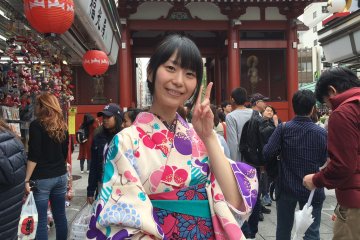