Experience becoming a samurai for a day

Long gone are the days when samurai defended their lords and fought under the way of the samurai, known as “bushido”. The times of the armored samurai came to an end during the Meiji restoration, when the new government abolished the warrior caste, and forbid the use of katana. We’ve seen their armor and katana in museums. We’ve seen their stories in movies. Now there’s a chance to become a samurai, at least for a day, at the Samurai Armor Photo Studio in Shibuya. I tried the experience and couldn’t get enough of the photo shooting and learning all my brain could retain about the samurai and the dressing process of the armor.

Welcomed by the owner Takemura-san and the cameraman Okamoto-san, they made a short introduction of the session and history of the samurai armor. The payment had been made in advance, so there went my ¥13000 reserved for that moment. Then, he described all the armor and the various samurai they would have belonged to in the past. The selection of armor included a larger suit of armor, for those people that are above average size. The armor had been also used in several TV shows and movies in Japan, like Taiga drama, and even the ones that Tom Cruise and Ken Watanabe used in the movie The Last Samurai. It was hard to decide on just one of the suits of armor, but I finally made up my mind and chose the all black armor, worn by Date Masamune.

During the dressing process, Takemura-san explained every piece of clothing and armor, and their use and purpose. Trying to repeat every term he said wasn’t enough to help me remember everything through the dressing process, and I’m sure I will need his guidance again. One of the facts carved in my brain was that it was necessary for a samurai to have assistance to get dressed by a trustworthy disciple, as they couldn’t do the whole process on their own. The last piece of armor, the chest, weighs around 20kg. The real armor used by samurai weighed over 40kg. The new lighter models are for the actors performing whilst wearing the samurai armor.

Walking fully armored wasn’t easy, and I had to be careful to not scratch any armor detail or bump into any valuable piece of the studio. The armor are really not toys and had to be taken seriously. The undressing process after the photo session took barely a minute, though. The photo session was the moment to get into the role of being a samurai. I participated in photo sessions before, but this one was the funniest and most relaxed. I couldn’t help but laugh most of the time about the comments from Takemura-san and Okamoto-san. They both made the session really enjoyable, cracking jokes with them and still getting more information of the armor I was wearing.

Once the photo session was over, and I was waiting for the photos to be transferred to an SD card to take home with me, I could ask Takemura-san some questions regarding the weapons and more details of the lives and history of the samurai. The entire experience was a lesson and memento I took home with me.

Freelance travel journalist and travel consultant. After stepping first time in Japan more than five years ago, I visited the country several times and even became a Tokyoite for two years. My experience in tourism communication and travel fields has led me to numerous adventures around the World... 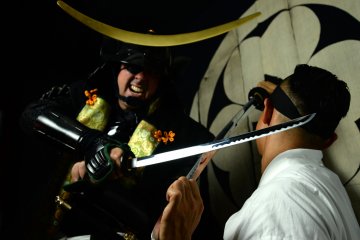 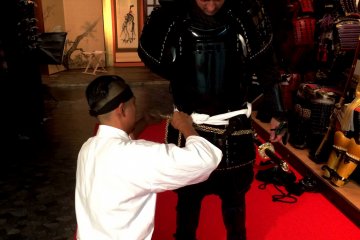 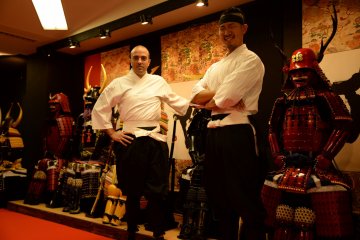 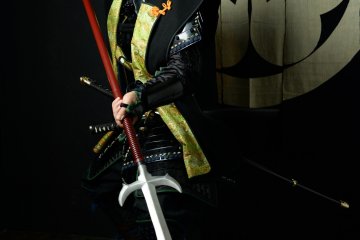