A bowl of soup is great comfort food, and some kinds of soup - chicken soup, borscht and tomato soup - are not only soothing but touted as remedies for all kinds of ailments. Soup Plus, a tiny shop just off Omotesando, goes a little further with its healing foods. At Soup Plus, you get a hot bowl of delicious soup with kanpo, traditional Japanese medicine, for whatever has got you under the weather.

Japanese people have relied on a Chinese-derived medical philosophy, called kanpo, for over 1000 years. In the 7th century, scholars and monks brought Chinese medical texts along with legal and social traditions. Over the centuries, the Japanese version of the medical system became a philosophy of health in its own right. While Chinese medicine used animal ingredients, Japanese kanpo came to rely on plants for treatment. Today, kanpo is regulated by the Japanese government, and the ingredients are rigorously tested and regulated. Doctors frequently prescribe kanpo and pharmacies stock these medicines next to western drugs.

The increasing interest in vegetarian, vegan and natural foods in Japan has revived interest in yakuzen, or medicinal cuisine, a part of kanpo. Although many Japanese trust kanpo to maintain their health, the smell and taste of kanpo preparations can be unpleasant. Trendy yakuzen cuisine is designed to deliver your dose in a delicious and comforting meal.

This is where yakuzen cuisine at Soup Plus comes in. They serve hearty soups with herbs that are believed to be beneficial for well-being.

Soup Plus offers diners a choice of soups and sides of rice supplemented by kanpo formulations. Diners who have experienced a visit to a medical clinic in Japan may be surprised when they place an order. The servers hand you an English or Japanese form on a clipboard. After indicating your order of soup, rice, and toppings, scan the list for what ails you - fatigue, chills, or stress, among many others. The servers will add to your order a powder containing the herbs that are supposed to heal you of your malady.

I had sanratan, or hot sand sour soup, with a formulation to relieve stress, and a small but generous portion of rice. It was deliciously savory and tart, slightly spicy, and the kanpo added some complex but not unpleasant flavors.

Soup Plus seats only about seven people. Delivery and take out are available. All dishes are gluten-free. 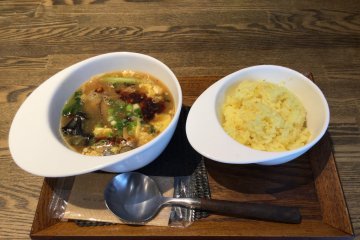 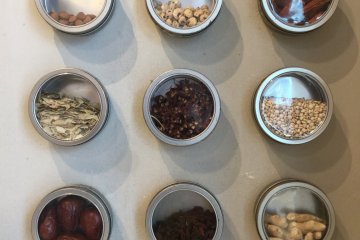 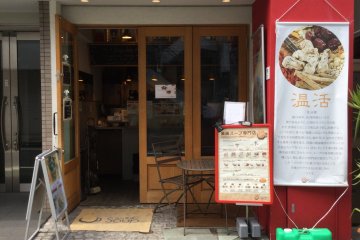 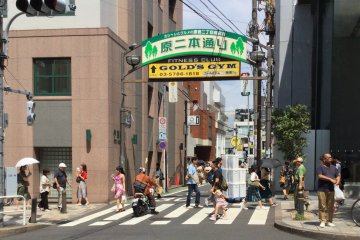