Experiencing a sumo-wrestling match up close

Sumo wrestling is a sport unique in Japan, and watching a sumo tournament itself is a grand affair. However, it is hard to truly comprehend just how much time sumo wrestlers invest in perfecting their technique, form, strength and even their diets to get to optimum sumo-wrestling condition - one can only get a glimpse of it through watching a sumo training session.

Arriving at the sumo training stable, visitors take off their shoes at the entrance and proceed to walk to a large room, where a sumo wrestling ring is located, and a tatami viewing gallery for guests to view quietly. A few rules as a spectator includes not showing your bare feet towards the sumo wrestlers, not using any flash photography, and to stay throughout the entire session of the training, just to name a few.

Bearing these in mind, attention is focused on the sumo wrestlers the minute guests sit themselves down. Hair tied up in a bun and sweating bullets from the heater's blaze and from the heat of training, the intense concentration in the wrestlers' eyes is evident in their facial expressions. These gentlemen may appear stocky, but they pack the strength of two to three grown men in their nearly 1.8-metre frame.

The training goes under way - Each wrestler squats into their ready stance, with hands over their knees, shoulders arched forward. As with regular sumo tournaments, the goal here is to either topple your opponent or push them past the ring, otherwise known as Dohyō in Japanese, by executing only certain kinds of pushes. A spectator would be inclined to think that a sumo's frame and strength would be determiners of any given round, but it's much more than that. Factors such as technique and strength of their glutes are equally important. Besides these, there are also a few uncommon ways to determine the winner of each round, such as a sumo's belt coming undone, or using an illegal technique (e.g. pushing an opponent by his neck, which we witnessed in this particular session).

Some interesting things that an audience should take notice of during a training session are that for those who have been to a sumo tournament and wondered what the white powder that sumos throw before beginning a bout - that's salt, and that stems from the belief, in Japanese culture, for salt to have purification powers. Another interesting note is that the sumos drink water from a tank, using the ladle that's found in front of Shinto temples in Japan, which makes perfect sense since Sumo is a sport borne from Shinto.

The end of the training session arrives, and the sumos begin their cooldown exercises - they do slow diamond push-ups (again, a testament to their strength despite their large frame), stretching, and a lot of deep breathing. The session ends when all the sumos involved gather along the circumference of the dohyo and begin a ritualistic exercise with their sumo trainer before concluding. At this point, the sumos are more than happy to have their pictures taken with each spectator, but the audience are advised to do so in a respectful and poised manner. 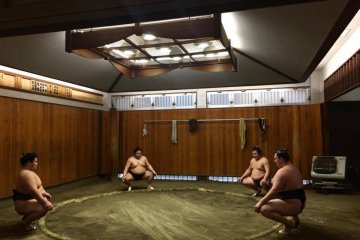 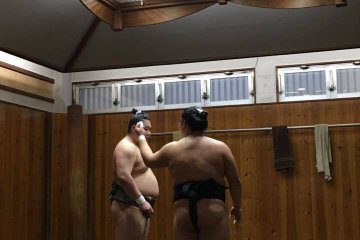 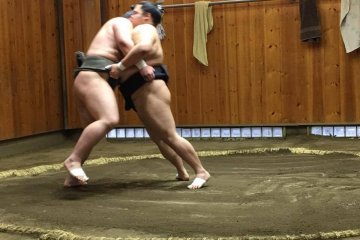 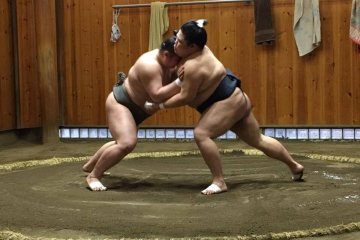 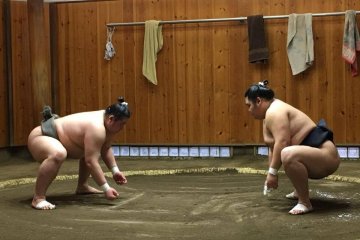 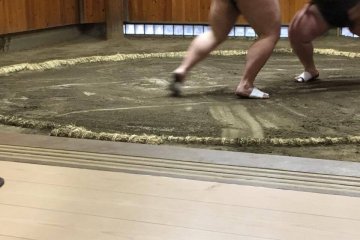 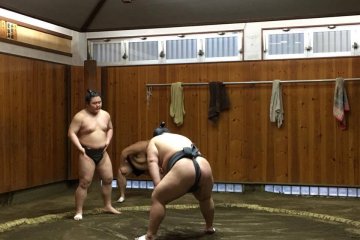