The bells of time and concubines

You'd think a lot more would be made out of the city's own Bell of Time. But as befits the home to the world’s busiest train station, Japan's most famous red light district, and the administrative centre to one of the world’s most extraordinary capital cities, perhaps Shinjuku can be excused for being a tad distracted.

Tenryuji Temple is a burst of Edo Period history. Like its cousin in Ueno, Tenryuji Temple's Bell of Time - known as toki no kane in Japanese - was used to keep time for the citizens of old Edo. The bell also served as a reminder for the customers of the nearby 'pleasure quarters' to leave the premises...

Established at the end of the 16th century, the temple is closely associated with the Tokugawa Shogunate and was connected with the family temple of the father of Lady Saigo, Tokugawa Ieyasu's trusted concubine. Perhaps because of such political connections, a number of the temple's older features are still extant. The Bell of Time, now a Cultural Property of the city, of course still stands as does the romon-styled temple gate. Both structures are easily recognised by their distinctive designs, completely at odds with the modern buildings around them.

A cemetery can be found here and if you can, take note of the surrealistically aged tombstone markings and the standing Jizo statues. The main hall of the temple, though a modern concrete-reinforced structure, is robustly handsome with crisp, clean designs. Just outside of the temple at its base stands a statue of Kannon, the Buddhist Goddess of Mercy.

An interesting history, Tenryuji Temple and its survivors from the days of old Edo offer a welcome distraction from the towers and modernity of today's Shinjuku. 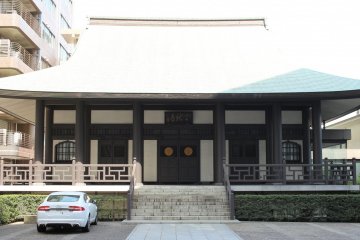 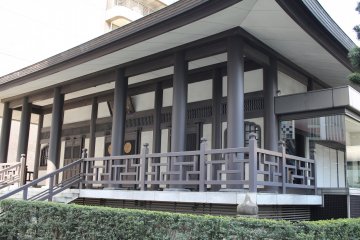 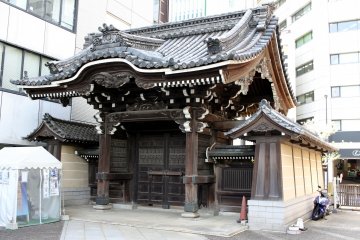 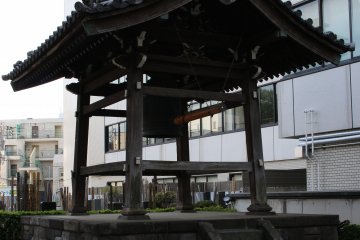