Every race has a flair of its own, with a unique atmosphere and set of challenges. This article is aimed to be a guide specifically for those who will run in the Tokyo Marathon, to outline the course and the overall experience. The information here is based on my experience running the full course in the 2010 and 2014 events, and having attended as a spectator for several years as well. (If you have friends or family coming to watch you, be sure to steer them to this article's companion piece: Tokyo Marathon - Spectators' Guide)

The Tokyo Marathon is one of the six World Marathon Majors, along with the races in Berlin, London, Boston, Chicago, and New York City. It has a full (42.195 km)marathon and 10 km race mixed in as well. Additionally, the wheelchair event begins slightly before the others.

The race is held on a Sunday in late February. This means it can be quite cold. Average low and high February temperatures in Tokyo are 2°C (35°F) - 9°C (49°F). Though it is this time of year is not a rainy season at all, there has been a tradition of bad weather on the day of the marathon. The 2011 race was the first time in the event's history that it didn't rain. There can also be high winds, especially towards the end when the course goes over the rivers near the ocean. I found myself wishing I had gloves for the first 1/3 of the race when I ran, but during the second half of the race, the sun came out and things became quite comfortable weather-wise.

One of the most difficult aspects of this marathon is simply being allowed to participate. It is enormously popular: 303,450 people applied to run in the 2013 full race. Therefore, a lottery-type drawing is held to select the invited runners from the huge pool of applicants. Applications are usually due in August, and an be completed on the Tokyo Marathon's website. Results of the lottery are announced in October.

Check-in for the race has been held at the Tokyo Big Sight convention center, in Odaiba (which is also the full marathon's finish line). Check-in and the Tokyo Marathon Expo are held for several days in advance of the race, and runners must go there to get their bib,T-shirt, and a collection of goodies and information. The Expo features many vendors selling and showcasing their running products, and is a good time to spend an hour or so.

The race itself starts from the Tokyo Metropolitan Government Building, just a few minutes' walk from the West Exit of Shinjuku Station. While Shinjuku is the bustling commercial heart of Tokyo, and there is an early-morning start time, Shinjuku is not necessarily recommended as a place for out-of-town runners to search for a hotel. Shinjuku hotels will be quite a bit more expensive, and Tokyo's fantastic train system makes it easy to get to Shinjuku from just about anywhere. However, it is advised that first-timers check out the massive Shinjuku Station building before raceday, as getting lost there is very easy for the uninitiated.

Runners are recommended to arrive at Shinjuku Station dressed and ready to go. At the starting line, there are precious few toilet facilities available for the huge number of people, and the line for the restrooms in Shinjuku Station stretch several hours long. If you want a place to change, try the restroom of another train station en route to Shinjuku.

Get to the starting line early! The enormous crowd results in chaos and slow moving. The first stop is the trucks that collect your "personal belongings bag," which runners get at the Expo. The big is the size of a small trash bag, and is good to hold your clothes and things you'll need at the finish line. Find the truck number that corresponds to your bib number, and hand your belongings over. Then, you need to find your starting position. This is easier said than done. Runners are organized into starting groups according to the letter on your bib, but to get from the entrance to your group's area involves navigating a frantic mob of nervous and pushy people. Again - get to the starting line early! Just getting from Point A to Point B to Point C takes a lot of time.

The course itself can be seen on the map. It is slightly downhill for the first few kilometers, and then evens out to be very, very flat the rest of the way. Between the 35- and 40-kilometer points, there are several bridges across rivers. Some of the bridges have slight inclines leading up and down either side of them. While not steep, they are inconveniently placed towards the end of the race, and I've seen many runners stopped just before the inclines, trying to gather the strength to make it up (of course, there have tended to be lots of people stopped towards the end of the race in general, especially in the later time groups). Overall, the course is quite fast.

Toilets are in pretty fair supply during the course. In addition to the portable-style ones the marathon provides at odd intervals, the convenience stores along the route open their doors to runners to use their facilities as well. However, beware the restroom lines for the very first few kilometers of the race. Due to the afore-mentioned lack of toilets at the starting line, there were some very, very long lines for the first few sets of toilets once the race got going. A little further up the course, the lines were much shorter.

In terms of service, the Tokyo Marathon is very well organized. All the volunteers and all the aid stations are color-coded: blue for water stations (every 3 km), orange for sports drink stations (every 6 km). The sports drink was a Japanese product called "Amino Value." International runners who are used to nice, multi-flavored sports drinks may be in for a rude awakening. Nearly all sports drink companies in Japan make a single, similarly-flavored clear product, and the taste is a bit strong and...well, not what you may be used to. Even Western sports drink companies who are trying to crack the Japanese market (like Gatorade) have started producing this same flavor. You can find Amino Value (and many other companies' drinks) in vending machines across Japan, so try it beforehand to get used to it a bit. There are also different colors for first-aid stops, and food stations (which only start appearing in the second half of the course). Food stations have an interesting variety of choices. Many had pre-peeled bananas. One drawback when I ran was that food stands had signs that were in Japanese-only, and when what appeared to be a dinner roll of some sort turned out to be filled with some kind of chocolate cream, it was a rude shock to the unsuspecting system (it wasn't bad, but when your brain is getting mushy, surprises like that can be jarring).

There is plenty of entertainment and sight-seeing for runners throughout the course. Just before the 10 km point, you go through Hibiya Park and past the Imperial Palace. The halfway point goes through Ginza and Yurakucho, which are modern, commercial areas with plenty to look at. A big entertainment hub is at Asakusa, at the 2nd hairpin turn-around point. There is a stage there with performers doing traditional music and dancing in front of the ancient shrine there. And the ending is in scenic Odaiba, with its nice seaside views and modern architecture. Throughout, there are stages set up, cheerleaders and marching bands and rock bands performing in random spots, and so on. With one big exception. From the 2nd turnaround (about 27 km point) until the left-turn away from the double-back part of the course, the best way I can describe it is "the dead zone." There is nothing here. No sights, no performances, and no fans. It seems that everyone who gathers at Asakusa to see the runners there head promptly towards the finish, creating a huge vacuum of nothingness right when many runners hit the proverbial wall and could use a bit of encouragement. Be prepared. Overall, the experience is a great one. The fans here are excellent and knowledgeable, and create a fun atmosphere that is missing at many other races around the world. The staff is extremely enthusiastic and friendly.

At the finish line is the medals and medical support as appropriate. Volunteers remove the timing chip from your shoes so that you don't have to bend down to do it (a nice touch). Unfortunately, there's a bit of a walk (limp? Stagger? Crawl?) to get to where you need to go, which is the gathering area inside Tokyo Big Sight. There are plenty of freebies here, though, from snacks (I remember fruit and energy bars) to bottles of water, to some spray to put on your aching knees. In the building, you'll be able to claim your personal belongings bag, and then the men and women are separated into huge, empty rooms to change. You're sitting (lying?) on the floor here, and there are no private rooms or showers, but this is where you get yourself together and into some fresh clothes, before you head out to the meeting area to be greeted by your supporters.

If you have a cell phone, it's recommended that you put it in your personal belongings bag. The "family meeting area" is quite big and not very well marked, and there were plenty of exhausted runners roaming around, unable to find their friends. Also, before you leave, be sure to head downstairs where you can pose for photos in front of the sponsors board.

Good luck, everyone! If you have any questions, please post them in the "Join the Discussion" section at the bottom of the article. 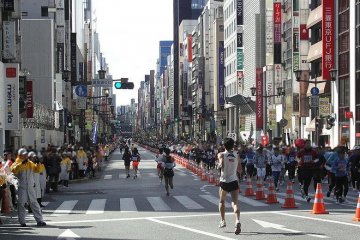 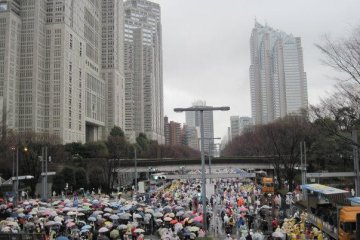 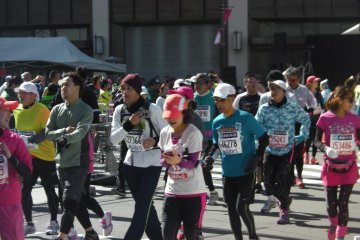 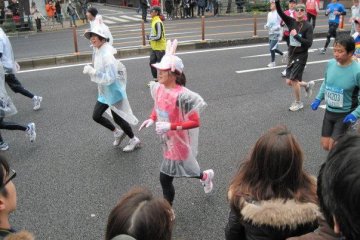 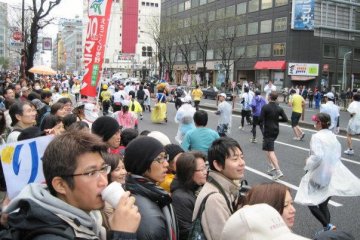 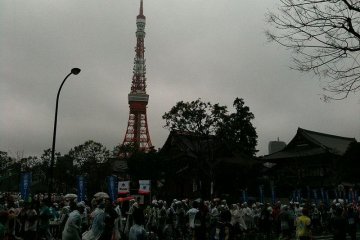 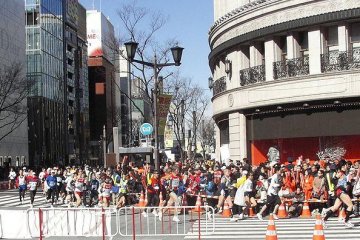 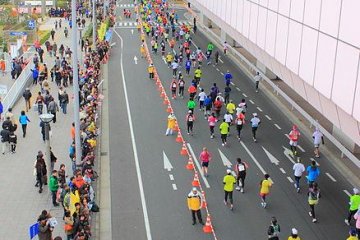 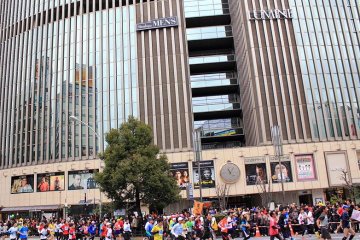 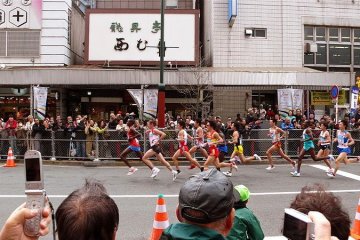 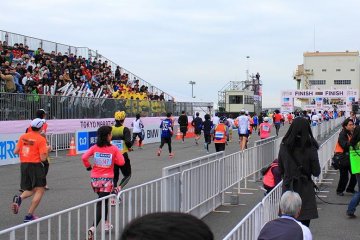 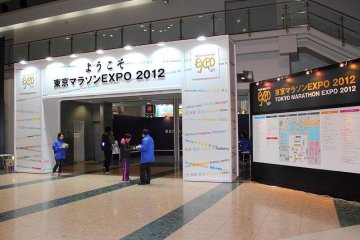 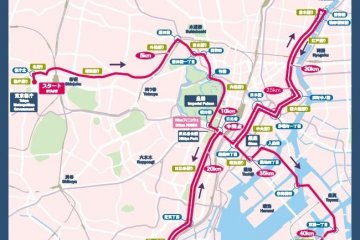