The best tsukemen in town

I used to teach English at a language school in Iidabashi. I would pass this noodle shop that almost always had a long line outside it around lunch or dinner time. It was a nondescript place from the outside. I would see men with towels tied around their heads preparing bowls of noodles amid steam rising from what I assume are vats of boiling water or stock. The customers sat on stools around the counter. One day, I finished my class at four in the afternoon and when I went passed the noodle shop, there were a lot of empty seats and no line outside so I decided to find out what the fuss is all about.

This noodle shop’s bestseller is tsukemen (“dipping noodles”), which I have never had before. It took about ten, maybe fifteen, minutes before they served me with a big bowl of dry noodles topped with a sheet of nori (seaweed) and a half slice of lime on top. Then they served a smaller bowl of thick soup with slices of meat and menma (bamboo shoots) and cautioned me that the bowl was hot. I tried the noodles first. They were satisfyingly thick, thicker than regular ramen, and gratifyingly chewy or as with pasta, al dente. Then I tried the soup. The dense flavor was an amazing combination of pork and dried fish. I took a bit of noodles and dipped it in the soup. At that very moment, I was converted. Never will I crave ramen again the way I will crave again and again for tsukemen. When I was halfway through, I squeezed a bit of lime juice onto the noodles and it gave a citrusy tangy kick to an already savory experience.

Since that fateful day, I have been to Nidaime Tsujita Tsukemen (二代目つじ田 つけ麺) several times, sometimes by myself, often with friends, most of whom have never heard of tsukemen before and were also converted to be as enthusiastic as I am about tsukemen afterwards. I have also tried at least ten other tsukemen restaurants, even the one ranked as the top one in online ratings — I remember going to the supposedly best tsukemen restaurant at 4 p.m. to line up under the hot summer sun (we had to go there early because once the noodle shop runs out of soup, they close for the day). None of them beat Nidaime Tsujita. Sometimes the noodles were unimpressive, or the soup too sweet, too salty, too thick, too thin, too spicy, or too fishy. None of them served their tsukemen with lime. Nidaime Tsujita’s tsukemen is just perfect. These days, I would order the one with an egg that’s hardboiled on the outside but has a lovely dark orange gel of a yolk.

A regular tsukemen at Nidaime Tsujita costs ¥880, and ¥980 with the egg. Aside from Iidabashi, they have branches in Ochanomizu-Kanda, Kojimachi, and Miso-no-syo. 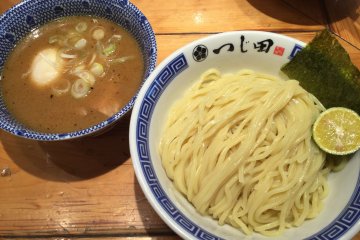 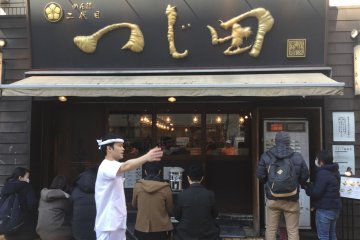 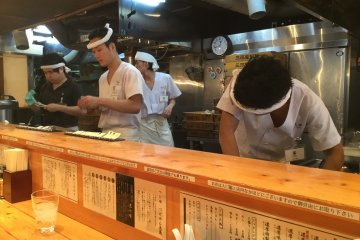 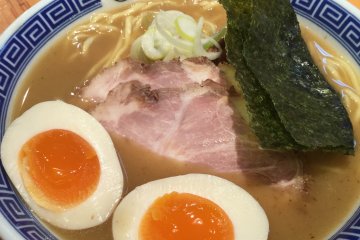