Giant trees in the metropolis

Last spring, my French friends Anita and Jean Francois visited Tokyo. It was their fifth trip to Japan. Each time they come, I would take them somewhere. I had taken them to Blue Note Tokyo, Kamakura, Enoshima, Minato Mirai and China Town in Yokohama, and other places nearby. And each time we visit a place, to amuse ourselves, we would always try to write some haiku.

On their own, my European friends had already been to many different parts of Japan. Thus, on their last visit, I had a hard time thinking where to go and explore. They are not teenagers anymore, so I had to be more creative. An idea crossed my mind.

“How about going to see a giant ginkgo tree in Tokyo?”

“Uhmm. That sounds interesting!” she said.

“I heard it's not taller than the Tokyo Sky Tree but it's definitely much older and fairer.”

“Not far from your hotel,” I said. “It's a two-minute walk from Nippori Station.”

“That's terrific. It's something different.”

“Yeah. And the great thing about this is that - the tree is located in one of the oldest cemeteries in Tokyo.”

“Not at all. We love visiting graveyards.”

So, one drizzling morning in late April, we walked from JR Nippori Station to Yanaka Bochi (谷中墓地 Yanaka Graveyard). It was like taking a short walk from your backyard and end at a park where you come to a path lined with cherry trees. Except that here, the main path had been transformed into a road where taxis and other vehicles pass through every day just like on any other streets. Yes, in the middle of an ancient cemetery vehicular roads had asserted themselves. Therefore, now the solemnity of the sanctuary is often punctuated by taxis in a hurry and by utility vehicles.

The cherry blossoms had just been blown away by the wind. Instead, young leaves were quickly coming to life.

My old friends and I started to search for big trees. We walked around little paths apologizing to the spirits of the enshrined shoguns, political leaders, activists, artists, scholars, and others. We were intruding into a world unfamiliar to us.

After a few minutes, I spotted the oichou -- the giant ginkgo biloba tree; it's the biggest tree in the graveyard of seven thousand souls.

“Would you mind,” I broke the silence and asked my furansujin friends, “If I make a short film with you as the actors?”

“Yes,” I said. “You’ll be my Catherine Deneuve today and Jean Francois will be Alain Delon.”

“Don't worry,” I reassured them, “there'll be no kissing scenes.”

I gave them simple directions and they playfully obliged. The filming was done in less than an hour. I wanted to make a film haiku -- a seventeen second film.

After the video shooting, we explored the one hundred thousand square meter graveyard. We walked around the one hundred and forty year old cemetery. We wanted to discover more handsome trees.

Looking at one side of the megalopolis from the perspective of the graves, gave me a strange sensation. The contrast between the ancient and the modern was fascinating. Side by side, the old and the new co-exist in harmony and balance. The skyscrapers in the distant (on a good day the Tokyo Sky Tree is visible from here) and the antique graves and the centuries old trees in the foreground was a powerful juxtaposition that could only be found in Tokyo.

Coming out of the graveyard compound, we spotted a petite curry restaurant located on a crossroad. While waiting for our orders to be served, we compared notes and haiku.

In the heart of Tokyo,

Converse with the living.

So secret the place

Quiet and silent the graves

After enjoying our chicken and beef curries and beer, we continued to wander around the vicinity of Yanaka Cemetery; we found two more astonishing trees. Like hidden treasures, we stumbled upon them on a hidden corner of a temple-graveyard and on a cross-road.

Each time we met a fat tree, my visiting friends and I would always touch or caress its bark. This was our way of saying hello or doing a handshake with a beloved non-human being.

Feeling invigorated and relaxed, we continued walking around the neighborhood. We followed the logic of the road - we went where most people were going. We ended up at Ueno Park. 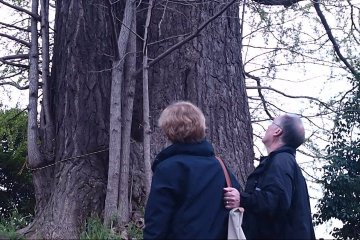 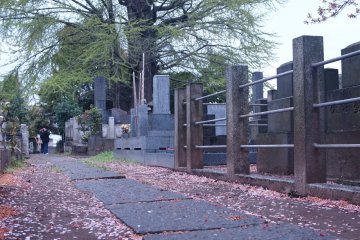 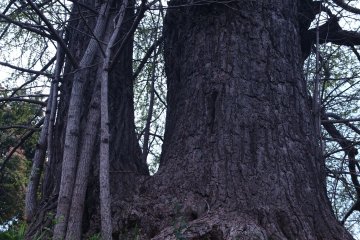 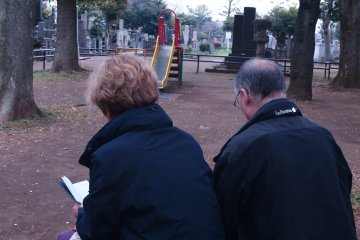 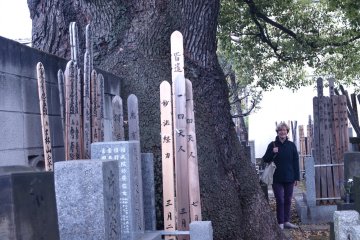 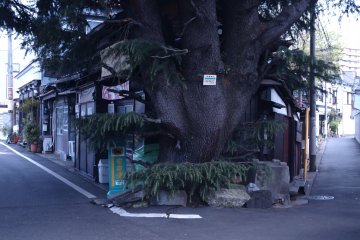