I don’t know what it is about Yonago but it is such a livable city. Maybe it has just the right number of people and the right number of buildings or perhaps it is the location on the Japan Sea. The heart of this livability is Yonago Ekimae. Ekimae means, " the front of the station" in English and this section of Yonago is fabulously quaint yet surprisingly cosmopolitan.

There are several shopping arcades off of the road in front of the station and of course there are all the big hotels and stores that you expect to find in Japan. When you walk away from that area and move a few streets back you see a city that is going through a revival. The shopping arcades have shops that are open for business selling the latest fashion and accessories. Boutiques and cafes are ready for your business.

Yonago is a city of waterways and bridges. Canal houses near the station create a postcard picture as their small bridges form a pattern that is pleasing to the eye. The water reaches the point of almost overflowing onto the paths along the canals in some locations.

The narrow streets of the Ekimae area have clearly been the object of urban renewal. Side streets are freshly covered with asphalt and shopkeepers tend to their storefronts with pride. Some side streets are for pedestrians only and are paved with beige brick. These areas are accented with simple landscaping that creates the feel of an urban garden.

Another element of Yonago Ekimae is the use of open space. Someone realized that urban doesn’t have to mean filled with buildings. There are several open spaces that have benches or seating around parts of their perimeters. One such space is the site of an old train that is on display and relates the importance the train played on the history of the city. My favorite open space is a grass covered lot that has a row of yellow bus terminal chairs begging to be sat on but without any takers.

Yonago Ekimae is the heart of the city and the roads that go through it remind you that you can get anywhere from here. You soon realize that you’d rather stay where you are. 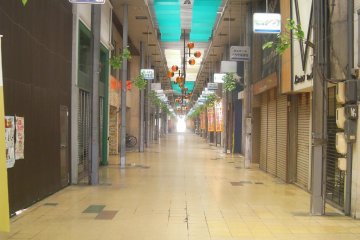 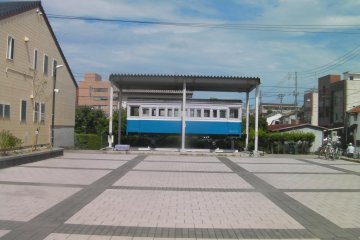 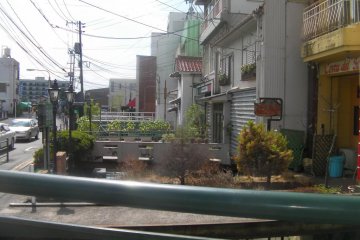 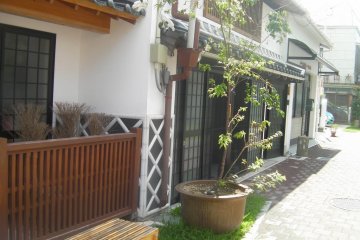