A day on the sacred mountain

Mount Koya (or Koya-san), which is 857 metres above sea level, is the base for the Shingon Buddhists, an esoteric sect of Buddhists. There are over one hundred and twenty temples on the mountain and there’s been a religious community here since 816. A monk named Kukai, who had studied Buddhism in China, founded the Shingon sect on his return to Japan. Legend has it that he threw his vajra (ritual sceptre) from China and it landed here in the mountains in Wakayama. The Imperial Court subsequently granted that Kukai was to build a place of meditation on the mountain. After his death, Kukai became known as Kobo Daishi. The monks to this day still believe Kobo Daishi to be alive, meditating in his tomb for the arrival of Miroku (the Buddha of the future) and they prepare three meals a day for him in Okunoin cemetery.

I get off the bus at Okuninguchi for the Okunoin Cemetery. The cemetery is a sacred area and the pathway runs for two kilometres from here to Kobo Daishi's mausoleum. The path is lined with old, tall cedar trees and the cemetery contains over two hundred thousand gravestones and memorial pagodas. The trees are huge and close together blocking the sunlight. The graves are also packed together tightly, the dark grey stone, wood and black-grey marble give an eerie atmosphere. The ground is covered with snow and the base of the trees and the headstones are covered in moss. It’s not a place for anyone who is claustrophobic. The air is fresh, but the whole place is damp and slightly misty, adding to the enchantment.

There are various signs in English and Japanese describing the legends that abound in the cemetery. This just adds to the ambiance. At the Sugatami-no-Ido (reflection well), legend has it that if a person looks into the well and does not see his reflection then he will die within three years. At the Ksitigsrbha Shrine, the bodhisattva Jizo is the Asekaki Jizo (sweating Jizo). The Buddha is made of black stone and is often moist due to the weather conditions. It is said that the statue is sweating because it bears the sufferings of others for their wrongdoings. At the Zenni Jochi memorial, a visitor can place his ear on the stone and hear the cries in hell. Near the end of the pathway, at the Mizumuke Jizo, the faithful pour water on the statues of the Buddhist deities for the peacefulness of their loved ones. Close to this is the Miroku-ishi, which is a stone that it is said to feel light to virtuous people and heavy to sinful people. I can't tell whether this is true or not, as it’s too heavy for me to lift.

Along the path there are many gorinto (five-tiered stupas). The five tiers represent the five elements, from bottom to top, of earth, water, fire, wind and space, and these elements form the Buddha Mahavairocana, the fundamental deity of Shingo Buddhism, or the life force that is the origin of everything and that illuminates all. The goal of Shingon is the realization that each one of us is identical to Mahavairocana in nature, a goal achieved through initiation, meditation and esoteric ritual practices.

Many of the statues have bibs, which provide the only colour in the cemetery. The bibs are placed on the statues by those who have lost children, in prayer to Ojizo-Sama, who is the guardian of children. It is said that the souls of children who die before their parents are unable to cross the mythical Sanzu River, as the children have not been able to undertake enough good deeds. Ojizo-Sama saves these souls from the eternal penance of piling stones on the river bank by hiding the children’s souls in his robes and this is symbolized by the bibs on the statues.

At the end of the long pathway through the cemetery, there are three wooden temples in front of the stone bridge that leads to Kobo Daishi’s mausoleum. A group of four monks, again in orange robes and geta, walk noisily from temple to temple, stopping to pray and chant at each one. The stone bridge depicts the entrance to the precinct of the mausoleum of Kobo Daishi. The bridge was originally wooden but it’s now rebuilt in stone. It has thirty six stone planks that, with the bridge itself, mark the thirty seven Buddhist deities of the diamond world mandala, which is the representation of the unchanging cosmic principle of the Buddha.

To the right of the mausoleum, up the steps from the bridge, is the Torodo, the lantern hall. This is a plain wooden building, a modern reconstruction of the prayer chapel of 1023, erected by the disciple Shinzen. In 1016, a poor woman sold her hair to buy a lantern to pray for the rest of her deceased parents. The Emperors, Shirakawa and Showa, donated lanterns also, in 1033 and 1948 respectively. These three lanterns are kept burning continuously in the hall.

Inside the mausoleum itself, monks sit at stalls at the front copying sutras carefully. The wooden building is dark and atmospheric. Lanterns and pendants hang from the low ceiling. Two monks flank another who sits in the middle of the temple chanting. Incense burns and the only colour is from the orange robes of the monks. I feel I’m encroaching on a sacred service, but another monk waves me forward for a closer view. It feels very spiritual with the chanting and the incense. It even smells other-worldly. I’m apprehensive about intruding further. On my way out, to my embarrassment, I noisily slip on the wet entrance floor. Nobody notices. Outside I catch my breath. The tomb is usually closed. I was only inside for a matter of perhaps five minutes but it felt like time stood still inside. The gobyo (tomb) has an aura that I have felt only in a few other places. 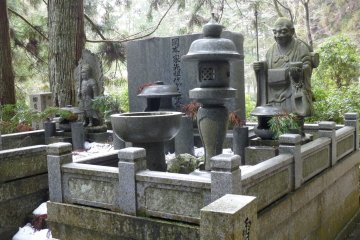 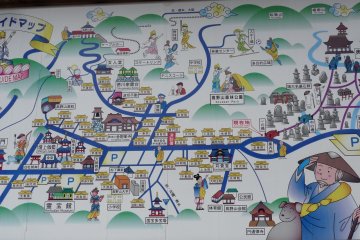 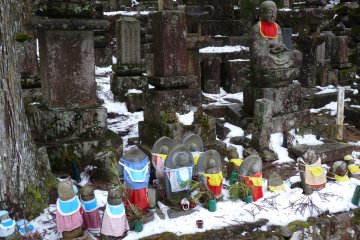 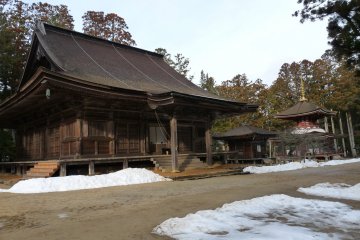 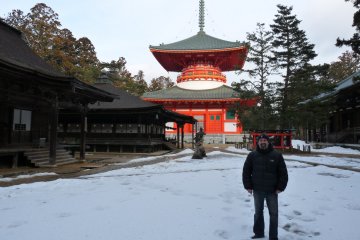