Only the best local ingredients from Yamagata

She calls herself a sommelier, although she deals with food and not with wine. Owano-san is the owner of Orizuru, a restaurant in Kaminoyama Onsen that serves home-style cooking based on local ingredients.

All ingredients are sourced from local farmers. Owano-san buys from farmers directly and she goes out to the farms to observe how vegetables are grown there. She buys only organic vegetables and fruits.

Talking to Owano-san, who used to be a hotel restaurant manager, it soon becomes clear that she has a lot of respect for food.Before lunch is ready she explains how she runs this restaurant which she bought with her retirement budget.

She does not waste any part of the vegetables. For example, the hard stems of broccoli, which are usually thrown away, are used to make pickles.

She also does not buy vegetables of Class A quality (top grade, "mostly shipped to Tokyo") but she buys Class B vegetables, which "might not look perfect but still taste great".

As a result of her careful economizing, her dishes are reasonably priced, yet they consist of high quality ingredients.

Owano-san uses only seasonal ingredients in her dishes. This is why her cooking is changing with the seasons. For example, in summer she serves cucumber which she never puts on the plate in winter. "It is not a traditional winter vegetable in Japan." In Winter she creates dishes with daikon (Japanese white radish), renkon (lotus root) and broccoli, which are considered to be winter vegetables in Japan.

Hoshi kaki (dried persimmon) is her answer to Californian raisins. In winter season, persimmon hang out drying right by the entrance of the restaurant.

Owano-san is also a kobo (burdock) advocate. This is a root vegetable only eaten in Japan, China and Korea. It is healthy but many foreigners consider it "wood".

Owano-san puts her actions where her mouth is. She is not only preaching about good food but she is also teaching children how to eat healthily, and she is the "local food coordinator" for a volunteer group that aims to preserve Kaminoyama's traditions and heritage. This volunteer group calls herself "Heisei Kaminoyama Samurai" and they focus on local culture, traditions and food.

One of their projects is "samurai food". They are researching what kind of dishes samurai ate and then they are re-creating these dishes. "Samurai food" is on the menu at Orizuru on Saturdays.

Orizuru is a small and cozy restaurant. This compact size of the place makes it easy for Owano-san to talk to her guests. The favorite seats of insiders are at the counter as this is the best place to get Owano-san's advice on healthy eating and listen to her "food stories".

I went to Orizuru for lunch and ordered her famous "plate lunch" set for yen 1,100.

On the main plate was the following: (top) three types of fish - tara (cod) sawara (mackerel) and wakazaki - fried like tempura with sour cream; (left) renkon; (middle) an arrangement of steamed broccoli, cauliflower, chrysanthemum flower petals, and a large green olive; (right) soybean sprouts; (bottom) pieces of cucumber and daikon pickled in sake and sun dried persimmon. In addition there were a bowl of rice and a bowl of miso soup.

I was curious about the "samurai cuisine" and asked what was in it. Owano-san explained that samura ate a lot of dried food, pickled food and fermented food. They also mixed wheat into their rice. Interestingly, not much meat or fish was on their menu!

Kaminoyama is a former castle town but the Edo-Era castle was torn down and only a reconstructed keep remains now. However, there are still some samurai residences for those who want to get into a historical mood before trying out the samurai's food.

Let's not forget that Kaminoyama is also an onsen with a history of over 500 years. Maybe Kaminoyama's samurai did not only eat well but they also relaxed from battle on hot spring water? 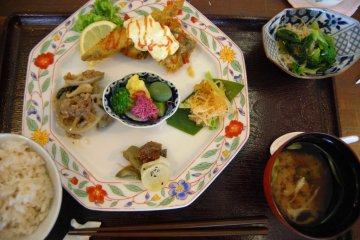 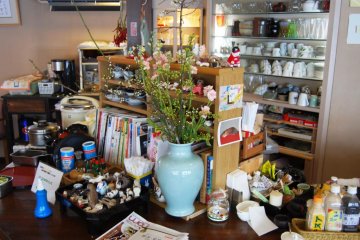 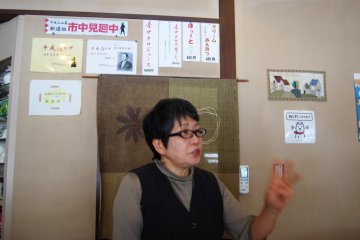 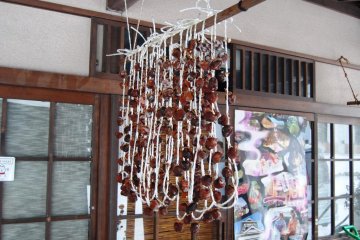 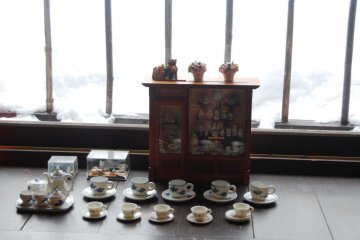 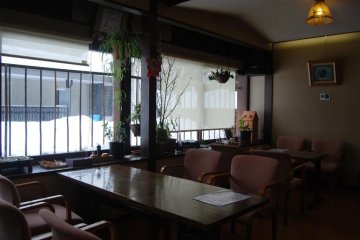