Walk Around Ohzu-shima Island and Be a Gourmet in Shunan

Let's start your adventure to Ohzu-shima Island! The trip starts from Tokuyama Station, just 10 minutes by Shinkansen from Shinyamaguchi Station. You can easily reach the station by taking a shuttle bus from the Yamaguchi-Ube Airport, which is well connected to Haneda Airport with JAL offering four flights per day.

Ohzu-shima, an island of history and tourism

Walking 3 minutes from JR Tokuyama Station to Tokuyama Harbor, embark on a ship headed to Ohzu-shima Island (20-45 minutes). Get off at Umashima Harbor, the first stop, and head to the Kaiten Museum.

"Kaiten" translates to "human torpedo", an invention created in the last year of WW2 in hopes to turn the war. These specialized weapons carried a tremendous amount of explosives and were operated by pilots who attacked enemy battleships with their own vessels. A training base was established in Ohzu-shima, where elite pilots, around the age of twenty, were gathered from across Japan to take part in intense daily drills. This museum aims to continue to remember the history of the "Kaiten" human torpedo, to pass down these stories to younger generations, and to create a peaceful future. A special unit of volunteers teach guests about the invention and utilization of the "Kaiten" and the tragic stories of the young people who sacrificed themselves.

These days, there are few places to eat and relax thanks to the aging population and decreasing number of tourists to the island. The previous Fureai center was incredibly limited, yet now the people of the island have come together to support the opening of the new, welcoming cafeteria, Hinata.

There is a hotel, Koyaba Tada Tada, for only one group per day in the southern area of the island.

Appreciate delicious fugu at an affordable price at Shunan

The waters around Shunan City and Himeshima Island are ideal for fugu, or pufferfish; the strong currents and rocky seabed make an ideal environment for juvenile fugu.

Therefore, the people in this area have a long history of fugu fishing, yet most have always been exported to Kansai.

Because the fish has sharp teeth that can cut ropes, locals had to develop a unique way to catch these defensive fish. There are many techniques used, but among them the best is a type of longline fishing that doesn't hurt the fish; this technique requires copper wire produced on Sukumojima Island in Shunan City. This way of fishing, which protects the fish and allows the catch to stay fresh all the way to market, was invented by Iyosaku Takamatsu, a local fisherman, who was awarded a prize from the Tokyo Peace Exposition in 1923. 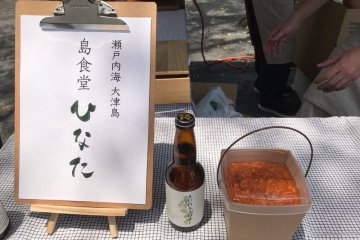