Food, drinks and jazz in a chilled atmosphere

While you're exploring the sights in the southern part of Hirosaki, such as the 33 temples of Zenringai or the five-storey pagoda at Saisho-in, you might find yourself wanting to stop off for a rest over a meal or snack, like I did. Lemon Cafe is a good place to do just that: just round the corner from Saisho-in, it serves tasty and reasonably priced food in a soothing atmosphere.

The entrance is kind of cluttered, but the interior proper is spacious and airy, with a high ceiling supported by thick wooden columns and beams, lending the place a vaguely farmhousey feel. It's also kind of upmarket, with soft lounge jazz playing in the background, and a piano in the corner with a case full of CDs and sheet music behind it, which I imagine gets an airing at the regular live jazz shows held here.

Hirosaki being the self-styled apple capital of the country, I felt duty-bound to start with the fresh apple juice, so I did; it was crisp, tasty and very smooth, wakening my palate ready for my keema curry. This was mild and tangy, served with a good helping of rice, a simple salad and a small dish of crunchy pickles which complemented it very nicely.

I decided also to treat myself to dessert, having found on the menu a 'dessert set' of apple terrine with ice cream. This turned out to be smaller than I'd expected, but sumptuously presented, the ice cream perched on top of the terrine to melt over it, dusted on top with cinnamon powder. It tasted as good as it looked, the terrine satisfyingly fruity, and neatly offset by the cinnamon's fragrant tang.

As well as my curry, main dishes on the menu include a handful of pasta standards, and come in at around ¥800. For between ¥500 and ¥600 there's a good range of coffees such as American and Mocha, or teas, among them Assam, Earl Grey and Darjeeling; or if you want something harder, the drinks menu also includes beers, bourbons, scotches and wines. Alongside my dessert set on the sweets menu are chocolate cake and cheesecake, from ¥400, an inexpensive way to enjoy an afternoon break or complete your lunch or dinner. 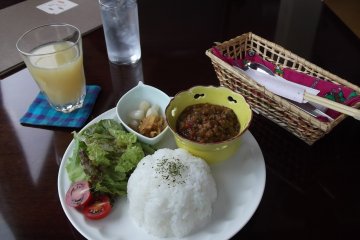 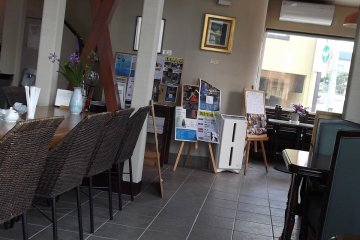 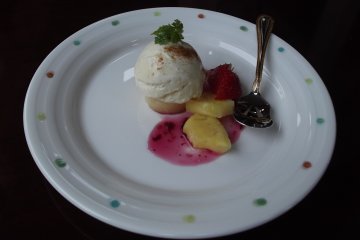 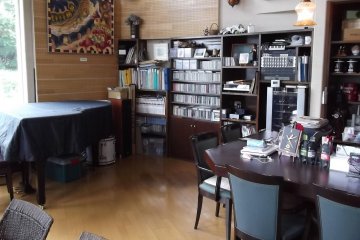 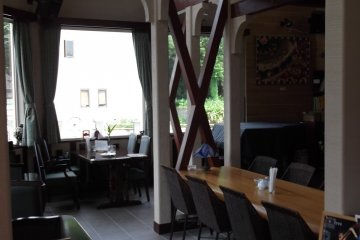 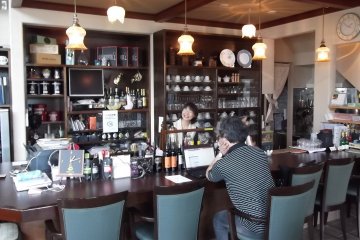 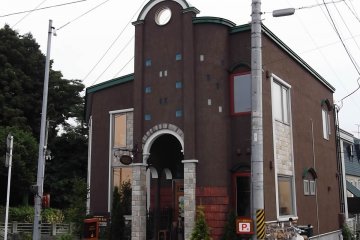