Kuma Highland—Kuma Kōgen in Japanese—is a large inhabited area at a high elevation in central Ehime bordering Kochi Prefecture. It encompasses an astonishing range of geological features, which makes it a fascinating area to visit. But be warned—once you’ve scratched the surface at Kuma, you’ll be drawn back again and again to explore further!

Kuma is officially a ‘town’, although it’s basically a wilderness with some inhabited valleys and a central village. It has an interesting foundation myth. Kuma is the name of a woman who allegedly lived all alone in this once poor area. When the celebrated priest Kobo Daishi and founder of the Shikoku pilgrimage passed through, she begged him to provide her with company, so he miraculously produced a river. This enabled crops to be grown, and soon farmers arrived. Kuma had company. The town that they established is named after her. The river still flows, crops still grow, and the people of Kuma remain very welcoming to strangers.

Two of the most atmospheric temples of the 88-temple Shikoku pilgrimage are located in Kuma Highland, a short distance apart. These are Taiho-ji and Iwaya-ji. Between the two temples is an area with fantastic rock formations called Furuiwaya. Other noteworthy geological features are the Shikoku Karst in the south of the area, the Omogo Gorge on the southern side of Mt. Ishizuchi, and the Goraiko and Gongen Waterfalls.

The best way to visit Kuma Highland is to hire a car and spend several days touring the area, using the abundant accommodation available. If you intend to visit the area between mid-December and early May, be sure that your vehicle is equipped with winter tyres (called ‘studless tyres’ in Japanese)—or maybe wait until it gets warmer. For those on a budget, hitchhiking is another option. I can attest to the fact that Japanese are not at all averse to picking up even the scruffiest-looking foreigners.

One major attraction is the Kuma Kogen Furusato Ryokō Mura, a ‘village’ of relocated but authentic thatched farmhouses, including a watermill. There’s also a planetarium disguised as a castle and a public astronomical observatory which takes advantage of the high elevation and clear skies. The pine woodland of the village is dotted with attractive cabins for rent, and there’s also a camping area. There are several eateries within the village, and two onsen hot spring facilities are within a short drive.

Kuma isn’t all nature though—there’s art too. The Kuma Museum of Art is one of several places to enjoy something wrought by human rather than Nature’s hand. 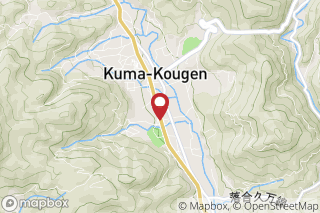