Okutama Town was formed out of the merging of three smaller municipalities in 1940 and is now rightly considered to be one of the most beautifully natural areas in all of mainland Tokyo. Dominated by Okutama Lake, much of the history is prehistoric though its natural beauty provides plenty of landmarks. Here is a simple introduction to these locations and how to reach them.

Close to Tokei Bridge, Hikawako Bridge is another suspension bridge located at the junction of the Nippara and Tama rivers. The bridge offers up some great views over the nearby Hikawa Gorge, a great spot for some easy camping and exploring. A visit during the autumn season is highly recommended.

A 9-minute walk from Okutama Station on the JR Ome Line.

Well worth the challenge it takes to get there, Hyakuhiro-no-Taki Falls is one of Tokyo's most impressive waterfalls. A series of smaller waterfalls lead up to it where, from a height of some 40m, the falling water gives off a fantastically refreshing experience. The falls require proper preparation to visit.

A 1-hour hike from the Mt. Kawanori mountain trailhead, itself a 13-minute no.20 bus ride from Okutama Station on the JR Ome Line.

A real blast from the past, the Kotozura no Taishido Butai is traditional performance stage dating back the mid-19th century. Now a Tangible Folklore Cultural Property, the stage was originally located in the now submerged Ogochi Village and features a revolving stage system and an enshrined statue of semi-legendary 6th century Prince Shotoku.

A 30-minute no.10 bus ride from Okutama Station on the JR Ome Line.

On the western reaches of Lake Okutama lies a a series of bridges, ending with the curious Tozura Pontoon Bridge. With its strong sense of isolation and views that are simply lovely, the roughly 200m-long bridge can rise some five meters according to the water level of the lake, making for an interesting experience. 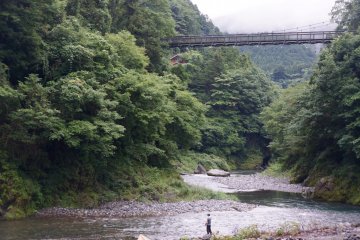