Then and now combine in Tokyo's gritty centre

Famous for its seemingly harder edge, Toshima City Ward is an underrated repository of history, heritage and modern excitement. The city is home to an eclectic mix of the past and the present. Here is an introduction to some of the landmarks and historical spots of Toshima and how to reach them.

Once the residence and religious centre for American missionary John McCaleb, the Western-styled McCaleb Old Missionary House has been registered as a Tangible Cultural Asset of the city. Home to numerous performances, the building features two storeys of early 20th-century American design.

The 360-degree view from Sky Circus Sunshine 60 Observatory is a mind-boggling delight of stimulation. The 250m observatory also features virtual-reality technology to help excite along with optical illusions, kaleidoscopes, trampolines and much more. The JPY1200 adult admission fee should cover everything. A 4-minute walk from Higash-Ikebukuro Station on the Yurakucho Line or 7-minutes from Ikebukuro Station on the JR Yamanote Line.

Only in Tokyo would you find a world-class rooftop aquarium in the middle of a busy metropolis. The multiple floors of Sunshine Aquarium delivers with its three exhibition areas - Sky Journey, Waterfront Journey and Ocean Journey. The JPY2400 admission for adults is an expression of the quality to be had here.

A 6-minute walk from Higashi-Ikebukuro Station on the Yurakucho Line.

The city's Zoshigaya Rei-en is an historical cemetery that was founded in the early Meiji period. Peaceful and serene, many celebrated and well-known non-Japanese rest here. Surprisingly large in size, the cemetery makes for a strangely relaxing stroll but do bear in mind the sombre purpose of the location. Manners please.

A 5-minute walk from Toden Zoshigaya Station on the Tokyo Sakura Tram Line. 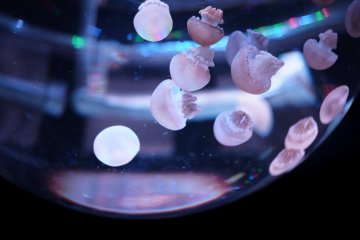