When it comes to parks and greenery, Ikebukuro seems to have been dealt a poor hand. However, looked at from another perspective, in eastern Ikebukuro there is a spacious 10 hectare (approx. 25 acre) "park" with an abundance of peace and quiet, many trees as well as some interesting historical facts. A stroll through the Zoshigaya Cemetery is both relaxing and informative.

In Japanese, the word "cemetery" has two quite different meanings. The first and most common term is "bochi". Bochi are small; Buddhist only; affiliated to an adjacent temple or nearby temples; and gated. They may or may not have rest rooms, or other amenities.

The second term "reien" is translated as "spiritual garden" or "spiritual park". Reien are large (Aoyama Reien is 26 ha, while Tama Reien is 126 ha!); open to all religions (though, in practice, primarily Buddhist with some Christian graves); public roads go through them; there are restrooms, vending machines, benches, shops for flowers and incense etc., and many trees. In addition, there are maps, and reien have a numbered grid to help you find a specific location. For some reason, famous people (actors, writers, artists et al) tend to have a memorial in a reien. This is not to say that everyone in a reien is a celeb.

One thing that both bochi and reien share is that the overall atmosphere is very intriguing. In life, it is safe to say that most Japanese are conformist. In death, however, a good deal of individuality is often expressed in the graves. They vary in size. Some have stone lanterns, miniature torii gates, river rocks, pieces of lava, mausoleums and so on. Many have "sotoba", long wooden sticks with the deceased's posthumous name written on them. In addition, some tombstones have etchings - cherry blossoms and Mt. Fuji are common. But if someone had particularly liked golf, cats or driving this would be reflected in the headstone. And lastly, there are the various offerings: flowers, of course, both real and artificial. Plus a can of beer, a bottle of water and so on is often placed on a headstone as a refreshment gift. Contrast this with the row upon row of crosses or the cookie cutter headstones in typical Western cemeteries.

Zoshigaya Reien was established in 1874 and now has 9,000 "guests". I'm sure you will enjoy the space, the open sky and the silence. Explore the paths and appreciate the diversity of the graves. I see something new and interesting on each visit.

You never know what you'll find. Once, while wandering around, I discovered an overgrown memorial: Major Richard Wharton Boger (1866-1910) "Royal Artillery Military Attache to the Britannic Majesty's Embassy". His epitaph was:

if love could save
thou hadst not died

I still find it to be very moving. I contacted the British Embassy. They hadn't known about Boger's grave and in a short time it was given the attention it deserved. (1-4A-5 in the Zoshigaya grid)

Other people of note

If you are interested in discovering more, check out this link for English language information about the graves of all the famous people at Zoshigaya.

As the Zoshigaya Reien is large, there are several options, but I think this is the easiest way:

Travel to Higashi- Ikebukuro Station, on the Yurakucho Line. Take exit 7 to street level, then go left to the main road. Cross at the traffic light to the Jugar Café side of the street; dogleg left, then take the first right. Or instead of turning right, go straight for a few paces and you'll see A Raj, the best Indian restaurant in Ikebukuro. They specialize in South Indian dishes. After your meal, backtrack to the corner and turn left.

In either case, walk straight, cross the Toden Arakawa Line tracks. You will see a koban (police box) dead ahead. Stay on the right and then take the first left. Welcome to Zoshigaya Reien! You can't miss seeing a yellow-orange coloured building. It is a public restroom. Opposite, there is a large detailed map of the cemetery.

You will be at the lower left corner of the map. To get your bearings, walk along the road. At the right fork of the "Y" junction, you will find the reien's office. You can get English-language maps of the cemetery there.

The left fork will take you past a flower shop, on your right, and then you will come to an area of Christian graves, also on your right. There are 24 graves of women with The Society of the Sacred Heart who died in Japan between 1916 and 1953. They were instructors for the higher education of women. (Christian graves can be found randomly distributed in this reien.)

Next to these graves, is the one for Raphael von Koeber (1848-1923). He arrived in Japan in 1893 and taught philosophy at Tokyo Imperial University 1893-1914. The famous writer Natsume Soseki was one of his students. 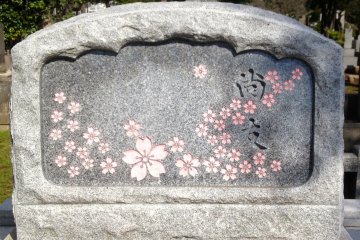 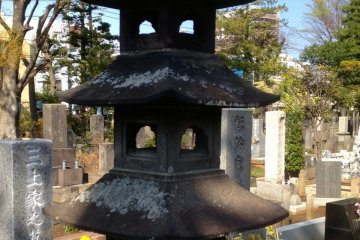 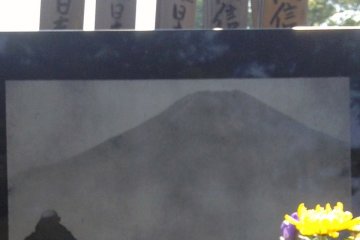 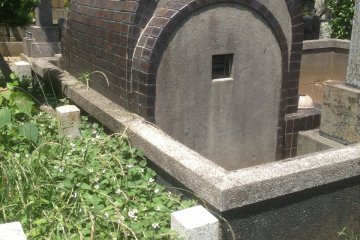 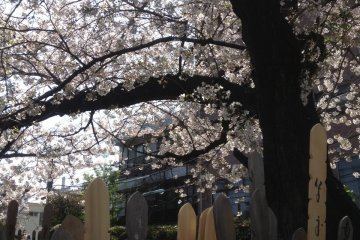 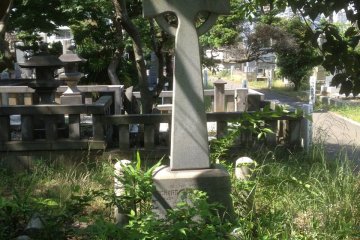 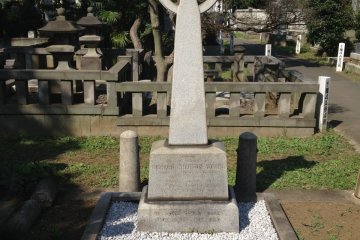 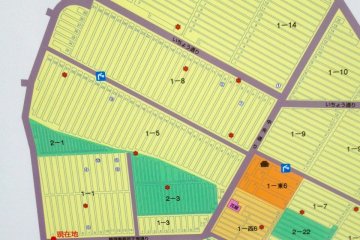 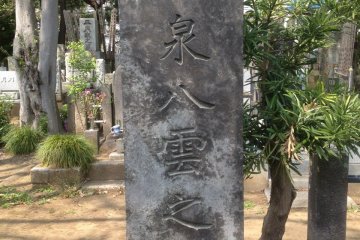 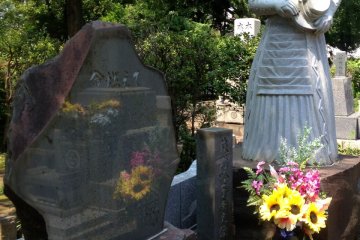 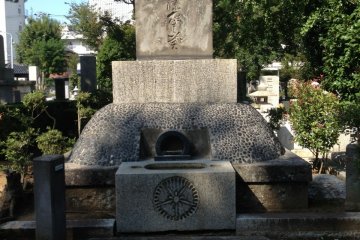