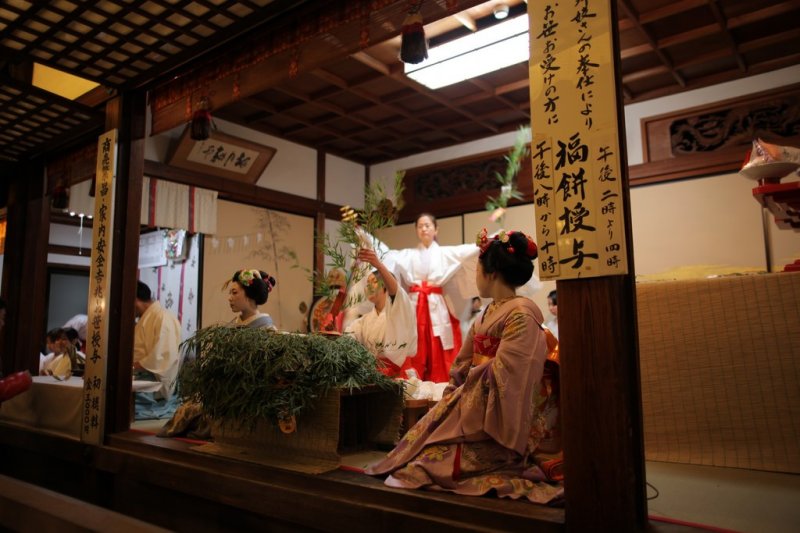 From the 8th to the 12th of January, Yasaka Shrine in Kyoto will host the city's first major festival of the year, the Ebisu Festival. This is dedicated to Ebisu, called "Ebessan" in the Kansai dialect, the god of good fortune and prosperity. This event has been held ever since the Edo era (17th-19th century).

During the festival thousands of visitors crowd into the shrine, to pray for success in work and business. People usually buy Fuku-Zasa, branches of lucky bamboo grass which have been blessed in a special ritual, and they buy special talismans and lucky charms, to attach to the branches. After praying at the shrine's main altar, people walk in a row near a wooden board and knock on it, to wake up Ebisu and ask him to pay attention to their prayers.

During the Festival there are number of special events and rituals. In the Yudate Kagura Ritual, a maiden immerses bamboo grass in a pot of boiling water in front of the altar, then sprinkles it over the crowd; there's the Hoekago Parade, where performers enter the shrine dressed in Edo-era costume; and in the Lucky Maguro Tuna Dedication, local fishermen pray in front of the main altar for an auspicious New Year, and dedicate a 150kg tuna to Ebisu. During the festival, Maiko (geisha trainees) from the geisha district of Gion sit in the main hall and give out branches of lucky bamboo.