The metronome like sound of tea beating punctuates my stay at Horaido's tea shop in Teramachi Kyoto (Photo: Bonson Lam)

Come face to face with the professor of tea

What does the word delicious mean to you? Comte cheese? Seaweed ice cream? What makes a taste appetizing for one person and not to another? Musing over these thoughts, Mr Yasumori takes me on a philosophical journey over a cup of Gyokoro and Sencha tea, two of the most prized varieties in Japan.

Little did I know, but based on his sales and conversations over the years, the French prefer Gyokoro while Germans prefer Sencha. On the other hand, the folk from the East coast of United States prefer Gyokoro while west coast prefer Sencha. My wife on the other hand, prefers Sencha, being a tea that is easy to drink, while Gyokoro is more like an espresso coffee, rich and requiring more diligence to brew. It is this kind of mindfulness that reminds me of the meditation associated with a tea ceremony.

Actually, I knew little about their difference before I came here. Gyokoro leaves are kept under shade for nearly a month before harvesting, allowing it to develop its unami¸ something similar to the taste of seaweed. Mr Yasumori then proceeds to show me a catalog with pictures of Japanese tea, asking me to identify each one. I thought that the best green tea was green in color. Actually, Gyokoro is yamabuko or mountain flower lime yellow in color. On the other hand, what I thought was black tea was actually roasted green tea, as Kyoto only makes green tea, while black tea is grown in places further south. The reddish brown hue in what I thought was black tea is actually the results of roasting.

Wandering inside Mr Yasumori’s tea shop is like rummaging through your grandpa’s attic. There are antique clay jars as well as tea caddies with an aged patina which I wasn’t sure was new or used, and other little treasures that I had not noticed in my ten years of traveling in Kyoto.

The wood framed workshop and shop front is well worn with the daily travails of three generations of tea merchants, and while the yellowing prints show the passing of time, Horaido’s is no museum trapped in a time warp, but a living workshop renewed by the tea harvest each year.

As we debate the cultural peculiarities of taste, there is a constant sound of activity in the background. From the metronome like beating of the tea packs to the old black phone ringing in the background, I am reminded that I am in the epicenter of the Teramachi markets. Once marking the Eastern boundary of Kyoto, families and chefs having been coming here to get the best tea individually blended for them. Over time this shop has been dwarfed by newer shops as the city expanded, however Mr Yasumori’s shop has kept its original workshop like atmosphere.

Horaido's tea shop is very much the fruit born of a relationship between two established Kyoto families. These days, as a shinise, the original owner’s grandchildren run it, meaning they have access to many tea plantations that are off limits to other shops. They only sell Uji tea from Kyoto prefecture, so they can meet and chew the fat, so to speak, with the owners of the tea farms.

Mr Yasumori tells me that Uji tea is changing, with some using some are using automated processing methods, with modern machinery and vacuum packing. While this keeps the taste constant for longer, he likes the traditional way of storing tea, by putting them in the wooden box or clay jar, and using the weight of the tea leaves itself to act like vacuum packing to keep excess air out. The little air left in the jar allows the tea to mature, like wine in a corked bottle. The taste would then be richer. Traditionally matured tea allows the tea maker to use his talent to pick and blend the best tea according to the season. He would keep tea in the clay jar for around six months, and as time passes, the older tea is blended with right portion of the newer tea to keep the right balance between maturity and freshness. The taste is a bit sweeter when it is more mature, and this is very much in demand with professional tea drinkers. Many customers want a certain mix, but they should let the tea master make the blend of old and new tea according to the season.

He also dispels another myth, in that the cloudy green tea idealized in television commercials is actually a cheaper grade of tea as it contains what is known as tea dust. Not dust itself but tea plant particles which are a byproduct of the tea making process, which results in three items, tea leaves, stem and "dust". Someone who orders cloudy tea from a tea maker actually makes his job easy as he doesn't have to separate the dust, while the finest tea only contains the leaf part, after sifting out the dust and stems, by drying and rolling. He even has cups with a special shaped bottom to collect and show up the dust in any tea. A round shaped cup bottom doesn't separate the dust quickly while a cup with a special edged collector will show up the dust quickly.

Mr Yasumori then treats me to a tasting of Gyokoro tea, with the taste of each infusion being markedly different. In the first steeping, he barely covered the tea in 40 C lukewarm water for 3 minutes, to slowly tease out the flavor. Each steeping gives a different flavor, as a different aspect of the tea leaves are being revealed each time. When he pours the tea, there is so little liquid, like expresso coffee, that the tea almost comes out like drops of yamabuki pearls. It is filled with umami, a taste that most English speakers would find hard to describe, but to me, it is like seaweed, slightly salty and savory, but there is no seaweed to be found. There is a whole complex interplay of flavors dancing in your mouth.

The third infusion has a bitter then savory aftertaste, while the fourth infusion is a blend of both. It is like the tea leaves, bathed and slowly awakened by the warm water, is slowly revealing its characteristics like a flower, slowly blossoming and revealing her inner beauty.

Please note that the store is closed on the 2nd, 12th and 22nd of every month, as well as the 7th, 17th and 27th except when it falls on a Saturday, Sunday or public holiday.

Horaido's tea stall is a short walk from Kawaramachi Street and Nishiki Market. 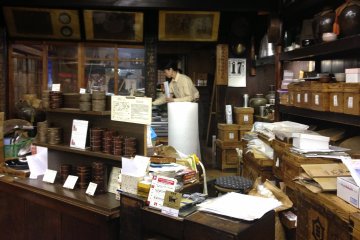 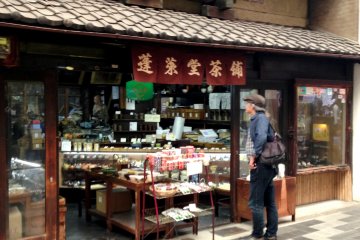 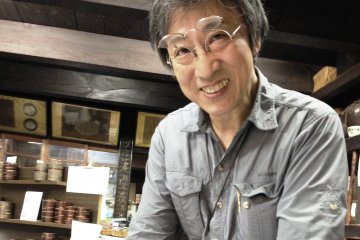 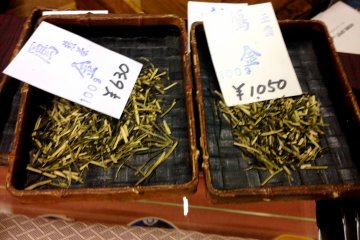 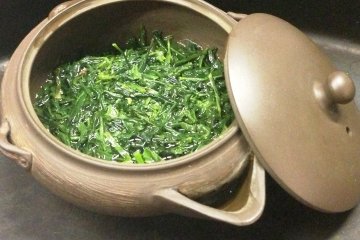 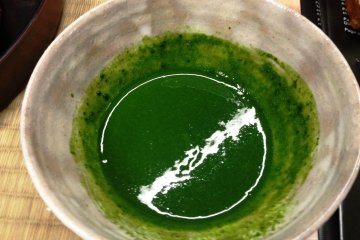