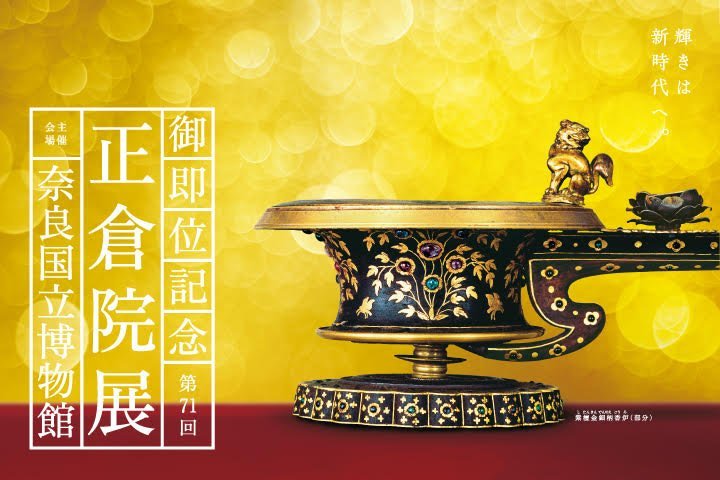 In Commemoration of the Enthronement

The Nara National Museum will hold the 71st Annual Exhibition of Shōsō-in Treasures. The exhibition, which allows the public to view the treasures stored in the Shōsō-in, will run from Saturday, October 26th to Thursday, November 14th. Forty-one objects will be on display—mainly items related to the aristocratic and Buddhist culture that blossomed around the capital of Nara (Heijokyo) in the 8th century—including four items never previously exhibited. The exhibition is hosted by the Nara National Museum in partnership with The Yomiuri Shimbun newspaper. This year the exhibition marks the accession of the new emperor, which is a special occasion. An exhibition of the Shōsō-in Treasures will also take place in Tokyo.

The Shōsō-in used to belong to Tōdai-ji Temple. It is a treasure house and registered World Heritage site. It stores approximately 9,000 items with utmost care, including art objects that were donated to the temple and used by Emperor Shōmu (701–756) who built the Great Buddha at Tōdai-ji Temple. Lacquered Red Zelkova Cabinet, passed down from Emperor Temmu in the 7th century to the following six generations, will be on display during the exhibition.

It is an object listed in the Record of the Nation's Rare Treasures (Kokka Chinpō Chō). The Shitan (red sandalwood) incense burner, with a long handle, a lion embellishment and gold inlay ornamented with crystals, is regarded as an especially fabulous treasure among all existing incense burners of its style.

The museum is open during the entire exhibition period. Regular opening hours are 9:00am to 6:00pm (open until 8:00pm on Fridays, Saturdays, Sundays and national holidays). Last entry is 30 minutes before closing time.

Entry to the exhibition (same day) is ¥1,100 for general admission, ¥700 for senior high and university students, and ¥400 for junior high and elementary school students (with a ¥100 discount on any type of ticket bought in advance).

Admission is free on November 14th to celebrate the accession of the new emperor.

This exhibition has continuously taken place in Nara every year since 1946, excluding years when exhibitions of treasures have been held in Tokyo.

This year marks the accession of Japan's new Emperor, and 'Shoso-in: Essential Treasures of Ancient Japan Passed Down By The Imperial family', a special exhibition celebrating this event, will be held at the Tokyo National Museum (Ueno, Tokyo) from October 14th to November 24th.

This event will be organized by the museum, The Yomiuri Shimbun and others.

This will be the first time that two exhibitions featuring Shōsō-in Treasures have been held during the same period, making this year a golden opportunity to experience treasures of the Shōsō-in for yourself.

At the Tokyo National Museum exhibition, Raden Shitan no Gogen Biwa (Five-stringed biwa lute of shitan with mother-of-pearl inlay), regarded as the finest work of this historical and regional context, will be on display. This piece appears in the above mentioned Record of the Nation's Rare Treasures. The Hōryū-ji Temple treasures, which are similarly passed down by emperors and thus rival the Shōsō-in Treasures, will also be on display.

This exhibition will allow you to admire the beauty of the Asuka and Nara periods, comparing for example Shikkohei (Persian-style lacquered ewer) which is one of the Shōsō-in Treasures, and Ryushu Suibyo (Pitcher with dragon-head), as well as others. Please note the contents of the exhibition are subject to change.

The museum is closed on November 5th and every Monday except October 14th and November 4th. Opening hours are 9:30am to 5:00pm (to 9:00 pm on every Friday and Saturday and also on November 3th and 4th). Last entry is 30 minutes before closing time.

Entry to the exhibition (same day) is ¥1,700 for general admission (with a ¥200 discount on any type of ticket bought in advance).