The number of summer days when the waves on the Sea of Japan are big enough to surf is limited, so when those days do roll around it’s very rewarding to take full advantage of them. There are a number of surf spots along the coast to the north and south of the central Niigata area and more further out into the country side but one easily accessible spot that has consistently produced a fun and safe ride is Ikarashi Cospo Beach. Featuring white sand, dunes dotted with green grass and purple flowers, great views of Sado Island, warm green-blue water shallow enough to touch bottom several yards from the shore, and mellow easy to ride waves (usually) it’s no surprise that Ikarashi Cospo is a favorite spot.

No beach is without hazards so pay attention to get the most out of your surfing experience. There are emerged tetrapods (4 pronged cement blocks used to break up waves) on the far far right (when facing out to sea), and some on the shore on the far right of the beach as well, it goes without saying that they are to be avoided, there is also a large cement runoff water outlet (visible in the first 2 pictures) lined with tetra pods jutting out from the beach not far from where people swim or surf. On the right side of this outlet, in the band of deeper water between the beach and the sand bar where the waves break, there is a current that flows toward the outlet, keep your distance! I’ve had one close call and it’s not something I want anyone else to go though. There is no current on the left side of the outlet and the water is shallower and easier to navigate. Walking out on the left side of the runoff outlet and then paddling out from there is the easiest route out. There is even a gap where the waves either don’t break or break very gently which makes getting out easy. Once you are out paddle until you are well to the right of the outlet (it will be your left once you are out at sea and facing the beach). A good reference point is the gray back of a sign on the dunes. Put that sign directly in front of you and start surfing from there, or take your cues from the people around you. Biggest wave sets break farthest to the outside and usually produce the longest rides, smaller sets break further in and close out (break all at once) sometimes. Be patient and wait for the right wave, and your turn. The wave is usually a right hander (the wave breaks from left to right and you turn to the right when facing the beach to surf the wave), but waves breaking in either direction can be had at multiple places along the beach. The bottom is sandy and the water is shallow enough to stand up in many places so don’t panic if you go down. Stay within your comfort zone and don’t push it if your tired. Ikarashi Cospo Beach is well known so most times there are people there, and localism shouldn't be a problem. All the surfers I've met have been personable but use your common courtesy anyway, it goes a long way.

Ikarashi Cospo Beach is on Highway 402 (the Yuhi Sen) near the West Sports Center at the Sakai Intersection. There’s a stoplight and a sign for the sports center. The entrance to beach is obvious. Park anywhere along the road (just don’t block traffic or get stuck in the sand). If you’re coming by train, Niigata Daigaku Mae Station is the closest at about a 20 minute walk away from Ikarashi Cospo Beach. So get stoked and go surfing! 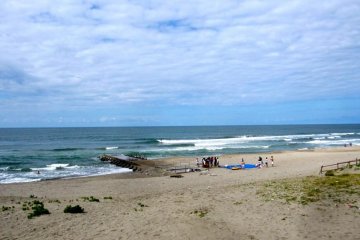 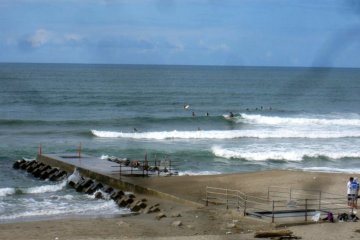 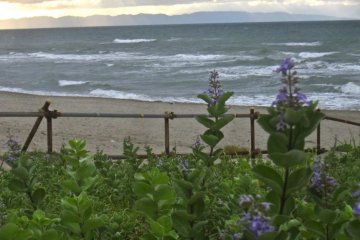 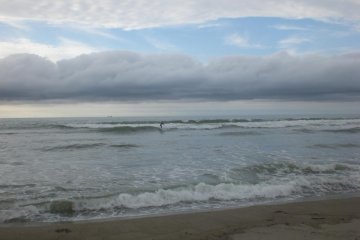