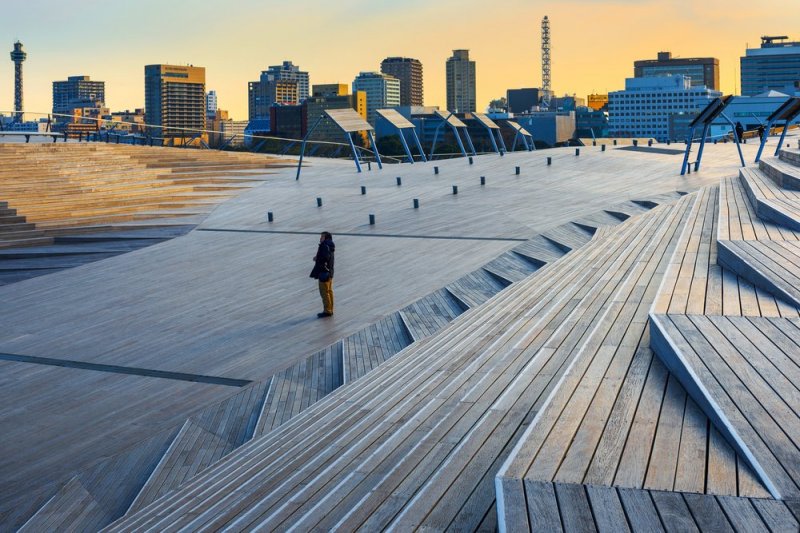 Yokohama International Passenger Terminal, also known as Osanbashi or Yokohama Port, is located at Osanbashi Pier. Osanbashi Pier, located between Minato Mirai and Yamashita Park / Chinatown, is the most important international port terminal for Japan due to its proximity to Tokyo many cruise lines from around the world stop by.

The 400 meter long pier has walkways and green spaces that are open to the public. It was originally built in 1894, but converted into a passenger terminal in 2002. The pier is one of the best places in Yokohama to get an unobstructed view of the Minato Mirai skyline. There are also shops, restaurants and a hall for small exhibitions and events here.

Known as <em>Kujira-no-senaka</em> (whale's back), the rooftop here features some of Yokohama's best views of the city’s skyline. This long walkway is also an ideal place to indulge and relax at the end or at the beginning of your cruise.

Enjoy fine dining with panoramic views of the bay at the 'Subzero' Italian restaurant on the edge of the pier, or more regular fare, an evening bar and speciality coffee line-up at Blue Terminal.

Come across a variety of Japan brands, like Motomachi's Kitamura fashion brand, souvenirs from Royal Wing, or bags by Sensui Kobo.

Celebrity Millennium is a giant cruise ship. When it enters Yokohama Bay, it has to wait for low tide to pass under Yokohama Bay Bridge.

Osanbashi Pier is astounding: It is surrounded by the sea, it features Yokohama's best view of the Minato Mirai skyline, and it is a masterpiece of funky architecture

Osanbashi Pier is wonderful. It affords a magnificent view in every direction. and is really a splendid place.

From the west deck, you can see the wonderful Minato-mirai district. And at night, the view of Minato-mirai becomes really romantic and beautiful.

Osanbashi Pier, Yokohama, is one of the nicest sunset spots in Japan. Easy access, wide open view, photogenic surroundings, and no entrance fee!

Tea Cruise, Royal Wing Yokohama: Royal Wing is an entertainment cruise ship that arrives at and depart from Osanbashi Pier in Yokohama.

On days that Aska II is scheduled to arrive at Osanbashi Pier in Yokohama, lots of people go there to see this beautiful liner.

Yokohama's Most Romantic Spot Is...

Yokohama's most romantic place to hang out? Definitely Osanbashi Pier. And even if you're alone or with family or friends, it's still beautiful, still romantic.

Whether you are a cart food cult follower, or just enjoy a simple, yet gourmet meal on the cheap, Lotus Baguette will prove a delightful little treasure

One of many Beer events throughout the year in Yokohama.  Craft Beer Competition followed by general public beer tasting

Although there are several cruising tours in Yokohama, I would love to introduce the cruise that has the most fantastic ship—the Royal Wing!

Yokohama International Passenger Terminal or "Osanbashi" is a nice place to enjoy the evening breeze during the summer.

Navios Yokohama is a reasonably priced hotel in an excellent location in the Aka-Renga Shoping District. The view from the guest room is pretty nice!

The Shin-Yokohama Ramen Museum combines museum with foodcourt with ramen to create an educational and filling event. The museum opened in 1994 and is dedicated to all things ramen. From the processing of noodles to the variations of broth soup. There is much to learn in the museum’s small, yet full, gallery. With broth soup taste samples daily on the first floor, guests can taste for themselves the differences between three types of broth. The interior of the ramen museum is also notable for resembling 1958 Japan, the year that instant noodles were invented in Japan. These basement floors are the real attraction for many visitors and especially foodies. By purchasing a ramen ticket at a machine in the center of the indoor courtyard (separate from the cost of entry), you’ll be able to enjoy a steaming hot bowl of one of the country’s famous ramens. Choose from eight different types of ramen to satisfy your noodle needs. Flavors of ramen also come in half sizes so that you can fill yourself up on as many varieties of ramen as you like.

The Hotel New Grand’s “The Café”

The Café at the Hotel New Grand faithfully sticks to Weil’s original seafood doria recipe. Why don’t you try this legendary dish when you come to Yokohama?

Aoba is a casual and friendly restaurant situated on a convenient side street in Yokohama Chinatown. The food they serve is really delicious and healthy.

When Japan opened its market to the rest of the world in the late 19th century, Yokohama was the main port through which trade flowed to the Tokyo area. The red brick warehouse, also known as Akarenga, was opened during the Meiji -Time built in support of the port of Yokohama, it served as a customs clearance point to control the flow of goods through the port. Nowadays it has various shops and restaurants. The Event Plaza hosts markets and other outdoor celebrations. In addition, the warehouse has several event halls for concerts, exhibitions and more. The Red Brick Park also offers a spacious area of ​​grass where you can relax and have a beautiful view of the bay and the passing ships.

Yamashita Park (山下公園) is a public park along YokoThe Yamashita Park is considered the first coastal park in Japan and is located directly in front of the port of Yokohama. It extends almost 700 meters from the east side of Osanbashi to the Yamashita Pier. It was founded in 1930 by filling the area with the debris of the great Kanto earthquake opened. The park includes a meadow of grass, a rose garden, the "Little Girl in Red Shoes" statue, the "Guardian of the Water" statue, which is a gift from San Diego, a sister city of Yokohama, and the memorial to that Song "" Kamome no Suihei-san (Seagull Sailor) "", a water staircase and a stage. The former cargo and passenger ship Hikawamaru is anchored here.hama's waterfront. The park was built using landfill from the remains of buildings destroyed in the Great Kanto Earthquake of 1923.

Yokohama Park is the second oldest park in Yokohama after Yamate Park and was opened to the public in 1897. With the construction of Yokohama Stadium, the dilapidated facilities of the park were renovated and a Japanese garden-style pond and creek, a fountain and a river were renovated Multipurpose space expanded. Around 140,000 tulips of around 70 varieties will be planted in Yokohama Park in November. The flowering time varies depending on the variety, but depending on the weather, the tulips are usually in full bloom from the beginning to the end of April. The park is a particularly popular travel destination at this time.