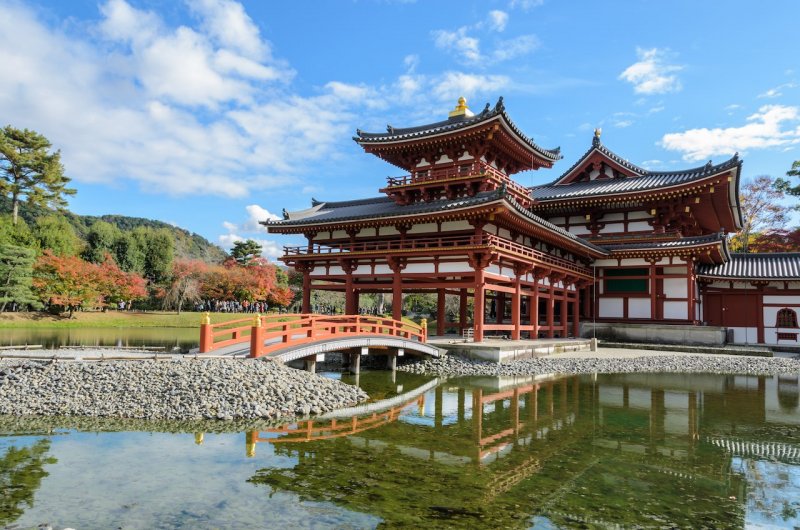 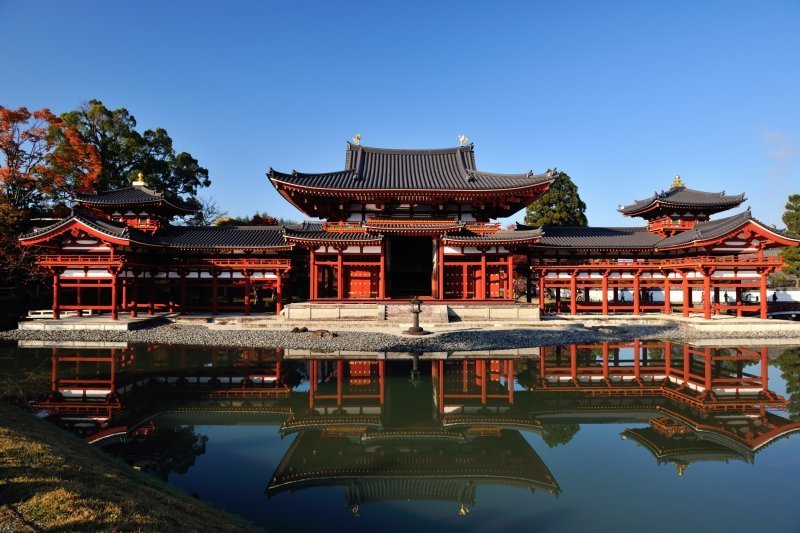 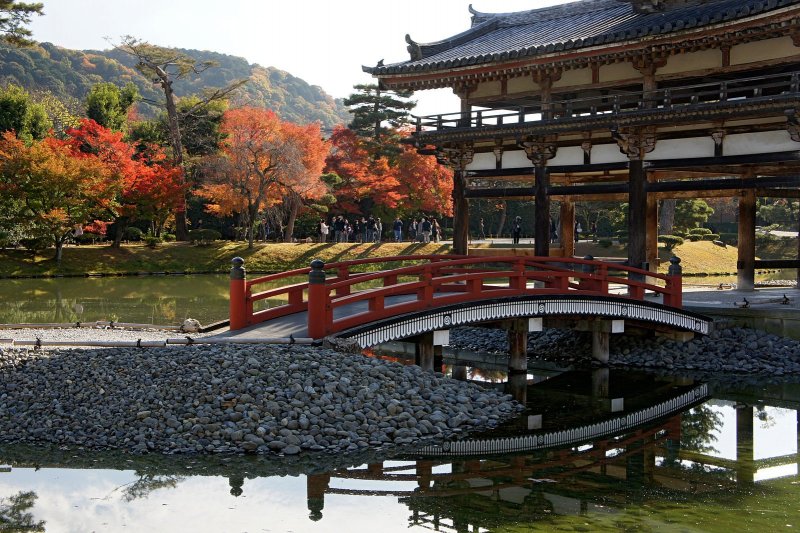 The Byodoin Temple in the city of Uji near Kyoto adorns the reverse of the Japanese 10 yen coin and is best known for its distinctive “phoenix hall”. The original building was built in 998 as a nobleman's villa and later by a member of the then Influential Fujiwara clans acquired and converted into a temple.

Over the centuries the temple complex has been expanded and expanded, among other things, by the phoenix hall, inside of which there is an Amida Buddha statue and which thus forms the heart of the temple complex. Even if its official name is Amida Hall because of this statue, it is mainly referred to as the Phoenix Hall because of the representations of the Chinese firebird on the roof.

The Byodo-in Temple has been a UNESCO World Heritage Site since 1994 and is a popular tourist destination because of its special architecture and the surrounding garden. Visitors can also admire the interior of the hall on a guided tour.

Since 1951, the Phoenix Hall of Byodo-in has been engraved into the minds of all Japanese people — with its place on the back of the everyday 10-yen coin. The hall itself was once meant to house the regents of the Fujiwara clan, but has since been converted into a place of worship for Buddhists. Within it can be found the Amitabha Tathagata statue, a designated National Treasure of Kyoto. Look out for the two golden phoenixes atop the roof of the aptly named Phoenix Hall.

On the sprawling temple grounds is a traditional Japanese garden. Designed based on the Jodo Garden style, it is a prime example of Heian period gardens. The landscape of the garden was designed to recreate the ‘Buddhist Pure Land’, complemented by the clear Aiji-ike Pond and majestic backdrop of the surrounding mountains. Byodo-in’s garden is also the oldest remaining Jodo-style garden, and was thus enshrined as a National Historic and Scenic Beauty Site.

The Phoenix Hall of Byodoin in Uji

The Phoenix Hall at Byodoin Temple in Uji is the very image of Buddhist heaven.

The Byōdō-in Temple as represented on the Japanese 10 yen coin can still be seen and visited today.

Enjoy the beauty of renewed Byodo-in Phoenix Hall in Uji City, Kyoto, after a two-year renovation!

Beyond Phoenix Hall at Byodo-in

There are other temples inside the premises of Byodo-in Temple Complex in Uji City in Kyoto. Don't forget to visit them when you come to see the newly renovated Phoenix Hall!

The Past and Present of Byodoin

Byodo-in could arguably be called the Sistine Chapel of Japanese temple art & architecture. The Phoenix Hall's Amida Buddha was created by Jocho, a prominent sculptor.

Views of Byodo-in at Uji, taken from the path outside the temple grounds, with tiled roof tops rising above green trees.

Searching for Ryoma at Teradaya Inn

This is the place where Ryoma Sakamoto was attacked by authorities. His wife Oryo saved him by running naked from the bath to inform him of the coming danger!

Uji is thought to be the first place in Japan to have mastered tea growing. Thus, it makes sense that Uji is so well-known for matcha. Masuda Tea Store is about a fifteen to twenty-minute walk from JR Uji station and is located right across from the main gate entrance to Byodoin Temple - the temple most people would recognize as the building on the 10 yen coin.

Visiting the Kansai region and wanting to try one of the signature dishes of Western Japan, “Okonomiyaki?” Or, have you already tried and loved the dish in Hiroshima, but are craving the delicate flavor of bonito flakes, grilled cabbage, soft and tender pork strips, and maybe even grilled octopus if you’re feeling for the flavor adventure? Look no further than NoBoRi (のぼり in Fushimi, Kyoto.

Torikizoku is a popular and affordable yakitori chain store in Japan. What is yakitori? Yakitori is grilled chicken served on wooden skewers in a variety of flavors - teriyaki, spiced salt, spicy, and more. Torikizoku serves extremely tender “Momo Yakitori,” which is the signature chicken meat skewer of many yakitori restaurants, and is a favorite for fans from around the world.

Located in Uji, the city renowned for green tea, Ujigami shrine is Japan’s oldest existing shrine. Among the country’s thousands of shrines, Ujigami shrine was one of the first — allegedly built during the year 1060. Although the shrine is rather off the beaten track, its convenient location makes it easy to combine visits with nearby Byodo-in Temple and Uji-gawa Shrine. Ujigami-jinja’s grounds are quiet and serene, located away from the bustling tourist attractions in central Kyoto. It was originally built to honor Emperor Ojin and his sons, after one of the princes committed suicide in a selfless effort to solve the dispute over imperial succession. Now, Ujigami shrine also serves as the guardian shrine for Byodo-in Temple. Visitors to Ujigami-jinja will also notice the abundance of rabbit motifs. The puzzling presence of rabbits is related to a myth about a divine rabbit that guided the lost prince back to town. Since then, the rabbit has been honored in the form of figurines, omikuji and more in the city of Uji. The temple’s springwater is said to have special qualities, making it the best choice for use in traditional tea ceremonies — rated to be among the 'Seven best waters of Uji'. Its main Honden building is also believed to be the oldest remaining example of nagare-zukuri-style architecture. Being host to such historically significant sites, it is no wonder that Ujigami-jinja was designated a UNESCO World Heritage Site in 1994.

Ōbaku-san Manpuku-ji is a temple located in Uji, Kyoto. It is the head temple of the Japanese Ōbaku Zen sect, named after Wanfu Temple in Fujian, China. The mountain is likewise named after Mount Huangbo, where the Chinese temple is situated. [Wikipedia]

Founded in 874, Daigo-ji Temple is one of Kyoto's most scenic religious sites. The hillside temple grounds make it a prime spot for cherry blossom and fall foliage, and its traditional buildings add to the rustic charm of the landscape. The main temple grounds are located is at the foot of the mountain and is connected to several other temple buildings around the summit via a hiking trail. The Daigo-ji also plays an important role in the Shingon sect of Japanese Buddhism. Its main buildings are home to dozens of valuable cultural artifacts, which has resulted in the Daigo-ji Temple being named a World Heritage Site by UNESCO. The main area of ​​the temple is home to the Reihokan Museum, which preserves and exhibits the temple's vast collection of historical documents and art objects, including statues and paintings.