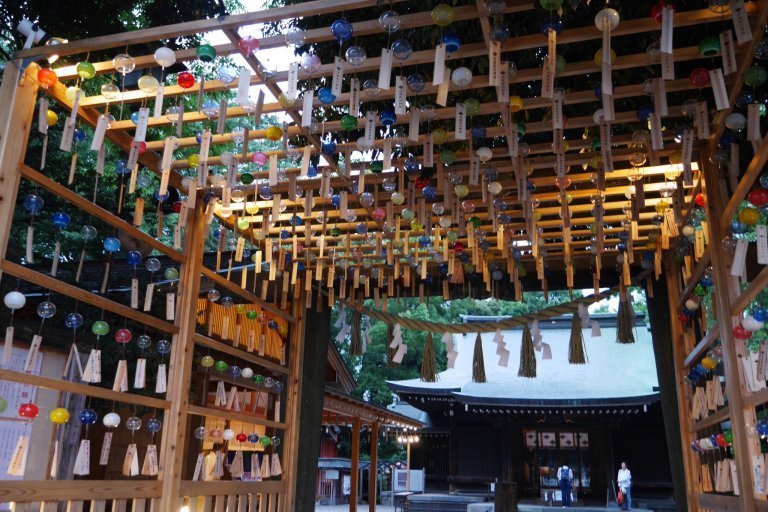 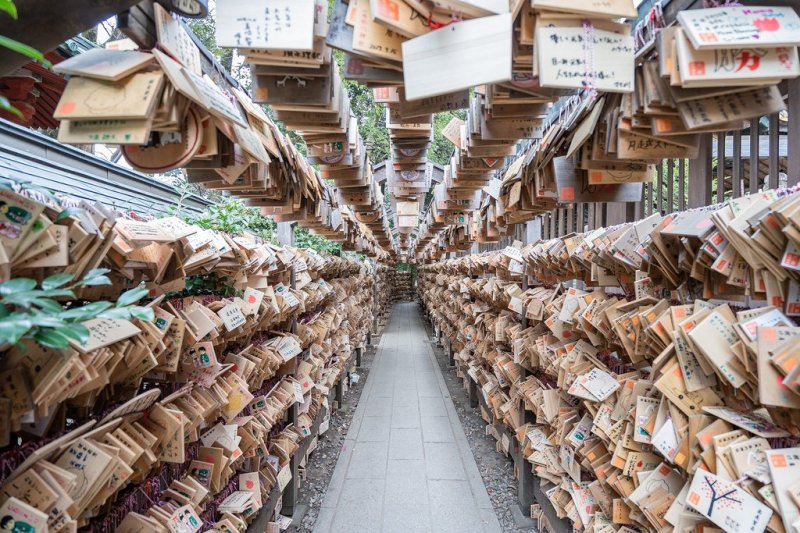 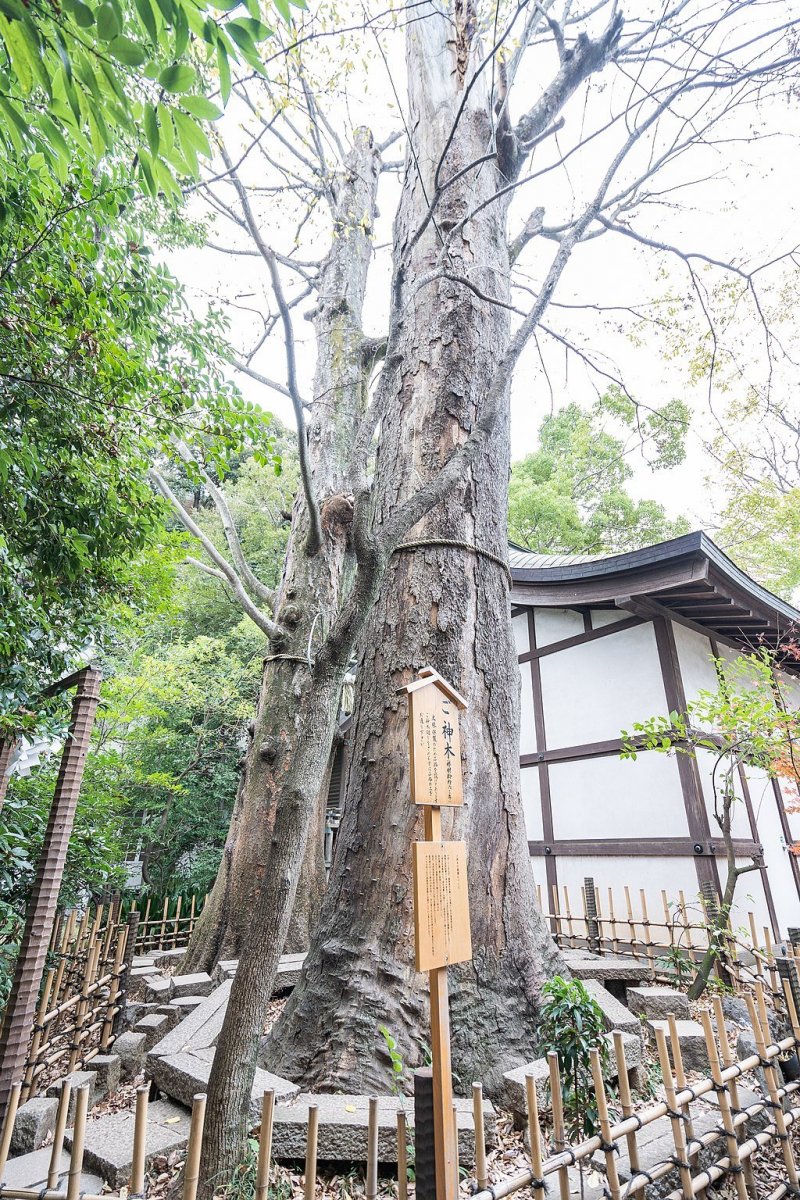 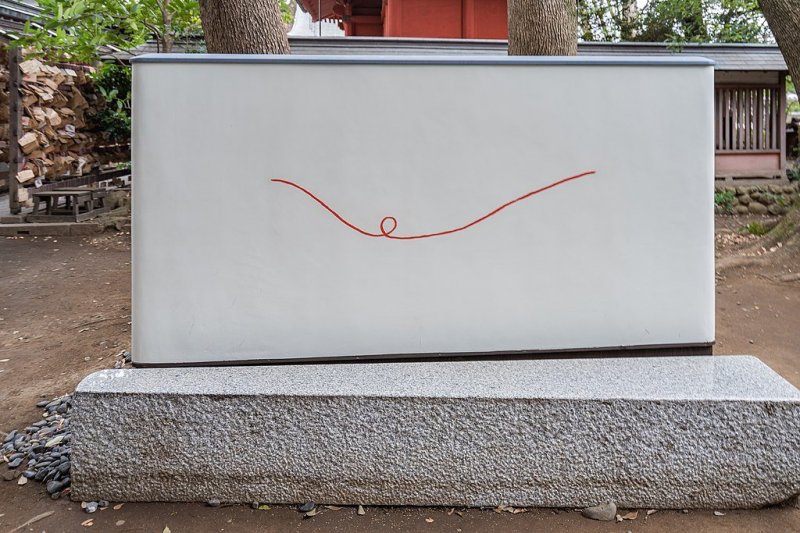 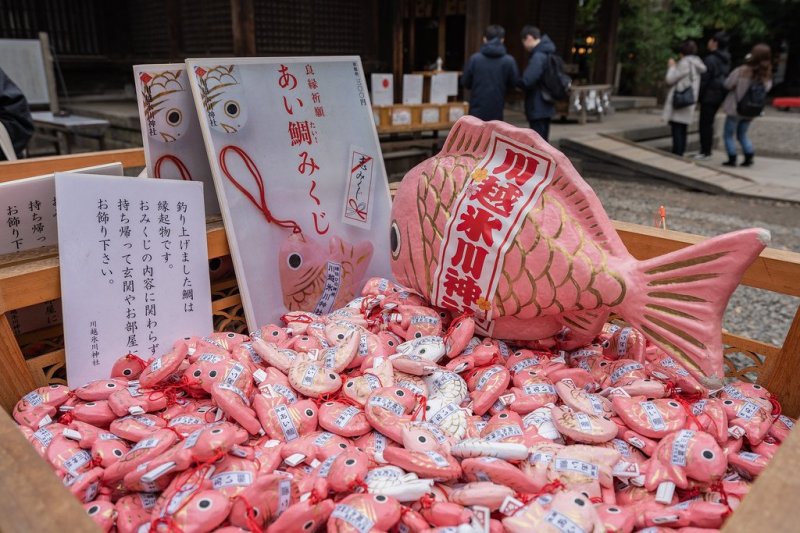 The entrance to the shrine is marked by an impressive 15-meter-tall torii gate, which is painted bright orange and said to be the largest wooden torii in Japan. After you pass under the torii, purify yourself at the chozuya by ladling water from the wooden trough onto your hands.

The elegant shrine buildings, interwoven with nature, make for a picturesque environment where positive vibes float on every breeze. Peruse the collection of more than 20 shrine structures of varying sizes and shapes and enjoy the lush nature, which features a tranquil stream running through the grounds. Listed below are Kawagoe Hikawa Shrine’s most popular sights and activities.

One of the shrine’s most popular features is the Ema Tunnel, which is a wooden, open-air tunnel decorated with approximately 30,000 wooden prayer plates called ema. The collection of words and the gentle melody of the ema in the breeze make for a truly unique stroll. Write your own ema and add it to the thousands of wishes and words of gratitude.

From July to September, Kawagoe Hikawa Shrine decorates its grounds with thousands of multicolored wind chimes. Enjoy the relaxing symphony of the chimes and visit the grounds at night to see the spectacle illuminated.

Located behind the main shrine are two massive 600-year-old zelkova trees. Walk around the holy trees in a figure eight to pray and gain spiritual insight.

The red pencil is a matchmaking charm that is symbolic of the red string of fate. As the pencil gets shorter, it is said that the distance between you and your destined partner shrinks. Purchase this popular charm and watch your fate reveal itself each day.

Fish for a Red Snapper Omikuji

Another popular charm is the red snapper omikuji, or fortune slips. Let destiny guide your hand as you use a small fishing rod to catch your fish-shaped fortune.

The wind chimes at Kawagoe Hikawa Shrine are known far and wide, but for the month before the illustrious wind chime event, you can see equally beautiful pinwheels.

The Enmusubi Wind Chime Festival in Kawagoe is the perfect way to celebrate summer in Japan.

Kawagoe’s Hikawa Jinja, separated from the main Omiya Hikawa Shrine over a century ago, is a great quaint location to end your day. The shrine is open from dawn until dusk, giving visitors plenty of time to pray, view the ema and souvenirs, and take plenty of photos. Even on a rainy day, the shrine remains a staple attraction for foreigners and Japanese alike.

There is always something happening at the illustrious Kawagoe Hikawa Shrine. No matter what season, the shrine is very photogenic. However, there are times in the year when it is more "instaworthy" than others, such as New Years and during the summer.

Kawagoe Hikawa Shrine closed their function rooms and Musubi Cafe on August 2nd. Currently, they are tearing down the old building. By the end of 2022, they will open a much smaller building to house their function rooms. The rest of the area will be transformed into a park.

The Enmusubi Wind Chime Festival in Kawagoe is the perfect way to celebrate summer in Japan.

The wind chimes at Kawagoe Hikawa Shrine are known far and wide, but for the month before the illustrious wind chime event, you can see equally beautiful pinwheels.

It is easy to navigate the place. I just needed 10 minutes to walk from Okegawa station to Hotel Route Inn Ageo. As I first visit to this hotel, I can truly feel the friendly and cheerful of the staffs. I stayed in twin room and found a spacious guest will find chic furnished stuff with some of other facilities, such as TV, working desk, refrigerator, air conditioner, and shower room fully equipped with spacious bathtub and bath amenities. Not to forget, you can easily access the internet by the facility of WiFi or LAN. You still can catch up with family or maybe manage your work during your stay here.

Korekaki, a contraction of Kore Ga Kakigori, is a shaved ice and snow cone specialty cafe in the tourist city of Kawagoe. Located along the route from the famous Kawagoe Hikawa Shrine to the storehouse district, it is a great spot for a take out or dine in shaved ice treat.

Nagamine-en sells dozens of green tea products made from Sayama green tea, grown locally in Kawagoe. On the second floor they have a cafe where you can sample fresh green tea and tea flavored treats. Moreover, the building is a beautiful Edo period style design.

One of autumns's best treats in Saitama are the famed sweet potato chips from the food stand Koedo Osatsuan. They're located in the warehouse district of Kawagoe.

Kitain (喜多院), located in Kawagoe, is a 9th-century temple renowned for its collection of 540 playful Rakan (statues of Buddha) and for being home to the only remaining buildings of the former Edo Castle. History Founded in 830 by monk Ennin, Kitain was originally part of a three-temple complex named Muryoju Temple, which included Kitain (North Temple), Nakain (Middle Temple), and Minamiin (South Temple). During the early-14th century, Kitain became the head temple of the Tendai Sect in the Kanto region. Later, in 1599, it became the main temple of Muryoju under the guidance of head monk Tenkai, who had strong relationships with the first three shogun of the Edo Period. In 1638, after a fire destroyed most of Kitain, Shogun Iemitsu ordered several buildings from Edo Castle to be moved to the temple to help rebuild it. Although the fire was tragic, the castle buildings’ relocations likely saved them as Edo Castle was later heavily damaged by the Earthquake of 1923 and World War II. Today Today, Kitain’s preserved castle buildings and whimsical statues make it a must-see spot in Kawagoe. In spring, the temple is especially beautiful when cherry blossoms color the sacred area pastel pink. Other noteworthy spots are the temple’s pagoda and traditional gardens. Wander the tranquil grounds, and find the spots that speak to you. Listed below are Kitain’s top delights:

A special event at the Kawagoe City Museum looks at the works of Yoshida Hiroshi (1876 - 1950), a renowned Fukuoka-born painter who also developed skill in woodblock prints later in his career.

Kawagoe offers distinctive architecture and a trip down memory lane. Stroll its streets and soak in this slip back to the Edo period.