Trying out Tokyo's first and only snake cafe!

Sometimes you just want a cute companion to spend your afternoon coffee with. A furry puppy, a purring kitten, a fluffy owl...all of these can be found in various animal cafes throughout Tokyo. Recently, with Tokyo's temperatures steadily dropping, some hot tea and something cute sounded right up my alley, but choosing a place was the hardest part. I have dogs and cats back at home, but I had never held an owl or pet a goat. And played with a snake?? I've run from one or two before, that's for sure, but when Tokyo Snake Center came up as one of Harajuku's newer cafes it sure sparked my curiosity.

Last year in 2015, Tokyo Snake Center opened its doors as Tokyo's first snake cafe. From an ex-salaryman's dream and love of snakes it became a reality which today is home to over 60 snakes of 25 different species. Since I had only spent my time near Harajuku's Takeshita fashion street, I thought a snake cafe would be just the spot for a new experience. Even for those like me who have never thought to themselves "Hmm, today I would really like to have a snake slither around my neck," it was an experience I won't forget.

The cafe was cozy, as it has to be the perfect temperature for your new snake friends, or as they're called here "table attendants." Before you are seated, you get to choose what table attendant will accompany you from the shelves in the entrance.

Feeling a little patriotic, I chose a Mexican Black King snake, whose name was "Kurohime,” or "Black Princess." Each table attendant was of a different species and had a personality. Black Princess was pretty lively from the moment I sat down. I couldn't touch her since she was in a plastic cage but I sat in wonder as she would occasionally just look at me, maybe she knew we were originally from the same place. You can switch out your table attendant at any time and as often as you want. Black Princess fell asleep after a while, so I got a new table attendant to match my mango ice cream float - a vibrant yellow snake named Tsukushi. After I finished my float and bid my farewell to my new buddy, I decided I was ready for the next step.

Guests can choose to pay for a petting session which is only an extra ¥540! You can choose up to two snakes to pet at the petting area, which consists of two red couches at the end of the cafe. I asked to meet the friendliest snake and the biggest snake, figuring if I ever got the chance to join Slytherin house at Hogwarts, I should get as much experience as I could. The first snake I got to meet was a brick-colored corn snake named Amelie. The owner of the cafe is there throughout the sessions to lend a helping hand. He placed a towel on my lap and then laid Amelie in my hands. To my surprise, her skin was extremely soft and felt so pleasant to the touch! She loved to move and kept wanting to explore my back and at one point she almost made it inside my shirt. Amelie was easy to pick up and move after I gained some confidence in my newly acquired snake handling skills.

Next I got the hefty Jagger, who was a lot heavier than Amelie. I asked the owner to place him around my shoulders because by this point I was really feeling my inner Medusa. He seemed to like wrapping himself around my arms and hands, so I like to think I got some snake hugs as well. We took awesome selfies together as Jagger was a natural model. I found myself saying "kawaii" a million times, along with the other cafe-goers. Many of the people that go to Snake Center have little experience with snakes. The atmosphere was one full of discovery and giggles as other curious people also found their hearts stolen by the some of the gentlest and cutest staff I've ever seen. 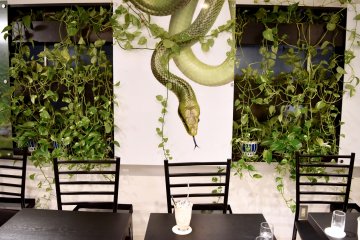 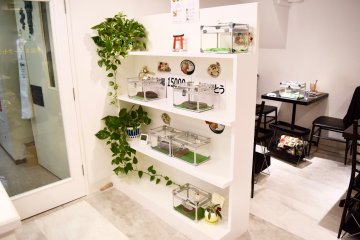 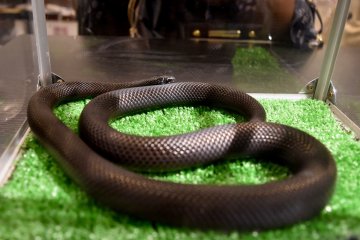 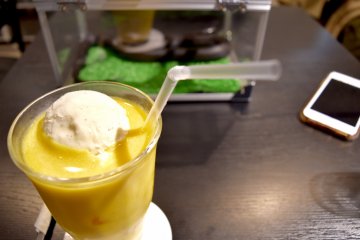 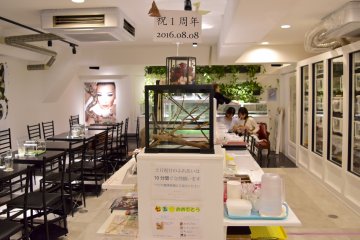 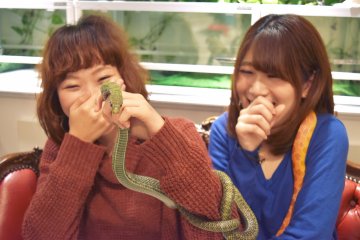 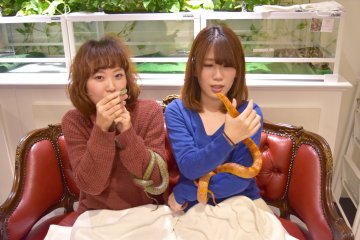 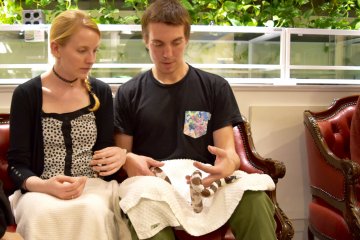 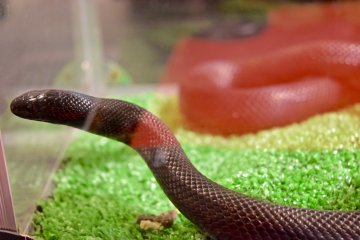