Is it worth waking up for?

I cautiously introduce to you, ten ingredients you probably wouldn’t like to see in the same bowl of ramen:

with a generous sprinkling of Japanese parmesan cheese, because that’s what you were missing.

Is this the antithesis of Tampopo, the Japanese movie about a woman trying to create the perfect bowl of ramen? Probably. In spite of this, let's take a look at the story behind coffee ramen.

The restaurant’s name is 亜呂摩, or Aroma, and it’s located in Ohanajaya, Katsushika district, in Tokyo. Rookie word of advice: try to check when they have an off day. Some websites don't show any holiday, but when I went, they were closed Wednesdays. I carelessly made that mistake the first time, and in addition to being greeted by a closed sign, a typhoon mercilessly smited my umbrella.

The chef is an elderly man, affable and used to meeting foreigners. Not that the restaurant gets too many non-Japanese tourists in the first place, but he’ll likely ask you to sign a guestbook, before consuming said ramen. (Even if you don't speak Japanese, those handy picture menus are available for your giggling pleasure.)

He told me he changes the ingredients, or toppings might be a better word, every once and again, but don’t fret, parmesan cheese is a staple garnish. You can try it hot or cold, but because I wanted to make it back to my hotel without being slumped over the whole time, I tried it cold.

Oh, and I don’t even drink coffee.

This is a great dish to prepare for your significant other when you’re about to break up with her/him. Unless she/he is interested in this kind of stuff, then you’re sending all the wrong signals.

After all of the muted hype, it was quite alright; better yet, as of March 2013 it cost only ¥700. The noodles were artfully cooked, and the chef appeared humbled by his bizarre creation. Sure, that pink and white ninja weapon is none other than kamaboko, patiently seated atop banana and kiwi slices, and the coffee bean riding the egg yolk evokes Salvador Dalí, but the majority of the dish, true to its name, had the flavor of (sweetened) coffee, which apparently keeps bringing ‘em in.

Don’t cower out and eat the toppings by themselves. That ham looks way too relaxed on the sidelines. Take a piece, then scoop out some kiwi and egg, dip it into the murky broth and slurp to your heart’s content. Fact is, I rarely eat any type of ramen, since most of the time I feel as if I’m in a salt mine while doing so. Also, if you’re not too adept at using chopsticks, it would seem wise to eat ramen when you’re not wearing your own clothes.

I'm originally from the NYC-area, though I've also lived in various cities in East Asia for a total of more than three years. Language study is one of my hobbies, and a pivotal reason for this is to decipher menus. Fluent Eater. I'd like that title. I have been keeping a travel and food blog, ... 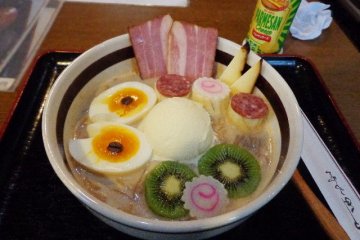 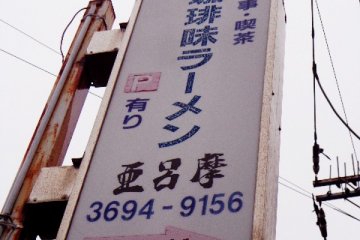 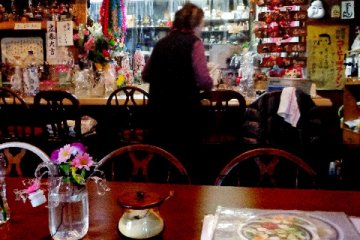