Japan's most popular meeting point in the heart of Tokyo

One of Japan's unofficial landmarks, the Hachiko statue in Shibuya is a homage to the faithful Akita dog who waited at Shibuya Station every day for his master, even after his death. Today, it’s one of the most popular meeting places in Tokyo.

The Story of Hachiko

Professor Eizaburo Ueno of Tokyo University adopted Hachiko in Akita prefecture in the early 1920s. The two were inseparable, with Hachiko accompanying his master to Shibuya Station each day when the professor would head off to work at Tokyo's Imperial University. The faithful pup would come back to the station each afternoon at 3pm to greet Ueno upon his return. Unfortunately, the professor died in 1925 while at the university and never returned for a final goodbye with his pet. However, the loyal Hachiko continued to visit the station daily until his own death nearly 10 years later. His own death made headlines, and he was cremated and buried next to his beloved owner.

This story became a legend and a small statue was erected in front of Shibuya Station to commemorate Hachiko. This statue is now a typical starting point for anyone visiting Shibuya, and a convenient meeting point for friends and occasionally tour groups. Locals and foreigners are always queuing for photos with the statue, just meters away from Shibuya's popular Scramble Crossing.

Other Hachiko Statues in Tokyo

While Hachiko's body was cremated, his fur was preserved and it was later stuffed and put on display at the National Museum of Nature and Science in Tokyo's Ueno Park. A second statue was also erected in front of Tower Records in Shibuya, to commemorate the 20th anniversary of its relocation.

There is also a Hachiko Family Mural, on the wall of the station opposite the original statue, where artist Ryutaro Kitahara dreamed up and sculpted a bit of canine company for the faithful dog. There was even a Hollywood movie made in 2009 called Hachi: A Dog's Story which starred Richard Gere, and was essentially an English language remake of the original Japanese film Hachiko Monogatari (Hachiko's Story).

And for those who like a happy ending, yet another statue of Hachiko was dedicated in 2015 in the grounds of the University of Tokyo. This one, however, imagines a joyous reunion between the loyal Hachiko and his beloved owner Ueno. 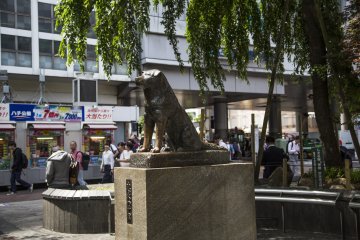 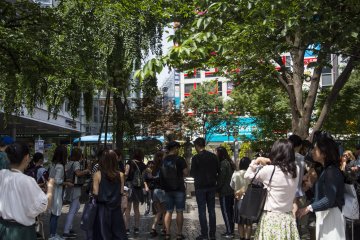 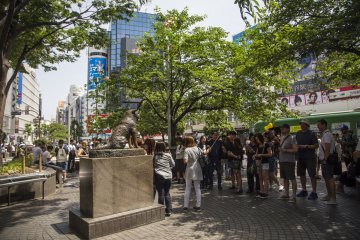