The philosopher of Japan

Inoue Enryo was not idle. A Japanese philosopher, reformer of Buddhist thought, professor, and writer, Inoue was the energising force behind Japan's acceptance of Western philosophy during the Meiji Period. He also founded Toyo University, Japan's first Society of Philosophy and designed the Tetsugakudo Park in Tokyo's Nakano City.

Nicknamed the Ghost Doctor for his studies explaining Japanese folk mysteries and superstitions, Inoue grew up being prepared to inherit his father's Buddhist temple. Sent to university in Tokyo, he soon began exploring Western notions of philosophy and his eclectic world view was on display soon after his graduation when he honoured Buddha, Confucius, Socrates and Kant.

Inoue worked hard to introduce philosophy into Japan. He set up publishing house, edited journals, travelled both Japan and the world on lecture tours, critiqued Christianity and found time to also reform Buddhism, showing it to be compatible with the modern scientific society that he was helping to create.

A pioneer for Japanese studies of philosophy, by the end of his life, Inoue was deeply involved in setting up schools and, inspired by Western notions of nationalism, teaching 'national morals'. During is life he was an immensely popular both as a teacher and as a public figure whose books were read across Japan as well in other parts of Asia.

Even though philosophy has moved on since his work, Inoue's research, thinking and enthusiasm motivated a generation in a way that was unheard of and his pioneering influence is still acknowledged to this day.

While giving a lecture overseas, Inoue Enryo passed away on Friday, 6th of June, 1919. His final resting place is located close to Tetsugakudo Park, in Nakano City.

Inoue Enryo's grave, located just past his Tetsugakudo Park, is about a 14-minute walk from the North Exit of Araiyakushi-mae Station on the Seibu Shinjuke Line. 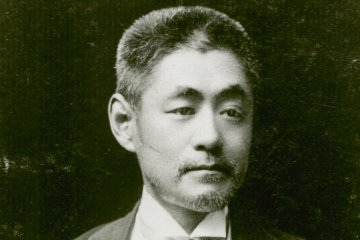