Chinese style steamed buns were first introduced to Japan in the 1920s and while there may be a variety of fillings, pork filled steamed buns (called "nikuman") were and remain to be the most popular. What is not to love about a warm bun made of a soft fluffly exterior, and a juicy filling of ground pork and vegetables?

Kagurazaka Gojuban was first established in 1957 (the Showa Period). For over 60 years, this flagship store has operated practically opposite the striking Bishamonten Zenkoku-ji Temple in the middle of Kagurazaka shopping street. Up till today, their steamed buns and dim sum are still prepared by hand, one by one, from fresh, Japan-sourced ingredients (and only ingredients where the producers and places of origin are known) using traditional techniques passed on from generation to generation.

Gojuban has become a landmark in the famous Kagurazaka shoppping street in Iidabashi. The store is frequented by regulars in the neighborhood but also by visitors who come from far away and purchase an armful of Gojuban goodies for themselves and to give as presents. Their number one bestseller is the regular sized nikuman (¥393), a recipe that hasn't changed in decades. We also tried the gomoku bun, which at ¥638 is almost twice as big as the nikuman and filled with the most premium ingredients: pork, shrimp, bamboo shoots, ginkgo nut, quail egg, button mushroom and shiitake mushroom.

The shop has a small standing area with a table with complimentary wet towels, mustard packets and service tea for people who want to enjoy their warm steamed treats immediately. Those who prefer to take their buns home opt for the chilled products which can be warmed at home by steaming or by microwave.

Gojuban has five other branches all over Tokyo, but it is worth it to visit this flagship store if you are in the area anyway for its historical significance. 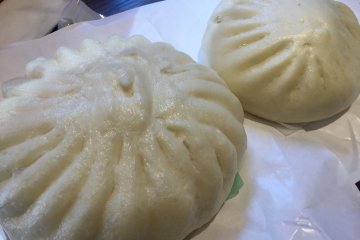 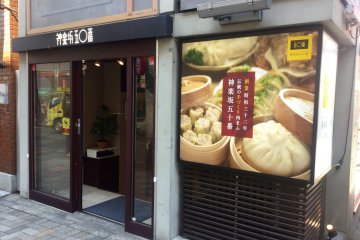 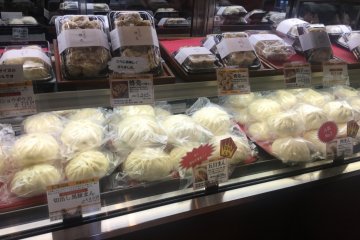 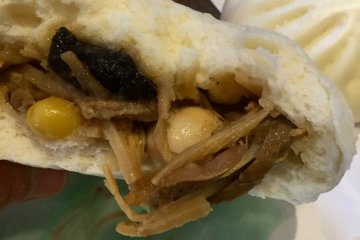