A temple of plenty of fortune in Katsushika City Ward

If Shibamata is known for its history and retro Showa-period culture, then perhaps some of the good fortune that has blessed the area is in part due to Jurojin, the deity of fortune and longevity. One of the seven gods of good fortune that flirts about with Japanese religious tradition, particularly during the New Year period, Jurojin has his very own temple dedicated to him in the area.

Manpukuji Temple, the temple of ten thousand good fortunes, is part of the shichfukujin-meguri. A common mini-pilgrimage walking course, the meguri sees worshippers - and the culturally curious - visit seven temples and shrines dedicated to the seven deities in order to pray for good fortune over the coming year.

Located close to the famous Shibamata Taishakuten, Manpukiji Temple is a convenient little stop during a day of pleasant sightseeing in Shibamata. The temple was established in the area some time in the 1950s and has seen a continual source of visitors ever since. The temple is particularly active during the New Year period as visitors arrive to offer their prayers to Jurojin and collect the temple stamp as part of their pilgrimage stamp rally.

An engraved Heart Sutra, a Buddhist scripture, can be found on a stone spinning wheel just by the entrance to the temple. The basic idea is to reflect upon yourself as you spin the wheel to read the sutra. Another interesting detail of this temple is one of the kanji characters used to write its name. Rather than use the common character for 'man' which here means ten thousand - the sense being plenty - the character is the more archaic version, and more complex to write.

A charming little temple, Manpukuji Temple won't take up too much of your time as you tour the local area.

Take the Keisei Kanamachi Line to Shibamata Station. The temple is about a 5-minute walk east from the station exit. 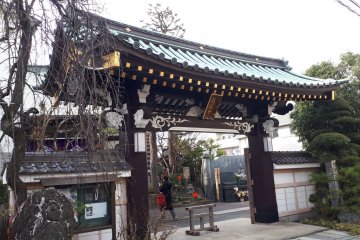 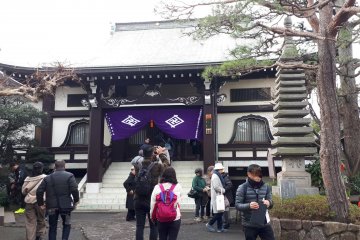 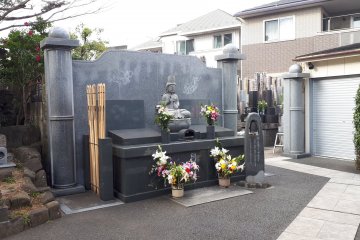 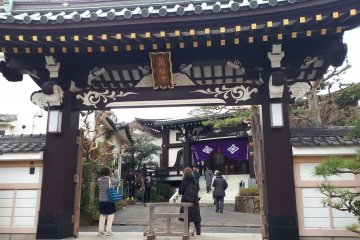