Exquisite Ramen and Tsukemen in Roppongi

As I was staring at the long line to get into the famous Ichiran ramen shop near midtown Roppongi, I decided I wanted eat somewhere not as well-known. Don't get me wrong, Ichiran has wonderful ramen, but after eating it many times I wanted to try something that felt new. So I walked around the block and found a group of salary men waiting to buy their food ticket for another ramen shop. That's when I found Menya Musashi Kosho, a tsukemen shop right around the corner from Ichiran in Roppongi. Menya Musashi is a new type of noodle shop chain where each location has their own style of noodles.

You'll recognize Menya Musashi from the distinct tiger logo and old wooden entrance. The shop's wooden countertops and minimalist decorations give it an air of traditionalism. The restaurant also plays jazz on the radio which is a nice juxtaposition to the traditional furnishings. The most distinguishable features of the kitchen are two giant pots of soup along with a giant wooden spatula.

The Roppongi location specializes in thick noodles and a fish stock based broth combined with soy sauce. The taste is like shoyu ramen but is has a clearer palette with sharp flavors of salt and pork. For the tsukemen (cold ramen dipped in thick soup), the sauce is bold and tasty. After you have finished your noodles, it's customary to pour the broth that's on the counter top into the sauce bowl, so the remains turn into soup. And the best part about the soup: the pork slices are huge. I don't say this with any exaggeration, their hearty slices of roasted pork meat are crispy instead of soft and mushy pork slices. The noodles have a wonderful hand-made quality to them and taste distinctly different from the thin noodles of the famous Ichiran or Ippudo ramen shops. While the tsukemen is obviously their number one seller, I would recommend trying out their ramen for its distinctly fresh taste. The ramen broth is a dark color and light bodied, completely different from the fatty soup broth normally associated with ramen.

Thick and fatty tonkatsu ramen is hard to eat during the hot summer months in Tokyo, so Menya Musashi Kosho is a really great alternative if you still want to eat noodles even on the hottest days. 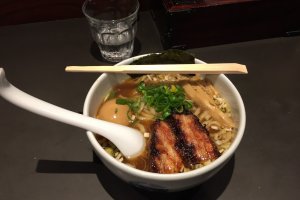 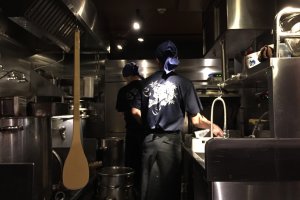 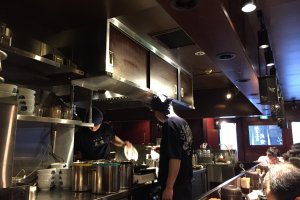 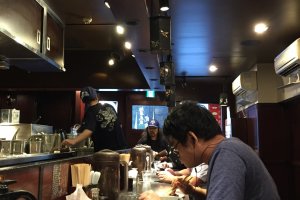 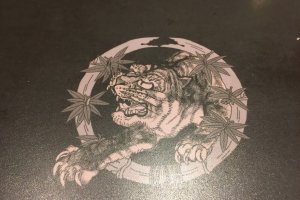 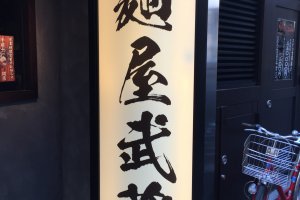